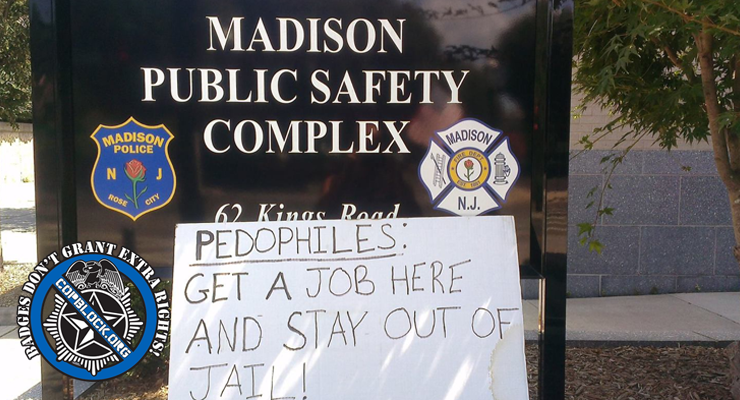 In February 2016 family members of the victim, a 17 year old female resident of Brunswick, Ohio, became aware she had sent nude images of herself to an adult male at his request via Twitter’s messaging app. The authorities were immediately contacted and the resulting investigation revealed former NJ State DWI Top Gun Award Winner, local school lecturer, and 9-year veteran of the Madison Police Department Chad Rybka was the recipient of the illicit photos.

At trial, Rybka admitted to knowingly possessing images of an underage female and being aware of her age at the time. His salary for these services in 2015 was $126,618.

Despite the obvious culture of pedophilia present within the department, and more importantly, her fiduciary duty to the juvenile victim, Assistant County Prosecutor Meg Rodriguez used her time in court to express concern for the “good officers of the Madison Police Department” who would have to “rebuild the damage (Rybka) brought to their department.” This in turn, led Judge Thomas J. Critchley to sentence the pedophile cop to two years probation and a fine of $905. Also as part of the plea, Rybka is prohibited from seeking public employment within the state of New Jersey ever again.

To provide contrast, Critchley, once sentenced a man to 11 years in prison for the non-violent crime of selling cocaine.

The Chief’s  improper use homophones aside, this statement is particularly ironic, and frankly, an insult to the intelligence of the tax victims who pay his salary. Dachisen is simultaneously claiming to enforce a “zero tolerancy policy” for pedophiles while freely admitting he refused to fire Rybka and instead allowed him to save face and resign.

At the conclusion of the trial, Rybka’s attorney painted the sentence as “a real loss to the department because he was a terrific officer and slated for great things.” Perhaps his child victims would disagree.