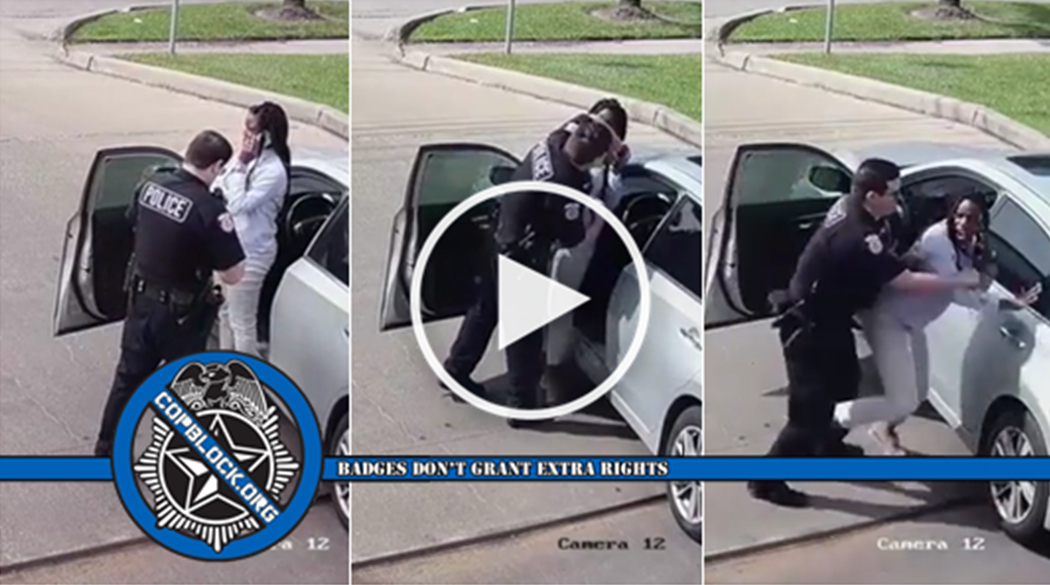 Video of a March traffic stop has been released showing a woman being assaulted by a Houston Metropolitan Transit Authority police officer while attempting to request help from a 911 dispatcher.

Houston social worker, Earledreka White, 28, was arrested and charged with resisting arrest after she was pulled over in the 10000 block of South Main Street by Officer G. Luca for allegedly crossing a double white line.

Surveillance video recorded from neighboring businesses show White get out of her car to find out why she was pulled over and to retrieve her drivers license. She said she mistakenly thought she left her purse in her trunk.

Luca is seen approaching white with handcuffs in his hand and ordering her to get back into her vehicle. White said the officer cursed at her and threatened her with a stun gun, so she called 911 out of fear. The audio of that call has also been released.

White is heard explaining to the dispatcher that she did nothing wrong and that Luca had no reason to pull her over before she asks for another officer to respond to the scene because she feels uncomfortable.

“I would like another officer to come out here,” White says. “My heart is racing. I’m really afraid. I have no record, I’m a licensed clinician, and I’m being threatened to be arrested… Can you please get someone out her please?”

White then tells the dispatcher her location and he redirects her to the MTA police department so that she can request another officer. While she is being transferred, Luca can be heard talking and shouting, but his words are indistinguishable.

“Please keep your voice down,” White tells the officer. “I’m not raising my voice at you. I’m being very respectful.”

After White is connected with the MTA police department, she tells the dispatcher she is being “harassed” by Luca, who then responds by grabbing and attempting to twist her arms behind her back. White is seen struggling and heard screaming for him to stop.

“This man is twisting my arm. Please get your hands off of me,” she says. “What is wrong with you?… Why are you doing this? I haven’t done anything. I am a woman. This man is about to tase me. I have never been treated like this in my life.”

White can then be heard sobbing, “You are hurting me! Oh my god, oh my god! Stop! Please, stop! Can you stop doing this!?”

White was charged with resisting arrest and spent two days in lockup before posting $1,000 bail. The misdemeanor resisting charge carries a sentence of up six months in jail and her attorneys are demanding it be dismissed.

“That’s not good police conduct,” said attorney Zack Fertitta, who plans on taking the case to trial if the charge is not dropped. “You can’t escalate a situation and then claim someone is ‘resisting arrest.’ That’s ridiculous.”

White filed a complaint following the incident and the MTA police department said they launched an investigation, which included viewing the surveillance video and 911 call. They found no wrongdoing by Officer Luca.

“She was uncooperative but he did everything reasonable within the law,” MTA Police Chief Vera Bumpers said. “He explained what was going on, what the violation was and that he was focused on her safety, as well as his… If you don’t feel comfortable or feel that you’ve been mistreated, you can always file a report later.”