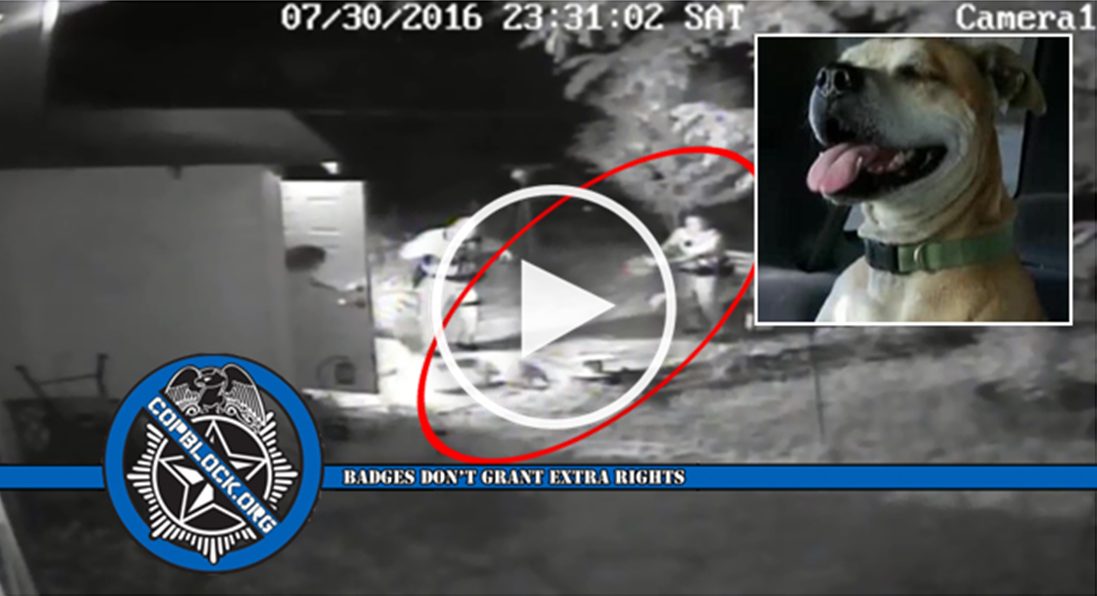 A Missouri woman is outraged and is demanding justice after an officer with the Kansas City Police Department killed her beloved 13-year-old dog, Sierra, in an incident caught on video.

North Kansas City resident Brandee Buschman said two officers showed up at her home near Parvin Road and North Cleveland Avenue at around 11:30 p.m. on Saturday after receiving a disturbance call from someone in the neighborhood.

According to Bushman, the call that had nothing to do with her property and she answered the knock on her door thinking nothing of it, as the officers did not announce who they were. Surveillance cameras would capture what happened next.

The footage shows the cops approaching the home with guns drawn before Bushman opens the door and Sierra runs out to investigate what’s going on. One of the officers is seen immediately firing at the animal, which Buschman rescued from a shelter more than 10 years ago.

The first shot did not hit Sierra, and the dog is seen turning back in fear and running toward the house. The officer then fires a second shot at the animal as it runs away, this time hitting it.

Shocked and appalled, Buschman scrambles to the ground to cradle her dying pet. She said she had pleaded with the officer not to shoot again after he fired the first round – and that after the second shot was fired – his partner arrogantly said, “Oh, too late.”

“They killed her and she died right there in front of my steps. She ain’t deserve that,” Bushman said. “My dog! She’s part of the family. She didn’t do anything, looking to see who was at the door.”

According to Bushman, the officers showed no remorse about the incident and didn’t apologize before they left without making any arrests. Kansas City police spokespeople later said the department planned on launching an investigation into what occurred.

Not surprisingly however, the department said in a statement that the officer feared for his safety and shrugged off the shooting by simply stating, “it is unfortunate when these incidents occur.”

“If officers fear being attacked by a dog they defend themselves from personal injury,” Capt. Stacey Graves said. “No one wants to see a family pet injured or killed. Officers are put in a difficult position in these situations.”

In recent years, the killing of dogs by police has become a contentious issue resulting in the creation of the term “puppycide.” Advocates of ending “puppycide” point to the blaring double standard that exists between police and the rest of the population.

While police dogs are more or less considered human beings in terms of the rights they possess when harmed by suspects, ordinary pets of private citizens killed or harmed by police enjoy no such protections.