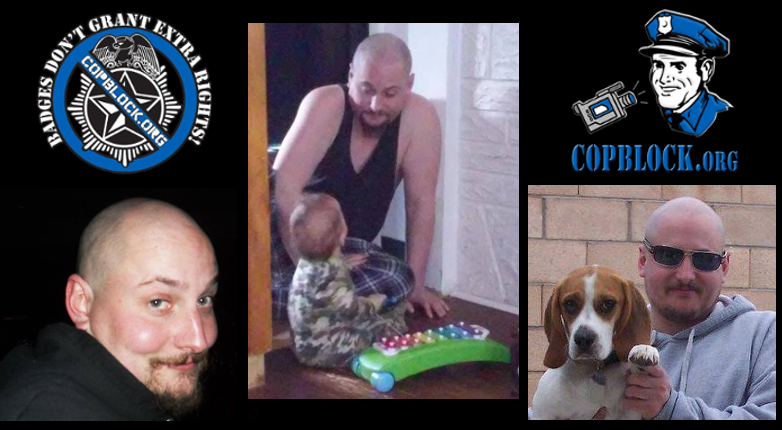 The post below is an unfinished essay that Sean Gruber had written at some point shortly before his death from a self-inflicted gun shot wound on August 1st. It’s extremely disheartening that he made that decision and I personally very much wish he hadn’t. However, I think if you read the statement he had written below some of the reasons why he did so are explained pretty clearly there.

Sean was a former resident of Las Vegas and well known and widely respected among “liberty activists” within Southern Nevada. He also was known locally and outside of Nevada for co-hosting liberty-based radio shows, as well as contributing writing to several websites. That included CopBlock.org and his posts that he either submitted or wrote directly for the CopBlock Network are included at the bottom of this post, within the “related posts” section.

A memorial is being held for Sean in Las Vegas on Wednesday, August 10th. Information on that can be found at the Facebook event page for it, which is located here.

I also considered Sean a personal friend after having met him almost exactly three years ago. The first time I met him was somewhat limited to an appearance I did on, the “Round Table Group,”one of the radio shows he was co-hosting. Even though we never really had the opportunity to get together as much as I would have liked to in person, over time I came to consider Sean a true and valuable friend, who was always very friendly and very supportive toward anything I was involved with. In fact, Sean was actually one of the very few people that I can’t recall ever having a real argument with.

In spite of his generally friendly demeanor, Sean was a very passionate and dedicated person and one of the things he was most passionate about was liberty and fighting against the tyranny that has been encroaching upon this country. Sometimes that passion manifested itself in very uncensored statements about those that were responsible for such tyranny. And as evidenced in his writing below, over the past several years Sean got to know well just how tyrannical the LVMPD could be.

The Las Vegas Metropolitan Police Department has a well deserved and long standing reputation as vindictive bullies toward anyone that dares to criticize them. They don’t just actively work to prevent accountability for cops, they target anybody who questions that favorable treatment. In Sean’s case, they not only targeted him to the point that he decided to leave town, but they even continued targeting him from afar after that.

In June of 2014, shortly after two cops were murdered here in Las Vegas, Sean pointed out in a Facebook post that the violent behavior and lack of accountability of cops had probably played some role in the motivation behind the shootings. As a result, someone reported him to Metro’s “Fusion Center.” In spite of the fact that they readily admitted what he had said was not a threat and was covered by free speech protections, the LVMPD still began actively harassing him and even his family afterwards.

A similar Facebook post, in August of 2014, by a family member resulted in that family member being fired from their job after the police put pressure on the casino where he worked, since they couldn’t do anything legally (because of that First Amendment thing again). Soon after that, Sean and his entire family moved to new Hampshire in an attempt to get away from the harassment by the Las Vegas police and find a more liberty minded location.

It wasn’t too long after that, when Sean applied for a concealed weapons permit in New Hampshire, that he discovered the LVMPD had placed him on a list of “dangerous people.” This was in spite of the fact he had never been arrested or even charged with a crime of any sort. Sean in fact hadn’t even so much as been questioned by the police with the exception of the ones who responded to him making a Facebook post former Sheriff Gillespie didn’t like.

This arbitrary designation by “the criminal gang that calls themselves the Las Vegas Metropolitan Police Department,” as Sean (correctly) put it, prevented him from exercising his gun rights without basing it on any actual criminal behavior or violent actions. More so than that, what it did was show that even after he moved to the other side of the country they weren’t going to let him be. He also became concerned that the police would target his family in the process of their vendetta against him, even possibly involving violence against them should they find some excuse to raid his house.

While nobody from the Las Vegas Metro Police physically pulled the trigger that day, the reality is that they might as well have. I have no doubt that their vindictiveness and unwillingness to let it go, even after he had left their designated gang territory, to the point that he felt his presence had put people around him in danger played a large part in the very unfortunate decision he made. As far as I’m concerned, the LVMPD has blood on their hands as surely as if they had shot him themselves.

At some point, or at some time, I’m pretty sure I said, “All Cops Deserve To Die.” I’m not taking that back. Even if I could, I probably wouldn’t.

Policemen are gang members. I’m not sure all of them realize this. But I’m not responsible when it comes to explaining the reality of the world to fools – hooligans, criminals, and modern day Redcoats. It’s simply not my job – and if it were – I’m not getting paid enough.

I moved across the entire country (Las Vegas, NV to Newport, New Hampshire) because I knew I had pissed off the criminal gang that calls themselves the Las Vegas Metropolitan Police Department. I’ve been trying to de-escalate this shit for a while now. (I will admit a few times I got drunk and said what was actually on my mind – that usually consisting of pointing out that criminals – even if they have cool uniforms and pistol belts – are still criminals and deserve to be treated as such.

However, I’ve never done a thing. The one time I was contacted by LVMPD, a detective, I believe by the name of Gnu stated (and I’m paraphrasing here), “We have looked at your Facebook posts and all we see is First Amendment stuff, but we were just directed by Sheriff Doug Gillespie, to contact everyone that might have anything to do with Jerad and Amanda Miller.”

He was fairly nice to me – I suspect that is because I had legal counsel there, but I’m no Nostradamus. I do know this much – Metro are a bunch of lying, criminal, murderous, shit heads that didn’t get even one-one-hundredth of the percent of shit that should have been brought down upon them on that day.

Does that make you lying group of criminals uncomfortable? Do you even know the history of your own department? I don’t give a hot fuck and I don’t suspect that you do either. Now it has come to my attention that the Las Vegas Metropolitan Police Department has decided to unilaterally declare me as a “Dangerous Person”.

Now, I’ve been in this game for over half of my 35 years on this planet and I’ve never heard of this before. Since when did my calling Metro a bunch of sister fucking assholes constitute a crime? Hell, if the truth is a crime – I’m out of business.

The truth about me isn’t very nice for the “powers that be.” I’m very boring. I’m a thirty five year old man. I live on odd jobs and my family’s charity. I have no criminal record. I’ve never been arrested. I’ve never been convicted of a crime. I’ve never even been charged with a crime. I do own some guns – and I do have some self-respect and if I’m pushed too far I’ll shoot at those – that pushed – even if they have a badge. But I’m essentially not a “dangerous person.”

Fuck, If I’m dangerous and you aren’t…you might want to take a look in the mirror and ask yourself a question about where your allegiances lie and if you are a man or simply, a Brit. Are you “dangerous” if someone shits on you? Lies about your friends? Tries to kill some of them and tries to take some of the others’ kids? How indoctrinated are you?

Did LVMPD not realize I was going to get pissed off and write something? The answer is that that they don’t care. Because all of the ruckus in the world I could cause won’t mean shit in comparison to how easily they made my life harder…and this is the reason cops deserve bullets. From the rooftops. Pipe Bombs in their tailpipes.

You asshole’s push me and I’ll say what I mean. I hate you. You made me hate you. I didn’t like cops when I moved to Las Vegas – I left with a paranoid hatred of which I can barely describe. Go shoot Erik Scott eleven more times. Go cap another thirteen year old boy – who was already handcuffed – and talk to me about your heroic tendencies. I’m fresh the fuck out of giving a fuck.

I’m still not threatening you. You fucker’s aren’t worth the blood I’d have to spill. But I wish cancer upon you all.