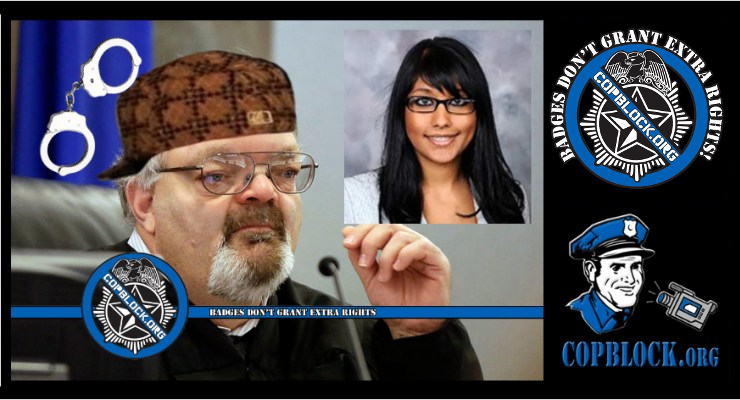 On August 2nd, a contempt of court charge filed by Judge Hafen, a Las Vegas Justice of the Peace, against Zohra Bakhtary was thrown out by a Clark County district judge.

This is the second public rebuke of Hafen, who received much publicity and criticism when he ordered Bakhtary to be handcuffed by a court marshal during court as the deputy public defender was attempting to represent a client. In June, during the Nevada primary elections, Hafen was defeated by Amy Cheline in a landslide, rendering him a former judge, effective in January.

In addition, the client whom Bakhtary was attempting to defend at the time she was, according to Hafen, “taught a lesson” by being handcuffed in open court, has also been ordered released by another judge.

Bakhtary’s attorney, Dominic Gentile, said Hafen had confused Bakhtary’s “zealous defense” with obstruction of justice, and she was never given the opportunity to speak on her own behalf.

Nick Crosby, a lawyer representing Hafen, argued that attorneys should uphold a professional demeanor in court, speak in their own time with relevance and moderation, and allow the court to do its job without interference.

After Hafen ordered a court marshal to handcuff Bakhtary on May 23, she was left to sit silently, while her client was sent to jail for six months on a larceny charge.

In his contempt order, Hafen wrote that Bakhtary displayed “disorderly, contemptuous or insolent behavior” and that he had “asked defense counsel on numerous times/occasions to not interrupt” him while he was issuing his decision.

Bakhtary, 30, has said she was not trying to argue with the judge. She was released from the handcuffs after about three minutes, after the judge declared that she had “learned a lesson.”

Throwing out the contempt charge, District Judge Gloria Sturman ruled that Bakhtary was denied due process and not allowed to speak in her own defense or call her supervisor before a marshal handcuffed her and placed her in the jury box of the courtroom.

In response to Sturman’s ruling, Gentile said, “At a minimum, it means that judges need to understand that they themselves may not like what a lawyer is doing, but that does not mean that they can capriciously and arbitrarily hold them in contempt. It also means that lawyers have a duty to zealously represent their clients. And sometimes that means standing up to a judge that’s wrong.

“Zohra exemplified what it means to be a zealous advocate. She really establishes herself as a model for standing up when you have to, even at a personal cost, such as this was to her.”

Bakhtary, who called being handcuffed in court “humiliating,” has not appeared before Hafen since the incident. Her client at the time, Daniel Fernandez, was later released from jail after another judge ordered the larceny case closed.

“The court’s constitutional duty is to listen to arguments, not silence them,” Bakhtary said. “While this act of physical restraint did not diminish my passion and devotion to continue to represent the indigent, it was extremely disturbing that the court continued to sentence my client without an attorney after having violated his right to counsel.”

At this point, it’s pretty clear who was in the wrong in this little standoff. Soon to be ex-judge Hafen not only went overboard while trying to show who the dictator in his courtroom was, but obviously picked the wrong time to do so, in light of the proximity to the elections and the (proper) reaction of local voters.