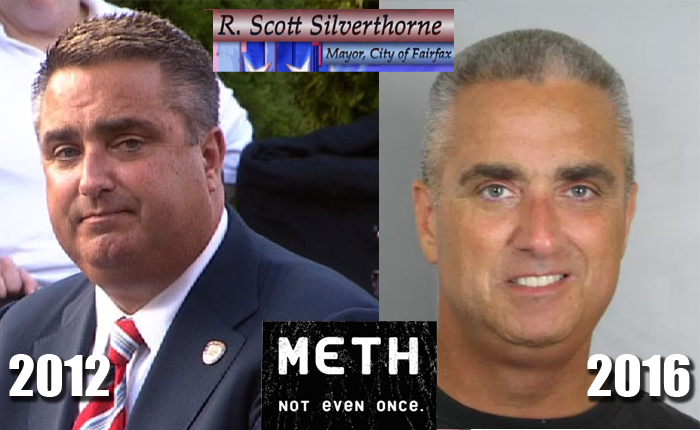 Following in the footsteps of  Marion Barry,  another DC-area mayor has experienced a stunning fall from grace as the result of a drugs and sex scandal. Yesterday, the Fairfax County Police Department arrested Fairfax City Mayor Richard “Scott” Silverthorne in an undercover sting where Silverthorne is alleged to have traded methamphetamine for sexual encounters with men.

The Fairfax County Police Department press release describes how this order giver became a target of the order followers:

In late July, the Organized Crime and Narcotics (OCN) Division received information about a possible distributor of methamphetamine and immediately began an investigative inquiry. Based on information obtained during the investigation, a suspect was identified who was allegedly distributing methamphetamine through a website used to arrange for casual sexual encounters between men.

On Thursday, August 4, the Street Crimes Unit (part of the Organized Crime and Narcotics Division) met the suspect at the Crowne Plaza Hotel located at 1960 Chain Bridge Road in Tysons Corner. The initial suspect was identified as Richard “Scott” Silverthorne, 50, of Fairfax. Silverthorne provided methamphetamine to the undercover detectives and was subsequently arrested and charged with felony distribution of methamphetamine and misdemeanor possession of drug paraphernalia.

While the news release makes it sound like the FCPD did not initially know that they were investigating the mayor, Captain Jack Harden confirmed during a press conference that they knew this from the outset:

So someone who was using a website specifically designed to facilitate voluntary exchanges with consenting adult males saw the mayor online, and then suddenly decided that this was unacceptable behavior that needed police intervention. Hopefully this person realizes that he fucked things up for everyone who used that website, including himself. Perhaps Silverthorne didn’t hook this snitch bitch hypocrite upstanding anonymous citizen up with any meth or ass, and that was the problem. Or maybe it was just good ole political sabotage from an opposing camp.

A brief Google search found photo ops with cops and several tweets that seem unfortunately-worded in light of recent events, but no overt “Blue Lives Matter” tributes or general copaganda coming from the soon-to-be-ex mayor. Did the mayor not provide a sufficient number of favors to law enforcement during his tenure, or was the opportunity for an awesome bust too great to pass up? Witnessing how FCPD and law enforcement in general handle their own internal scandals involving people killed by police hardly makes a convincing case that their swift actions regarding these victimless crimes were motivated by integrity and the interest of justice.

While it is fitting to see members of the political class get burned by the very laws they happily impose on others, there is absolutely nothing wrong with adults making decisions of their own free will about what they do with their own bodies, including using drugs or exchanging money, drugs, or favors for sex. In fact, attempts to regulate private behavior “for our own good” have led directly to many of the flagrant rights abuses we experience today.

The hypocrisy our society holds around meth use while insisting that even elementary school students require prescription stimulants that are almost identical to meth to perform well in school is also worth pointing out. Many people who use meth do so in order to keep up with the demands of their jobs— something that was probably a difficult task for a mayor who recently recovered from a battle with cancer. However, it’s not known whether Silverthorne used meth himself, not that it matters in terms of his charges.

At any rate, perhaps Silverthorne’s defense attorney can persuade a judge or jury that this behavior was motivated by sex and drug addiction, mental illnesses that deserve treatment, not prison.  After all, he has these previous words of support from Fairfax County Sheriff Stacey Kincaid (of Natasha McKenna fame): “And the Sheriff’s Office is working with the Fairfax City police chief and Mayor Silverthorne on the Diversion Program that diverts people to mental-health treatment, instead of jail, when possible.”

In the meantime, Silverthorne may find solace in Kincaid’s encouraging words during this difficult episode:”I’m proud to give my support to Scott because he’s a wonderful person and a fantastic friend,” said Kincaid. “And what happens to him personally doesn’t define who he is.”

Order Your D.A.R.E  to Mind Your Own Fucking Business Shirt by August 11!

613
SHARES
FacebookTwitterGoogleRedditTumblr
DiggLinkedinStumbleuponMailPrint
You Can Support Cop Block by shoppping on Amazon using the banner below:
BANNERS ARE CLICKABLE