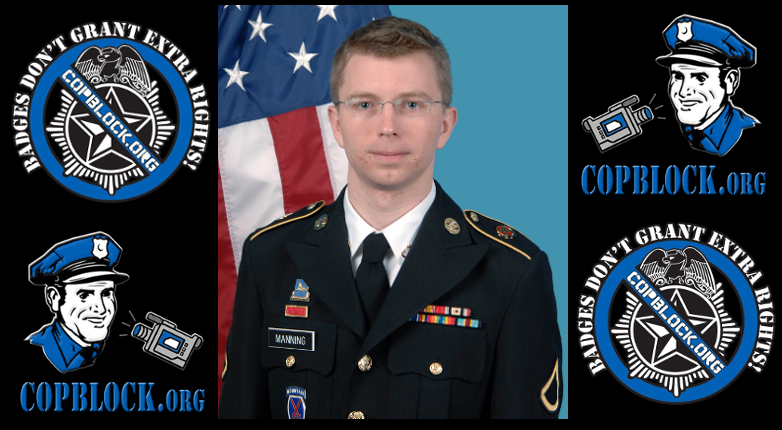 This post was written by Nick Ford and originally published at the Center For a Stateless Society (C4SS) under the title “Manning’s Death Wouldn’t be Enough for the State.” Posts and other content you think are worth sharing with the CopBlock Network can be sent in to us via the CopBlock.org Submission Page.

In the post below, Nick discusses the recent suicide attempt by Chelsea Manning, who was imprisoned for releasing video and other content related to war crimes by the United States in the Middle East, including the infamous “Collateral Murder” video showing the killing of children and other innocent civilians in Afghanistan.

It also discusses the Federal Government’s plan to further punish Manning for that suicide attempt, as well as actions the government has taken against other whistle-blowers that have exposed misconduct and outright crimes by the United States.

Manning’s Death Wouldn’t be Enough for the State

The ACLU reports that due to Chelsea Manning’s attempted suicide on July 5th in the Fort Leavenworth military prison she could face additional charges including “resisting the force cell move team;” “prohibited property;” and “conduct which threatens.”

The punishment could include, “indefinite solitary confinement, reclassification into maximum security, and an additional nine years in medium custody. They may negate any chances of parole.”

That last part is especially horrifying given the fact that Manning is already serving a 35 year sentence for releasing formerly classified material. Some of this material included the infamous Collateral Murder video released by Wikileaks back in 2010.

This video and other information that Manning helped become public have put the spotlight on a government that has all but assured us it isn’t operating within its own legal limits. Chelsea’s outright heroic actions brought to the forefront the reality that the government is made up of people and people with poor incentives can do horrific things.

That includes punishing whistle-blowers for exposing the truth behind a war that was based on lies, economic and political gain, and anti-foreign bias. A war that has cost the US billions in dollars and thousands of American lives, not to mention the thousands more lives lost who live in the countries the US has all but invaded.

This act of punishing Manning for her failed suicide attempt is just another cog in a brutal machine of torturing Manning for her perceived crimes. Just last year Manning was nearly thrown into solitary confinement for possession of LGBTQA+ reading material and (wait for it) toothpaste. There is no end to the control the state wants over Manning and people like her.

Because Manning symbolizes something that they want to crush: Rebellion.

And a government that is obsessed with control cannot allow Manning to live, or at least not in any real way. In this vein, perhaps the most damaging thing is that the military prison has consistently denied Manning, a trans woman, the necessary medical help so she can deal with dysphoria. This denial is in fact part and parcel of why Manning attempted to commit suicide in the first place among so many other factors none of us can even imagine.

Now the government is additionally trying to punish Manning for attempting to reclaim her life the only way she could think of.

Yes, suicide is a dark and tragic matter, but can any of us truly say we can’t understand why Manning wouldn’t feel like she’s better off that way? Would she really be so much happier living in a military prison for 30+ years where she is subject to all sorts of abuse, trauma and denied any way to medically transition to her desired gender?

This isn’t always (though it is sometimes) due to malicious intent but also the fact that many prisons simply aren’t equipped to deal with the issues. They either lack the institutional know-how or the financial know-how to help trans folks as they should.

But consider that The Intercept reports that in addition, “The punitive tactics that have been employed against her include stripping her naked in her cell on a nightly basis, extended solitary confinement and denial of medical necessities like eyeglasses.”

Recent Twitter updates from her profile have communicated that Manning seems to be doing better every day and hopefully she will overcome the darkness in her life and persevere. Her life matters, now more than ever and hopefully she knows that.

But can we really be shocked that like Aaron Swartz, the federal government may drive another whistle-blower to suicide?

As people who value a free society that Chelsea Manning fought so hard for, we can’t expect to reform the system at this point.

Snowden, Swartz, Assange and Manning have all been driven out of this country or out of their very existence for disobeying. It’s time to admit that we don’t live in a free society and that the system cannot be reformed.

The only thing to do is bury the state, bury it before it keeps torturing, controlling and killing.

So let’s bury the state and build something better while we dance on its ashes.