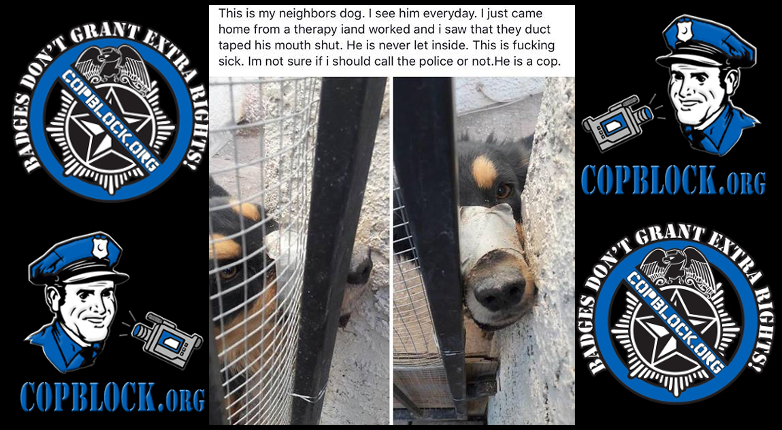 Last night, I received a call from another member of Nevada Cop Block, who had in turn received information from a local animal rights advocate about a dog that had been reported as being abused. The original report of that abuse came from a post on Facebook from a neighbor of the abuser.

Screenshots (included) showed that dog within a backyard with its mouth duct-taped shut. Those photos within the post pretty clearly show that the dog is being mistreated and likely being physically endangered by such treatment. However, things became a little complicated based on the identity of the abusive owner, who had used duct tape (presumably) to prevent the dog from barking.

I was informed at the time that that abusive owner was a Las Vegas cop. The neighbor who observed the abuse was reluctant to officially report that abuse out of fear that he would retaliate against them and the not unfounded concern that the fact they are a cop would facilitate any retaliation that might result.

While I very much appreciate and understand that fear, I personally feel that being public in such situations is actually the safest option, because then if there is retaliation of some sort it is much more obvious and easier to show. However, out of respect for others’ concerns I’ve removed the names and personal images from everyone involved in this story to ensure their anonymity. This includes people who stated they weren’t adverse to reporting the abuse publicly. They obviously are free to identify themselves of their own accord, but I’d rather not inadvertently expose the name of the person who made the original report.

Because of the reluctance of the person who initially reported the abuse to go public, it took until the next morning to establish the cop’s identity. He has since been exposed as Sgt. Brian C. Emil, an LVMPD corrections officer. Like most Las Vegas Metro police officers, Sgt. Emil makes a rather large salary (close to $200,000/yr., including benefits) so there’s obviously no reason for him to resort to abusive methods to (once again, presumably) keep his dog from barking. He surely could hire a trainer or even a dog sitter to prevent that if it is indeed his motivation for this inexcusable act toward an innocent animal.

Furthermore, the initial report included the statement that the dog is never let inside the house and that this wasn’t the first instance of abuse toward the dog that had been observed. Between the sadistic treatment evidenced by these photos and the apparent lack of time spent interacting with what is supposedly a pet, one would have to question why Sgt. Emil would even own a dog in the first place. Obviously, it’s not to protect his home, since it couldn’t even alert Emil or any other residents to the presence of intruders with its mouth taped closed.

There’s clearly no logical reason for this blatant, unnecessary, and cruel treatment of this dog and potentially any other pets this horrible person might own. In fact, he shouldn’t even have pets and this dog, as well as any other animals that show signs of abuse, should be liberated from his possession immediately, if not sooner.

Incidentally, animal cruelty is a felony in Clark County. However, as evidenced by the photos that were posted, the response to the initial report of this clear abuse was that “even if his mouth is taped shut if he has water it is ‘unfounded.'” Whether they were informed that he was a cop and were preparing to give him the typical Policeman’s Discount (i.e. sweep it under the rug) is unconfirmed at this point. (Animal control services in Southern Nevada don’t have the best track record.)

I was also told that the dog was not removed after animal control responded and was instead allowed to stay with Sgt. Emil, in spite of the obvious abuse. Additionally, although the person reporting the abuse was told he would be facing charges, a statement from the LVMPD stated that they “had not yet heard from the dog’s owner.” It’s very unlikely that either one of those two things would be the case if this was a regular citizen who had done this to an animal.

It shouldn’t be hard to recognize that this sort of treatment of an animal is abusive. In fact, it’s questionable how well he could drink water, even if it was available. Considering that Las Vegas just had a stretch of record high temperatures that exceeded 120 degrees several times less than a week earlier, this is a concern in-and-of itself.

The Las Vegas Metropolitan Police Department has a long and well known history of protecting their own and actively working to prevent Las Vegas area police officers from being held accountable for their actions. Therefore, a large part of the reason this is being posted here is to use the publicity it will generate to place pressure on local animal control officials and the LVMPD to do the right thing, both in regards to removing this poor animal from the abusive environment it is being kept, as well as holding Sgt. Emil accountable for his actions like anyone else would be if such a situation was witnessed.

I’ll be following up on this story until such actions are satisfactorily carried out. You can count on that.