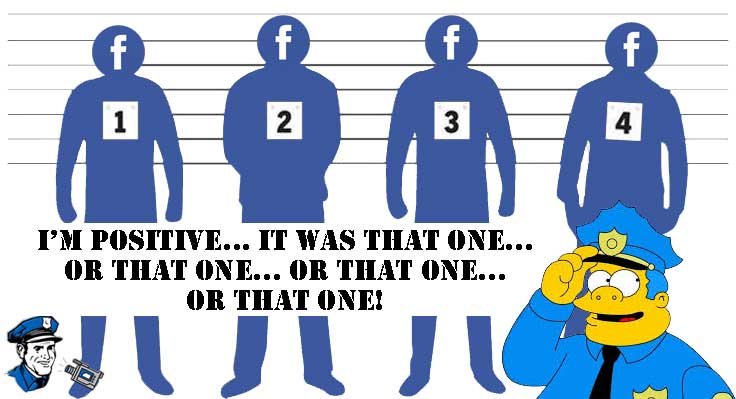 The following story was submitted to us via our Submit Page.

The following text is posted on Facebook under the victims profile.

“This is a warning about social media. It will be one of the longest posts I’ve ever written. It will probably be one of my last before closing my accounts.

A couple weeks ago, I started getting letters from lawyers soliciting me because of a supposed retail theft charge. I called one of the law offices and asked where they obtained this information. They said it was public record and came from Upper Hanover Township. I called the township and they directed me to the state police barracks in Skippack.

I called the state police barracks and spoke to an officer who assured me that I would know if I was being charged with a crime. She scoffed at me for getting worked up over these “marketing letters” from lawyers.

Thursday afternoon, I received a “Summons for Criminal Case,” indicating I was being charged with retail theft and demanding my appearance at a preliminary hearing.

Now here’s the real kicker. The affidavit of probable cause indicates that someone saw my picture on social media and decided I was the one who committed this crime.

I’m going to say this again because the sheer impact of this statement scares the crap out of me. “Probable cause” in this case is seeing my picture on Facebook. Please think long and hard about that as you toss around silly ideas like the US Constitution, Bill of Rights, Civil Rights, social justice, etc.

The following are the details in the affidavit for anyone who’s finding this story unbelievable:

Suzanne Rose Egan, loss prevention associate at Walmart in East Greenville, observed a white female filling a bag with retail merchandise and leaving the building without paying. Suzanne tried to stop her in the parking lot. The unidentified female dropped the bag and got in a truck.

Trooper Colin Allard of the Pennsylvania State Police was called. They ran the license plate of the truck. Then, they went on social media and found the owner of the truck. The owner of that truck happens to be one of my 331 Facebook friends. The affidavit states that I was seen in a photo that this person posted on his wall. I am not in any pictures or posts on his page. Not that it even matters, but from what I can tell, the only female in any of the photos he posted on his page is his significant other.

You would think at this point, I would’ve received a phone call or a visit from Trooper Allard. Well, I guess when you have Facebook, there’s no reason to actually speak to a suspect in a crime.

Trooper Allard filed the criminal complaint against me without ever contacting me or doing any “real” police work. Yes folks, your hard earned tax dollars are paying for Inspector Gadget to play around on Facebook.

In the affidavit, Trooper Allard says, “I respectfully request a fingerprint order be issued for the Defendant to report and be processed.” Interesting thing about the request is that my fingerprints are already on file with the state police from when I applied for my teaching certification. Apparently, he missed the training session on how to use a fingerprint database. That would require work on his part. I guess it’s just easier on his end to file a criminal complaint.

I called Trooper Allard to discuss the absurdness of this situation. Even though he’s never spoken to me or seen me in person (you know… IN REAL LIFE), he persistently accused me of being the thief at Walmart that day. When I insisted that I was not that person, he appeased me by calling her my “doppelganger.” How’s that for adding insult to injury?

I was told that if I want to file a complaint against Trooper Allard, I need to call Lieutenant Rodriguez in Skippack. Not surprisingly, that call has gone unanswered.

You may be wondering why I would put this out there like this. It’s embarrassing and upsetting. But, it’s public record now. It impacts my reputation in my work and my community. No one thought it was important to talk to me before charging me with a crime. I guess I just feel like I need to have a voice. I need to matter.

That was the end of the Facebook post from Beth Ann, but not the end of the story. I was able to speak with her for a short time about her ordeal. Her number one concern aside from her job and life, is others. She is not seeking retribution or even revenge on this cop that recklessly placed her name on court documents. She simply wants no one to have to go through this again. From a personal standpoint this woman seems kind and gentle. Not a trouble maker. Not a law-breaker. Facebook pictures even show a straight edge white suburban family. I didn’t even see a piercing or tattoo among them. So what went wrong?

I’ll tell you what went wrong. It was a rookie cop, 8 months on the job, looking to get ahead. Fresh out of full-time police brainwashing, also known as the police academy, this young officer sees crime everywhere…. even Facebook pictures suddenly become wanted persons (if you squint your eyes and tilt your head). We should get this guy on the terrorist watch list pictures. I’m sure a few drinks and an internet connection is all he needs to “find” all of the bad guys.

Well the fun does not end there. In an exclusive conversation with the victim I was also informed that the trooper had now

withdrawn the charges and would be calling to apologize. I did not believe it until I was given a screen shot of the message (pictured below).  Obviously they realized the mistake that had been made and were hoping to settle everyone without it getting out. Well it got out. Her post went viral and surprise surprise Beth never gets her apology.

I called the barracks myself and spoke with several “supervisors” who all said “no comment”. I waited for 15 minutes on hold for the chief of police and an unnamed person angrily picked up the phone and said “The chief has no comment!”

Once again we are met with a case of the “Blue wall of silence” covering for a bad cop. I ask all of you, where are all the good cops for Beth?