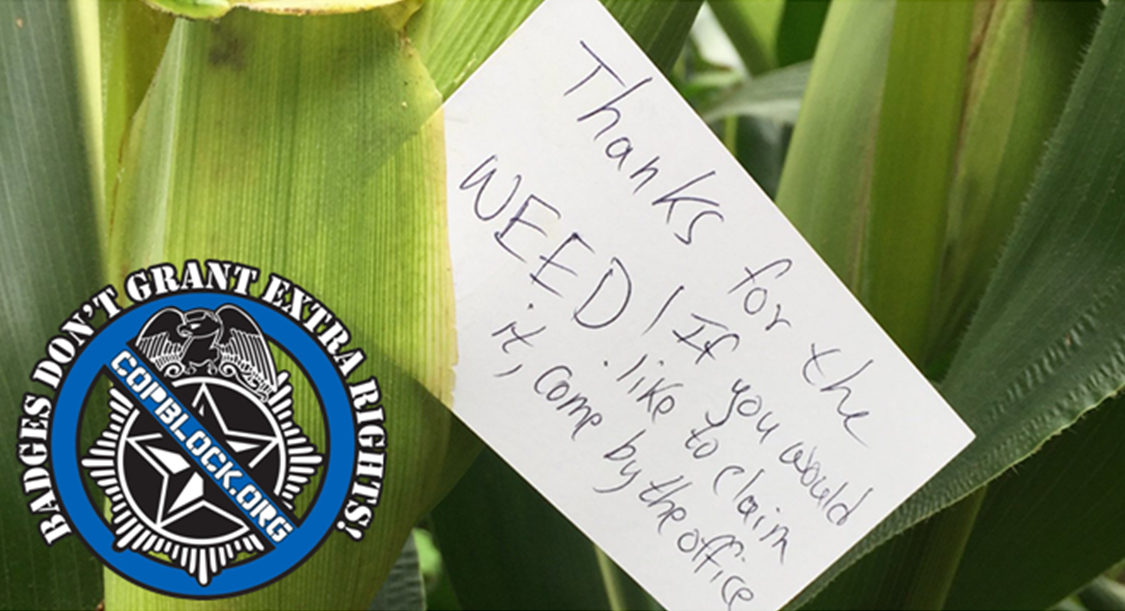 As Kentucky residents continue to organize in support of descheduling cannabis in the state, some officers are taking to social media platforms to taunt victims of the drug war.

After receiving an anonymous tip, Grayson County sheriff’s deputies found over 250 marijuana plants they said were worth over $600,000 in a corn field off Highway 54. The seizure occurred on July 29 but no one has yet been arrested.

As a result, the department took to their social media account on Facebook to say that if the growers call the department to claim the marijuana, they can have it back. The post used the hashtag, #WeGotYoWeed.

The post garnered a mixed reaction from locals. One commenter said that officers should be focused on “the real threat,” methamphetamine. A commenter from California pointed out that money garnered from marijuana cultivation is helping the economies of states where the plant is legal.

“We thank you for keeping the $$$$$ flowing west…..more dispensaries in LA then starbucks, we are laughing at you,” the commenter said. “I was raided 8 years ago and they left without touching a plant…..gave me advice and offered their assistance, said they see dozens of grows a day.”

What a pitiful waste of our tax dollars and law enforcement resources. You destroyed one of the most beneficial plants on the planet. It’s uses are many and it’s ills are none. Half of the Union has legal marijuana in some form. Hell, DC does!! 5 states have legal recreational marijuana and have seen tremendous social benefits from its legalization! Educate yourselves, then uphold your duty to serve your community. Removing a safe, natural medical alternative to deadly, addictive prescription pills is NOT serving anyone but the pharmaceutical industry and for-profit prisons. Be better than that. Be an officer who commands respect, not disdain from your community

It also appears that that upon confiscating the plants, Grayson County deputies left a note in the cornfield further taunting the growers reading, “Thanks for the weed. If you would like to claim it, come by the office.”

“You know this is just a drop in the bucket. We know there’s a lot more plants out there,” sheriff Norman Chaffins said. “People have mixed feelings about marijuana grows and whether marijuana should be legal or not. But it’s currently illegal in the state of Kentucky and we’ll continue to enforce those drug laws.”

Earlier this year, Kentucky Sen. Perry Clark brought forth a bill for medical marijuana to be legalized in the state called the Cannabis Freedom Act. The bill had no hearing however and did not get passed or rejected. Residents are currently attempting to see to that it is revisited in 2017.