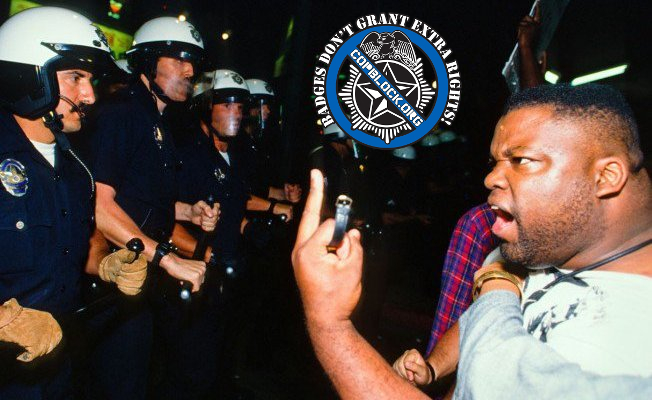 The following was submitted by Emile Dixon, who sees correlations in today’s violent police culture and the abuses they suffered in the 80s. That was long before everyone had a camera in their cell phone and were able to provide objective records of their abuse. Just after work, Emile was was walking home when a group of police officers thought he had a gun and began to harass him. Their actions led to Emile being charged with a felony and being thrown in a cage.

If you have a story or video of police harassment, please share it with us using the submit tab or by joining the CopBlock Network.

In the Spring of 1983, I was working as a painter in the Tenderloin of San Francisco, a not-so-nice area of downtown. I lived by Golden Gate Park, but I stopped for a glass of wine at a friend’s bar up on Bush St. before heading home. I had taken the time to change my clothes after work, so I was in fairly nondescript, everyday attire…

As I walked downhill toward the street where I could catch the bus home, a woman said:”Hey, that cop is calling you…”

I turned and looked back and was motioned over to where two or three officers were standing in a cluster. As I arrived, one of them stepped forward and asked, “You carrying a gun?” as he grabbed my jacket and began rifling through my pockets. As is normal in reaction to someone sticking their hands where they don’t belong, I pulled back and said “Hey, wait one Goddamn…!”

The next thing I know, I’ve got my jacket over my arms, I’m being kicked and punched. There were four of them and then five. By the time I gathered my faculties, they had me up and over the hood of their car, handcuffed. All I can remember saying was “Why the hell did you guys do this shit to me?” I wasn’t bothering anyone! I just got off of work…”

I was taken to 850 Bryant to be booked for “Battery of a P.O., with injuries” (It seems one of the boys in blue was on the football team and had sprained his throwing hand, hitting me in the head), but the desk sergeant on duty refused to take me until they escorted me to the emergency room for sizing up.

After the cursory exam and release back into the waiting arms of the guys who had caused the injuries (multiple contusions, loose teeth, broken ribs, etc) I was formally charged and thrown into the felony tank to await arraignment. This happened on a Friday evening, so there I sat for the better part of three(3) days, not making friends and influencing no one.

As my name was called in court, in walked this fresh-faced public defender who uttered a few words and in the “interest of justice” my ‘case’ was dismissed and I was told I was “free to go.” No apology, no bus fare, no dry cleaners’ repayment…I recuperated for a week or so and then after not sleeping for almost that entire period of time, went down to a lawyer’s office and filed a case against the city, the officers, and anybody else we could think of for assault and battery, false imprisonment, etc.

The attorney was pretty sure we were going to be wealthy men when all was said and done. A few days later, I happened to be in a little Bodega at the register and this girl looked at me with a wide eyes and asks: “Are you alright? I said “Sure, I cut myself shaving. She laughed and reminded me: “I was the one who told you the cop was calling you!” I was almost giddy with anticipation when I realized we had the coup de gras in her testimony. “Would you be willing give a deposition? My lawyer is gonna want to kiss you!” She answered, “Sure. I was really sorry to watch what they did to you…” I got her info and called it in to the lawyer’s office.

A few weeks later, I got a call from my attorney. He said, “Your witness has flown the coop. It happened within days of my filing the suit; I’m not saying it necessarily means they got to her, but she was very cooperative. Then all of a sudden, without so much as an ‘I changed my mind!’ she’s disappeared. No forwarding address, nobody where she lives has a clue. For all we know, she could be dead…I’m sorry. Without her,testimony, we’ve basically got no case. You can still file the wrongful arrest papers, but it’s only going to cost you money”

I left my heart in San Francisco about a month later…

While the injustice that had befallen Emile happened over 30 years ago. It’s evidence of the long standing injustices suffered as a result of the police state and the individuals who violently uphold the laws that make its existence possible.