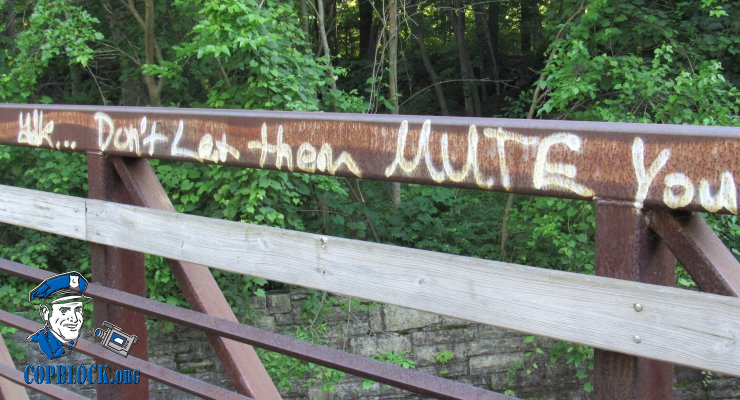 The tragic slaying of 25 year old Jay Anderson, if nothing else, highlights Wauwatosa PD’s lack of transparency. It’s been over a month and still, the killer remains unidentified, no press conference held, and footage is elusive. Interestingly, devices which could’ve helped reveal what happened that night were denounced by Tosa’s police chief in 2014. The letter in which he made his case–addressed to the public– was ironically withheld until open records requested two years later.

Wauwatosa PD has continued its “loose lips sinks ships” approach to its most recent shooting. At around 3am on June 23d, an unidentified Wauwatosa officer approached a car deemed suspicious. WPD claims the officer, at some point, saw a gun, feared for their safety, and fired. It took days for Tosa PD to disclose the victim’s name– 25 year old Jay Anderson, fiancé and father.

After a press conference wasn’t held, Anderson’s family united with activists to peacefully protest in Wauwatosa’s streets. Despite local outlets framing the marches as an annoyance and disruption, they’re putting pressure on officials. Responsibility for investigating the killing, instead of going to the Department Of Justice, has been kicked to Milwaukee PD.

Anderson’s parents were eventually invited to the Milwaukee district attorney’s office to view just 20 seconds of footage. That clip showed their son die, but not what occurred before or after the trigger was pulled. Now, they demand to see it all and continue marching for disclosure. Interestingly, although footage does exist, the DA office claimed dash cam footage doesn’t. Despite this, WPD Chief Barry Weber said he believed dash footage did exist.

It’s also possible the clip was instead captured via a personal body cam. Wauwatosa Chief Barry Weber expressed his feelings toward body cams in the 2014 annual report. Such reports always include a letter addressed to the mayor, common council, and citizens of Tosa. Weber’s 2014 letter can be found on page 6 of that years annual report, located on Tosa’s city page.

Ironically, it was withheld from the public along with three full years of reports.  WPD ceased publication after 2011, taking down those that remained in 2015. Tosa PD was forced to disclose them, including the previously unreleased years, after Cop Block FOIA requests.

One thing that immediately sticks out about Chief Weber’s 2014 letter is its defensive tone. “Across the country”, he writes, “when an officer is involved in a deadly force incident, many people are quick to engage in finger pointing and blaming for what has happened.” Weber affirms his belief that “rather than address the problems with our society, the police forces are expected to change.” Weber called body cameras “the trending demand”, appearing skeptical of their effectiveness. “Body cameras do not solve the problems that everyone believes they will”, writes Weber.

“Effective policing requires patience, thought, and careful considerations before decisions are made that could adversely affect our relationships with our citizens.” Weber also used WPD’s responsibility to make good use of taxpayer dollars as further reason to shy from body cameras. “We will make decisions based on data, prevailing law, cost and whether we believe this to be a worthwhile tool.” Weber said WPD would avoid a “knee-jerk reaction to this latest demand”, utilizing a “cautious and informed approach.”

In reality, body cams have been tested and shown to help prevent unnecessary escalations of police force. The University of Cambridge’s criminology institute published the first “full scientific study” on body cams in 2012. During the year long study–conducted on the Rialto California PD–researchers found use-of-force dropped by 59% when officers used body cams.

Additionally, reports against officers by citizens dropped by 87% when compared to the prior year. While optimistic, the team urged more research be done before the cameras are issued nationwide. Others point out highly publicized police killings–like the Eric Garner case–where an NYPD officer was videotaped choking him to death yet no charges were filed.

Dr. Barak Ariel, who helped conduct the study, feels “institutionalized” body cam use could “oblige” officers to “issue a warning from the start.” Such commands impact “the psyche of all involved by conveying a straightforward, pragmatic message: we are all being watched, videotaped and expected to follow the rules.” Ariel feels “police subcultures of “illegitimate force responses” are endangered by body cams, “because misconduct cannot go undetected.”

“Police-public encounters become more transparent and the curtain of silence that protects misconduct can more easily be unveiled, which makes misconduct less likely.” In the Rialto PD, police use of force was 2.5 times higher before the cameras were introduced, according to the Cambridge study. Ariel and colleagues are currently replicating the experiment with over 30 forces worldwide, including in Europe.

Their study on Rialto PD showed body cams are also cost effective. According to the study, departments save four dollars spent on complaints for every one spent on cameras. However, data storage may eventually prove difficult without the development of more efficient technologies and protocols. Overall, Ariel feels body cam’s can potentially “improve police legitimacy and enhance democracy.” While this is true, “there are substantial effects” of body cams “that can potentially offset the benefits which future research needs to explore.”

That’s certainly true, more research needs to be done before body cams see full standardization. They’re also not a silver bullet, and more comprehensive police reforms are required. In light of this, body cam’s do possess traits helpful in establishing better community relationships. While generally discouraging unnecessary force in all officers, they offer transparency when lines are crossed.

That kind of transparency is absent in the Jay Anderson Wauwatosa killing, and other Tosa operations. Whereas some residents seemingly adore WPD, consistent misconduct accounts surface year after year. Those thoughts and feelings bubble to the surface occasionally, and have been the subject of WPD opposition.

One of the best examples occurred after former Wauwatosa East High School student Dan Moore drew a comic for the school paper. The comic showed a Tosa officer pulling over a black driver saying “you realize you’re black driving in Wauwatosa, right?” WPD Chief Barry Weber took time out of his day to say such commentary causes problems “when, in fact, there are none.”

Moore’s commentary, however, was echoed by Wauwatosa Now writer Jon Olson. Olson, interviewed in 2013 for the documentary Speak Friend And Enter, attested to Tosa’s racial profiling reputation. “I have African American friends”, he said, “who’ll really try to avoid driving through Wauwatosa because they’re stopped for no reason.” Whereas Moore’s comic garnered a very public reaction from WPD, a press conference was skipped for Jay Anderson. Conversely, a Tosa shooting involving a man brandishing a sword at officers last year got a press conference and Chief Weber’s appearance.

Two people saying the exact same thing years apart and, unlike Weber’s assertion, they’re backed by data. According to the Post Crescent, an arrest analysis found Wisconsin police exceed Ferguson’s 3-1 black-white arrest ratio. Give you one guess who scored at the top of the study–conducted by University of Wisconsin Madison researchers– Tosa PD.

In Wauwatosa, blacks accounted for 60% of arrests between 2011 and 2012 even though they’re just 4% of the population. African Americans, the Post Crescent reports, are 30 times more likely to be arrested by Weber’s force than whites, 90% of the population. Reports of racial malpractice have gone relatively unchanged in Tosa since the 80’s. Margo; a teen interviewed for Speak Friend And Enter, said “I’ve heard of kids being picked out of groups that are of a different race, and being questioned aside from their other friends.”

But Tosa as a city, not just the police, continues to claim there’s nothing to be seen here. No mention of the killing, or even the protests, has been made by WPD on its facebook page . Instead, Tosa PD posts updates on P.R. events, and “thank you for your service” cookie donations. Their most recent review mentioned the protests, stating officers were professional and mall goers safer with them there. The review states that mall goers were annoyed with protesters, rather than afraid.

Jay Anderson’s killing highlights, along with WPD’s actions, how apathetic Tosa is towards such issues.  A large segment of the population seems detached from issues of race and police misconduct, likely because they themselves don’t experience it. That apathy and detachment  manifests in every day social interactions, from school, to your friend’s house, to police encounters.

The theme arose in Speak Friend And Enter, when two boy’s debated WPD’s illegal searches of teens. While one stated “if you’re not doing anything wrong then what’s the big deal”, another blasted him. “Take it farther than ‘if it doesn’t affect me I don’t care’, because some day it will affect you. So stop being ignorant and stop standing idly by while a lot of people have to deal with these problems. And it will be you some day.” The exchange prophetically embodied both this detachment, and a divide Anderson’s killing has wrought. While some disagree with WPD’s handling of the slaying, others fiercely defend them with zealous enthusiasm.

Though what’s happening in Tosa may be complicated, it is in fact happening. It manifests on a daily basis, regardless of whether residents are conscious of it. Solutions come only once the problem is acknowledged, and all parties take responsibility. That’s impossible when heads are stuck in the dirt, and issues dismissed.

Tosa PD Chief Barry Weber contributes to this by repeatedly pushing back against residents who bring up these issues. Whether that’s dismissing a high school newspaper comic, scoffing at body cams in an undisclosed letter, or not providing racial break ups in WPD’s public reports. Though tragic, Jay Anderson’s death threw open the door for all of Tosa’s skeletons to fall out. Whatever becomes of the investigation, at least people are being granted the dignity of knowing what happens here. Perhaps the bit of graffiti attached to this article sums it up best, appearing in Hart Park shortly after Speak Friend And Enter was released. It reads clear: “Don’t Let Them Mute You”.