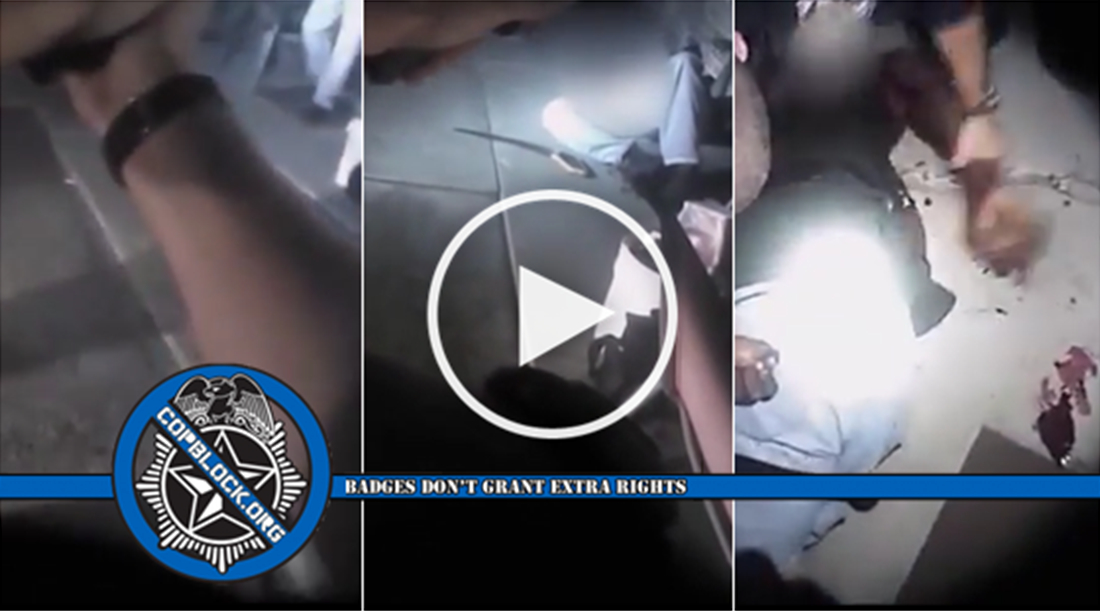 Body-cam video and multiple witness statements are shinning a light on a fatal police shooting that occurred early Monday morning in Louisville, Kentucky.

In the aftermath of the killing, Louisville Metro officers said 57-year-old Darnell Wicker wouldn’t drop a knife and a saw – and approached them menacingly after they responded to a domestic call at the Broadleaf Arms Apartments.

In body-cam video recorded from the scene, one cop can be heard stating, “He came outside – he came out the door and was holding a knife in his hand, he started kind of swinging it around a little bit and he kind of came at us and so we shot.”

The footage appears to show no such thing however. Instead, officers Taylor Banks and Beau Gadegaard are seen opening fire on Wicker immediately after confronting him.

“Drop the knife, drop it!” officers are heard yelling a spilt second before raining down gunfire on the man. They then shout, “Don’t move!” as Wicker lie riddled with bullet holes bleeding on the ground.

The footage does not properly encapsulate what occurred prior to the shots as the body-camera was positioned in manner disabling a clear view of Wicker – but what can be discerned appears to show Wicker not making any sudden or threatening motions.

Instead, seen from the waist down, Wicker seems to tacitly take one step in the officers’ direction. Something that could have provided a better perspective of what occurred is footage from officer Gadegaard’s body-camera.

He is heard saying in the video however, that his body-cam was not turned on. Following the shooting, the cops handcuff Wicker’s lifeless body and allow him to lie on the pavement without attempting to give him any medical aid as they bust into the door of an apartment in order to “clear” it.

According to the Jefferson County Coroner’s office, Wicker died from multiple gunshot wounds to his torso, upper right extremity and lower extremities. It is unclear exactly how many times he was shot.

Adding suspicion to the police’s “he was coming right at me” narrative, are witness statements from the scene that dispute the officers’ version of events that Wicker was a threat to their safety.

“They just ran up past him, around him, and just said, ‘Drop your weapon!’ Pow! Pow! Pow! Pow!” Wicker’s girlfriend, Anita Jones said. “He had no chance to drop the weapon.”

The woman’s daughter, who had originally made the call to police, Denita Jones, relayed the same testimony stating, “I was far enough over here that he ran beside me, pushed her out of the way, said, ‘Ma’am move!’ ran up, the other one went that way. ‘Put it down!’ Pop! Pop! Pop!”

The women’s statements appear to be corroborated by the body-cam footage and the two raised additional questions about why the officers did not attempt to administer first aid to Wicker. In extended footage released by the Louisville Metro police department, one officer was heard saying that there was nothing that could be done for the man.

EMTs did not arrive on the scene until nine minutes after the shooting – and police chief Steve Conrad said that he has questions of his own about how the incident was handled. He said that the Louisville Metro police Public Integrity Unit is now investigating the incident.

“It is only through that thorough investigation that we will be able to understand and fully determine whether or not these officers provided the appropriate level of aid,” according to Conrad.