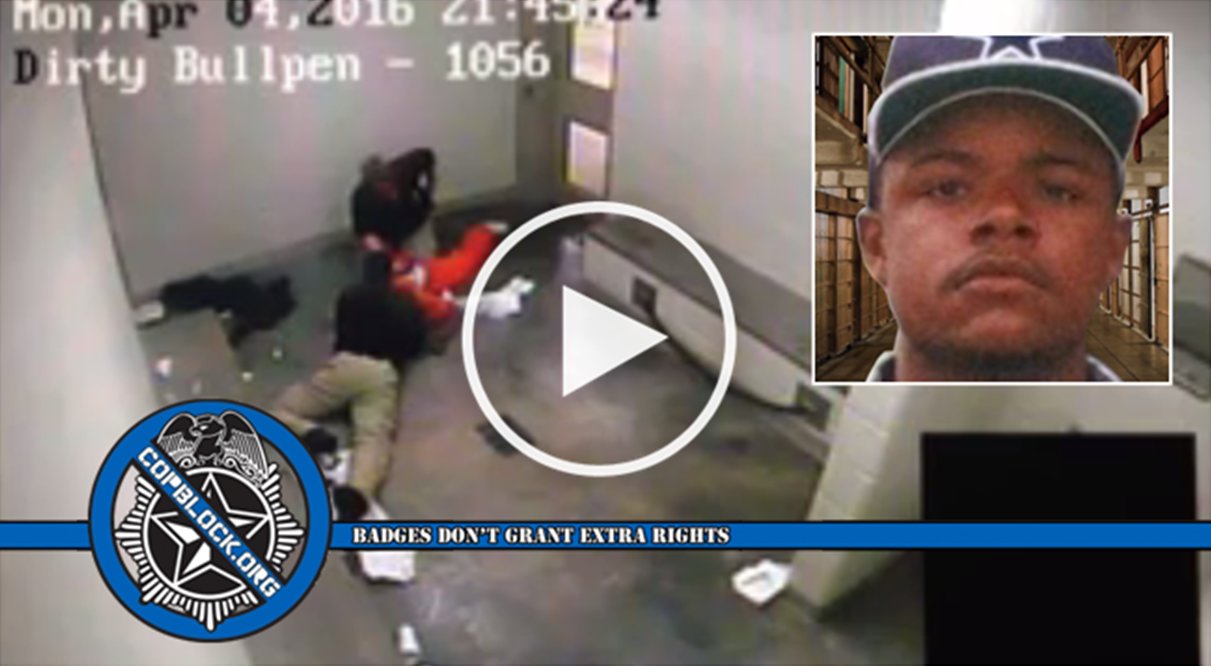 An Oklahoma corrections officer will face no charges despite video showing him choke an inmate for more than a minute until he died at the Caddo County Detention Center.

Darius Robinson, 41, was arrested on April 1 on a 2008 warrant for failing to pay child support. On April 4, the father of seven experienced what a family attorney has called a “manic episode” while inside of his jail cell.

According to Caddo County Undersheriff Spencer Davis, Robinson began acting erratically and had threatened a cellmate, prompting his removal to an isolated cell of his own. He then started eating ants off the floor and pages from a Bible.

When jailers entered the cell in an attempt to calm Robinson, Davis said he charged them. As a result, Robinson was pepper sprayed and held down on the ground with what would ultimately become a fatal chokehold.

A surveillance camera from inside the cell caught what occurred. The footage, which was released to Robinson family attorneys last month, shows him waving around a blanket, tearing up pieces of paper, and squirming around on the floor.

Civilian Corrections Officer Michael Allen Smith is seen entering Robinson’s cell with officer Vicki Lyn Richardson and they begin cleaning up Robinson’s mess while he takes a seat on a bench.

The footage shows Robinson lean toward Smith, who is standing in front of him, and the officer responds by wrapping his forearm under his neck. Richardson then pepper sprays Robinson and Smith takes him to the floor.

Once on the ground, Smith grips Robinson’s neck with both hands and handcuffs him before a third officer enters the cell and puts his foot on Robinson’s back. Having choked Robinson for more than a minute, Smith finally lets go, but the damage is done.

An autopsy found that Robinson’s windpipe had been crushed, the hyoid bone supporting his tongue had been fractured, and the surrounding muscles had been hemorrhaging blood. A state medical examiner ruled the cause of death a homicide that resulted from “manual compression of the neck.”

Following the incident, Caddo County district attorney Jason Hicks did not bring any charges against Smith – and Undersheriff Davis said Smith and Richardson had been placed on paid administrative leave pending a grand jury decision about whether or not to indict them.

On Monday, Hicks revealed that the grand jury returned no indictments against the two jailers but recommended ways to improve safety at the jail that included an annual review, examining proper restraint training, and improving outdated policies.

Robinson family attorneys have said Robinson would be alive if not for the “outrageous excessive force” of jail officials, and that “he was killed by the justice system in Caddo County.” After news of Monday’s decision, they said a lawsuit against the county and jailers is imminent.