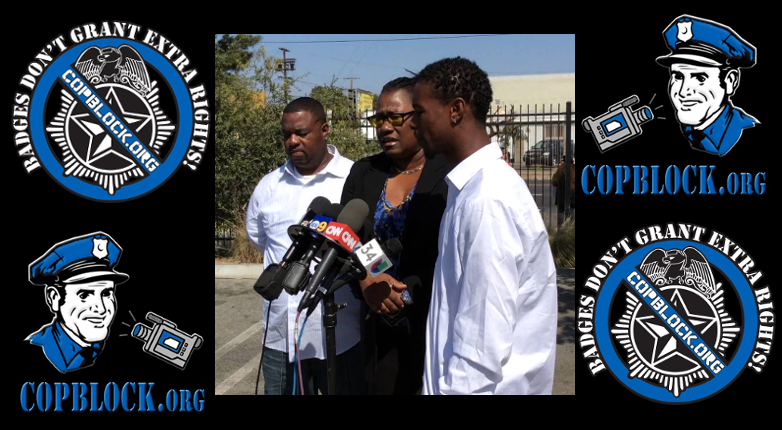 Video of an October 2014 beating by LAPD Officer Richard Garcia was so bad that a Los Angeles police official described it as “horrific.” The leadership at the Los Angeles Police Department and a civilian review board both agreed that it violated policy. Even the District Attorney Jackie Lacey seemingly was taking the incident seriously by filing felony assault charges against Garcia for his attack during the arrest of Clinton Alford Jr.

Then they all suddenly realized Garcia was just a Bad Apple and that they all were Heroes and he was given a plea deal that will allow him to completely avoid jail time and have the charges downgraded to a misdemeanor if he performs 300 hours of community service and pays a $500 fine by May of 2017. For some odd reason this plea deal was also never publicly announced, but Lacey is pretty sure it will send a message to other cops and Los Angeles residents.

(I tend to agree, except the message is “your Policeman’s Discount code is always valid here no matter how “horrific” or well documented your crime is.”)

“I understand how in looking at the final result, someone may think that it wasn’t a just sentence,” she (D.A. Jackie Lacey) said. “But they simply don’t have all the information that we did when we made the final decision.”

Lacey said that she believed filing the felony charge against Garcia signaled to both police officers and residents that “people will be held accountable.”

“I do think it sends a strong message to any law enforcement officer who is thinking about violating the law,” she said. “If you talk to any officer about a felony on their record gotten in the course of their job, I don’t think anyone would see this as light at all.”

But others disagreed. Mac Shorty, the chair of the Watts Neighborhood Council, said the outcome was too lenient and another example of Lacey not holding police officers accountable during a time of increased scrutiny of how officers use force, particularly against African Americans.

“That’s not justice,” he said. “If I do something wrong, I face prison time. It’s not fair to the community that anybody coming into the community mistreats someone and gets a slap on the wrist.”

Caree Harper, an attorney representing Alford in a federal lawsuit he filed against the city, said that for nearly two years, her client and his family “have believed that Mr. Garcia would receive nothing more than a slap on the wrist and be back on the beat in no time…”

In an earlier interview with The Times, Alford said he was riding his bicycle along Avalon Boulevard when a car pulled up and a man yelled at him to stop. Someone grabbed the back of his bike, he said, so he jumped off and ran.

Authorities later said police were investigating a robbery and that Alford matched the description of their suspect.

After a short chase, two police officers caught up to Alford. The video showed him getting on the ground and putting his hands behind his back, according to several police officials who saw the footage.

Seconds later, the sources said, a patrol car pulled up and a uniformed officer bailed out of the car, rushing toward Alford.

Garcia kicked, elbowed, punched and slapped Alford, according to a report from Los Angeles police Chief Charlie Beck made public last fall. The officer’s actions, the chief said in the report, were not reasonable “given Alford’s limited and unapparent resistance.”

“I was just praying to God that they wouldn’t kill me,” Alford told reporters. “I felt that I was going to die.”

…Lacey has faced criticism over her handling of other cases involving law enforcement officers, including her decision not to charge a California Highway Patrol officer who punched a woman along the 10 Freeway — another encounter caught on video.

Activists have also questioned why prosecutors have not yet said whether they will charge the LAPD officers who fatally shot Ezell Ford, a mentally ill black man, as he walked near his South L.A. home. Thursday marks the two-year anniversary of Ford’s death.

“She has hurt the community more than she’s helped us by not holding these people accountable,” Shorty, the Watts resident, said.