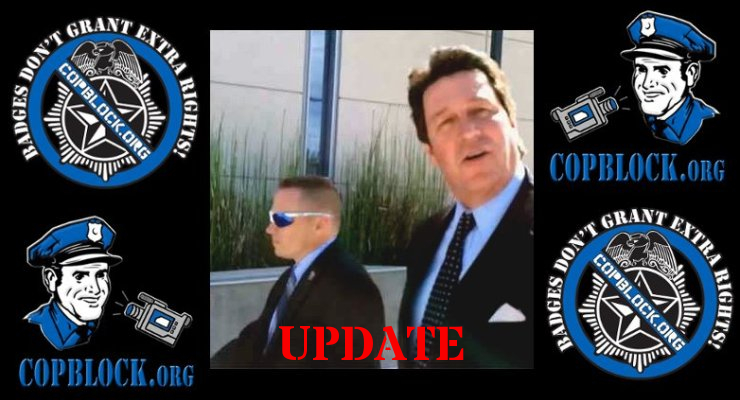 Officer James Lescinsky, who I reported on in June, has begun his trial for assault against a student and a member of the school staff after a fight between two students in the lunch room in May of 2015. He’s also been accused of falsifying his reports to cover up the assaults.

Earlier this week, the federal prosecutors rested their case against the Clark County School District police officer. Witnesses testified that Lescinsky used excess force against the student to break up the fight and then broke the hand of a female staff member with his baton after she tried to intercede on behalf of the student. That testimony added some interesting details to the previous descriptions of the incident.

Earlier Tuesday, school staffers testified that they saw Lescinsky come into the lunchroom about noon on May 21, 2015, with his baton in the air looking to break up a disturbance.

Monique Hawkins-Wells, an office assistant, said she screamed when she saw Lescinsky swinging the baton, as she was trying to usher students out of the cafeteria.

She testified that she saw the officer push the teenage girl out the cafeteria face first into a concrete wall in the hallway.

Another staffer, food service supervisor Gloria Henyard-Hall, testified that Lescinsky looked “a little bit crazy-like” after he stumbled while entering the lunchroom.

On Monday, the school maintenance worker, Tarika Rushing, told Dorsey from the witness stand that Lescinsky without warning struck her left hand with the baton as she was trying to calm the student, who had been pulled away from a lunchroom fight with another girl. Rushing said the baton broke one of her fingers.

Federal prosecutors contend that Lescinsky’s actions were inconsistent with his training and that he knew what he was doing was wrong.

(Defense lawyer Jack) Campbell maintained that Rushing and the girl were in a heated altercation and that three separate police supervisors later found Lescinsky’s conduct “reasonable” under department policy.

It shouldn’t exactly be shocking that police supervisors found Officer Lescinsky’s behavior “reasonable” since police supervisors routinely find anything, up to and including videotaped murder, “reasonable.” That’s especially true in Las Vegas area police departments, where District Attorney Steve Wolfson once justified the kicking of a motorist suffering from diabetic shock in the head because the Henderson police train them to do that in the academy. Even more specifically, the CCSD police supervisors recently determined that when a group of school police got a bunch of teens drunk then allowed one of them to drive home, resulting in a fatal DUI accident, and covered it up afterwards, it was  “within the scope of their duties.”

According to his lawyer, Officer Lescinsky won’t be testifying on his own behalf, but he already has a stacked deck in his favor. Lescinsky “waived” his right to a jury trial and instead will have his case decided by U.S. District Judge Jennifer Dorsey. I wonder how long it will take for her to announce her decision that her co-worker’s conduct was “reasonable.”
160
SHARES
FacebookTwitterGoogleRedditTumblr
DiggLinkedinStumbleuponMailPrint