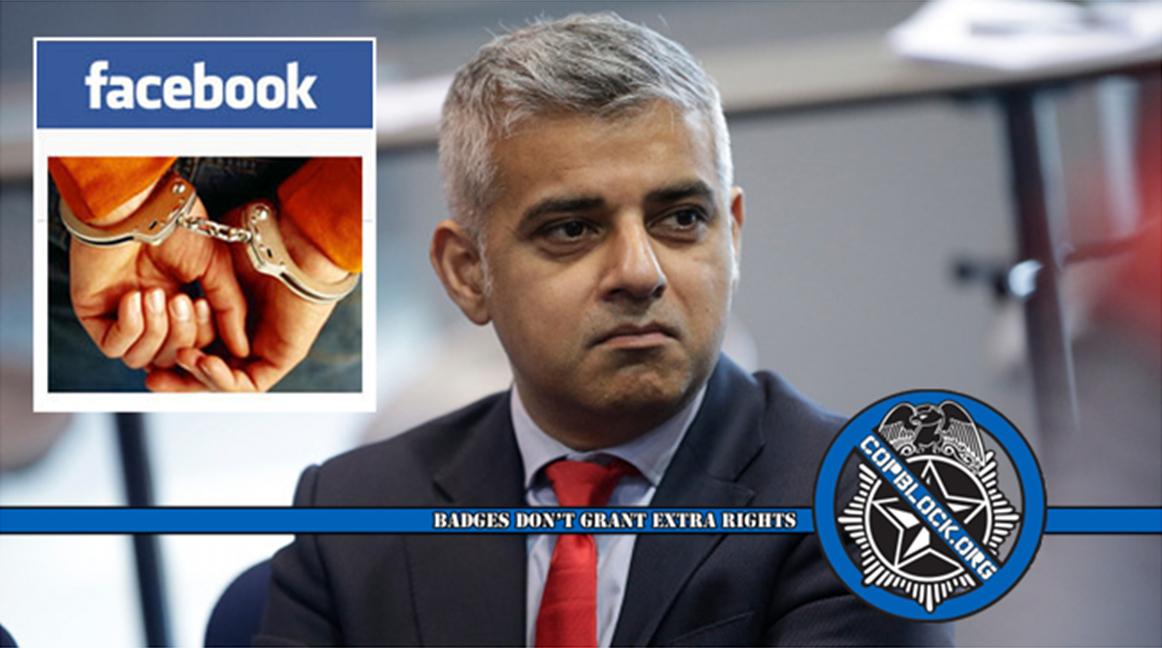 In yet another confirmation that political correctness means a draconian police state, police in London have set up a “trolling hunting” unit geared toward targeting offensive online commenters.

According to the London Mayor’s Office, headed by the city’s first Muslim Mayor, Sadiq Khan, the “online hate crime hub” will be partially funded by the Home Office, which will contribute £450,000 ($581,000) to the £1.7-million ($2.2-million) project over the next two years.

Citing the “increasing role [of] online hate” disguised under a “veil of anonymity” on social media, the Mayor’s Office for Policing And Crime said the unit will consist of five trained detectives, aided by volunteers who will be urged to report both “criminal and non-criminal incidents.”

The move comes on the heels of Britain’s referendum vote to leave the European Union during which mainstream media outlets claimed there was a large spike in reported hate crimes compared to the same time last year, mostly targeting migrants and refugees.

Assistant Chief Constable Mark Hamilton, of the National Police Chiefs’ Council Lead for Hate Crime would say however, that there was no evidence to suggest any spike in hate crime reports was uniquely related to the Brexit vote and that similar trends often occur after important national or international events.

Additionally, it was revealed that social-justice warriors and pro-EU internationalists were congregating online in order to comb through social media posts for supposed hate speech to report. It also came to light that some of the incidents reported as hate crimes were people merely calling the police to complain about UK Independence Party leader and Brexit champion Nigel Farage.

None the less, the Orwellian thought police unit is moving forward in London with civil-liberty and free speech advocates saying that the new unit will cause a chilling effect online designed to prevent legitimate conversation about concerns many have regarding the fundamental transformation and demographic displacement of the city and the rest of Europe.

“Online bullying is an increasingly serious problem but police should not be proactively seeking cases like these and turning themselves into chatroom moderators,” Liberal Democrat leader Tim Farron said. “With such measures, even if well-intentioned, there is a real danger of undermining our very precious freedom of speech.”

Interestingly, so-called advocates of working people on the left have allied themselves with powerful financial interests and globalist politicians like Mayor Khan in order to promote an agenda that outsources jobs, imports foreign cultures that are hostile to liberal European freedoms and values, and undermines the domestic labor pool.

Khan, who just competed his first 100 days as Mayor, was elected by a population whose make-up was just 45 percent ethnically British, according to a 2011 census. Native British born-residents are quickly becoming a minority in London, exacerbated by the current European migrant crisis.

Khan has been criticized for his alleged ties to Islamic extremism. One of his first measures in office was a move to ban advertisements in the London Transit using scantily clad women that he said “body-shamed” the general public with unrealistic expectations. Public depictions of women are banned outright in most of the Muslim world. In other words, it isn’t a surprise that Khan would wish to set up a police unit to target online critics of Islamic immigration.

“By establishing this unit, we are sending a strong message to those who use online forums to spread hate that their actions will not be tolerated,” The London Metropolitan police said in a statement. “The Metropolitan police service continues to have a zero-tolerance approach to all forms of hate crime.”

Elsewhere in Europe, things are even worse. In Sweden for example, where it is estimated that 77 percent of rapes are committed by the 2 percent male Muslim population, online anti-immigration speech is criminal. Dutch police have made numerous visits to people making anti-mass migration comments on social media, even telling one man, “Your tweets may seem seditious.”

Last December, the Merkel regime in Germany teamed up with Facebook, Twitter and Google in order to delete offensive posts deemed “hate speech” within 24 hours in what was seen as a move to squash public dissent about the arrival of over a million refuges and immigrants. This came after a former Stasi agent was recruited by the government to patrol Facebook for “xenophobic” comments. Police in the country have even raided numerous homes of people for posting “anti-migrant” views online.

Likewise in Denmark, police are being used to enforce political correctness. There, a veteran politician was arrested and fined for simply tweeting about the European migrant crisis. There have also been similar arrests in places like Scotland. If you can’t tell, there is a consorted effort to censor and crush any opponent of the Islamization of Europe. Mass-migration has long been a tried and true imperial tactic of subverting a domestic population to the will and control of foreign powers.

By undermining the ethnic makeup of a society, the identity and traditions of that society become lost, making people more malleable to the will of the state. This is something Stalin understood when he flooded the Soviet satellite states with ethnic Russians. The demographic displacement of the west is not being done so that we can all experience the wonders of diversity. It is being done to destroy the traditions of individual liberty and genuine classical liberalism that serve as a bulwark to those that wish to control us.

If you are willing to stand with the big corporations that want access to cheaper labor, politicians like Angela Merkel who wish to stay in power by continuing to import voters that increase the size and power of government, and the police state apparatus being used to silence dissent and arrest people simply for expressing their opinions – then perhaps it’s time that you reconsider whether or not you are on the right side of immigration issue.