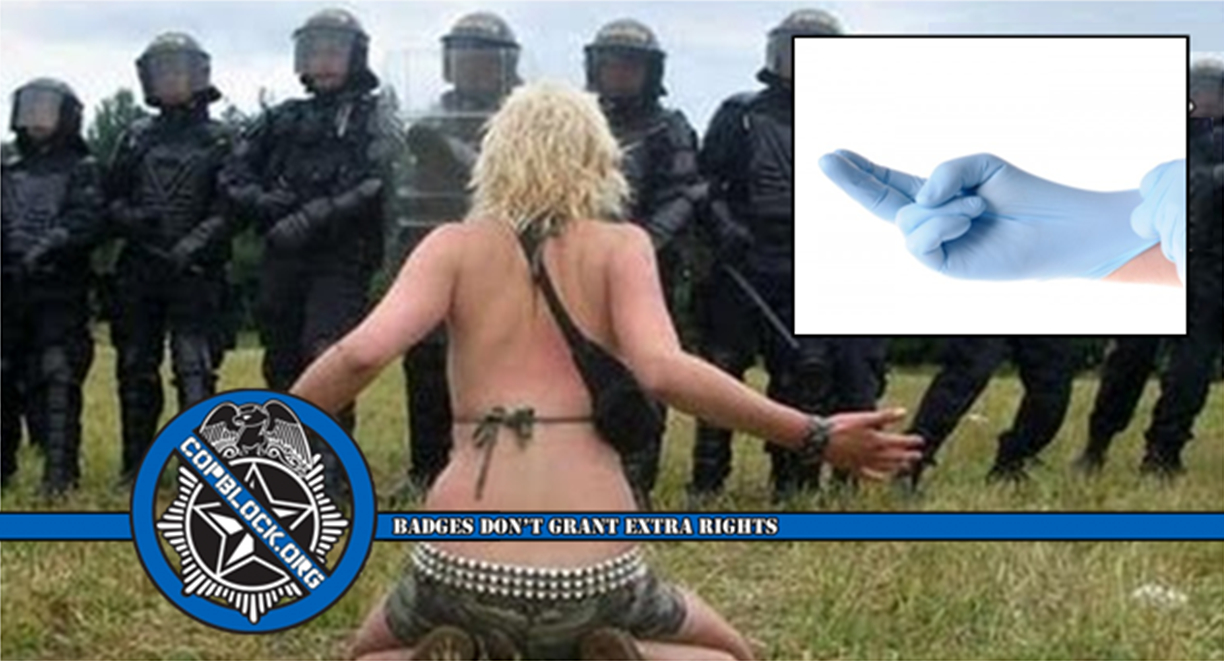 The findings of a Department of Justice probe into the Baltimore police department has reveled “many instances in which BPD officers strip-searched individuals without justification – often in public areas – subjecting them to humiliation and violating the constitution.”

When officers told her to stand her on the side of the road and remove her clothes, she asked “I really gotta take all my clothes off?” The officer in charge told her yes and then ordered a female officer to strip-search her.

According to the DOJ report, the female officer then put on latex gloves and searched the woman’s bra area before pulling down her underwear and searching her anus “in full view of the street, although the supervising male officer claimed he ‘turned away’ and did not watch the woman disrobe.”

The officers found no contraband and no evidence of wrongdoing. The woman was released without any charges, receiving only a repair order to get her broken headlight fixed. She then filed a complaint with the department.

The DOJ report states that investigators corroborated the woman’s story with several witnesses and recovered the female officers latex gloves. The officer in charge was only given a “simple reprimand” however, and could not continue to serve in his capacity until he was “properly trained.”

In another incident, the same officer was accused of strip-searching a teenager in public. The teen said the cop was looking for his older brother, who was suspected of dealing drugs. After pushing him against a wall and a frisking him, the officer took off the teen’s jacket and sweatshirt and frisked him again.

When the cursory searches found nothing, the officer pulled down the boy’s pants and boxer shorts to search him “in full view of the street,” the teenager said. According to the DOJ report, the officer said no strip-search took place and instead claimed that he found narcotics during a “consensual pat down.”

No drugs were ever produced in the case however, and the charges against the teen were dropped due to lack of evidence. The boy then filed a “lengthy complaint” against the cop and identified multiple witnesses who saw what took place. He said after filing the complaint, the same officer approached him by a McDonald’s and pushed him up against a wall again.

There, the teen said the cop pulled down his pants and grabbed his genitals, according to the DOJ report. No charges were filed against the teenager in the second incident either, and the boy said he believed what occurred was clearly done in retaliation for the complaint he filed. The DOJ report lists no punishment for the officer in either incident.

In yet another case, a man filed a complaint alleging that an officer in the Central District searched him several days in a row, “undoing his pants” and searching his “hindquarters” on a public street. The man said the officer then threatened him with more strip-searches if he returned to the area.

The DOJ report states that after the man filed a complaint, investigators identified the cop as the officer in charge in the Central District on the dates he was allegedly searched. The complaint was deemed “not sustained” by Internal Affairs however, with no explanation, and the officer received no punishment.

Other complaints described similar incidents, according to the DOJ report, which said that over the last five years BPD has faced more than 60 lawsuits for illegal strip searches. Such searches are considered “degrading” and not permissible as part of a pre-arrest weapons search under the Fourth Amendment, the report says, with Courts consistently holding that they should be conducted in private only “under very limited and controlled circumstances” after arrests.

The DOJ investigation found that BPD officers frequently ignored these legal requirements and strip-searched individuals in public view and prior to arrest. Officers rarely faced any disciplinary action for their misconduct and Internal Affairs investigators consistently refused to adequately investigate frequent complaints, the report says.