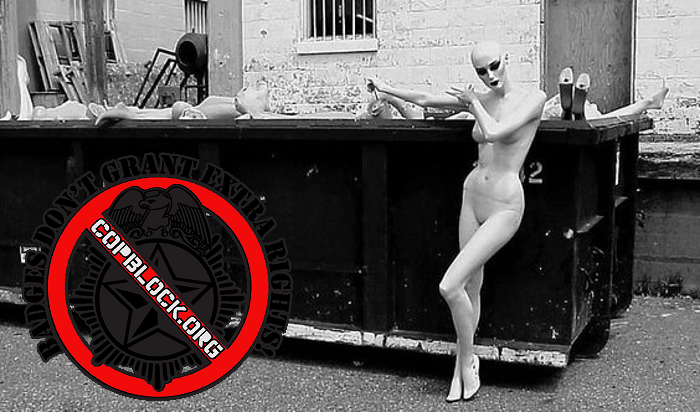 Police in Scranton, Pennsylvania got themselves worked into a killing frenzy on Sunday over a discarded mannequin and fired 67 shots at it.

Across the country there have recently been several initiatives to teach people how to comply with police officers to ensure the safety of both parties. Unfortunately for one bullet ridden dummy, these ‘educational’ outreaches have not made their way into mannequin communities.

Shortly after midnight on Sunday an unnamed mannequin was seen loitering in an alley outside its former residence. Identified as a black male with a hoodie and no pants, police proceeded with caution to investigate. As they got closer it appeared that the plastic perpetrator was holding a weapon. They proceeded to bark orders at it, but probably because its parents did not spank it enough as a child, it refused to comply.

At that point officers had no choice but to protect themselves against the potential dangers of the man shaped clothes hanger and fired a buttload of bullets at it.

In order to protect officers against future inanimate threats police have asked Macy’s, who had been harboring the criminal, and other mannequin-frequented establishments to disassemble their dolls before unleashing their fury on the cities prized dumpsters.

Meanwhile officers have been encouraged to continue engaging in anxiety-driven fits of violence on pretty much anything that gives them the heebie jeebies to keep police unions dues up and group insurance rates down.

In the wake of the incident police supporters have attempted to dig up some dirt on the mannequin in order to blame its history for the police’s actions. Despite their best efforts they have been unable to dig up even a misdemeanor to justify the shooting. Thin blue line junkies were disappointed to learn that mannequins actually have no demeanor at all.

I reached out to the mannequins former colleagues to see if they could shed any light on the events, but they all consistently refused to comment. What are these delinquents hiding?

Although I have attempted to tell the story with sarcasm and humor, it actually happened. Okay, so maybe it didn’t. Real News Right Now sorta screams BS, and there are no external links verifying the story. But it did trick even a habitual satirist like myself at first, and the fact that it was not at all difficult to believe says a lot about policing these days.