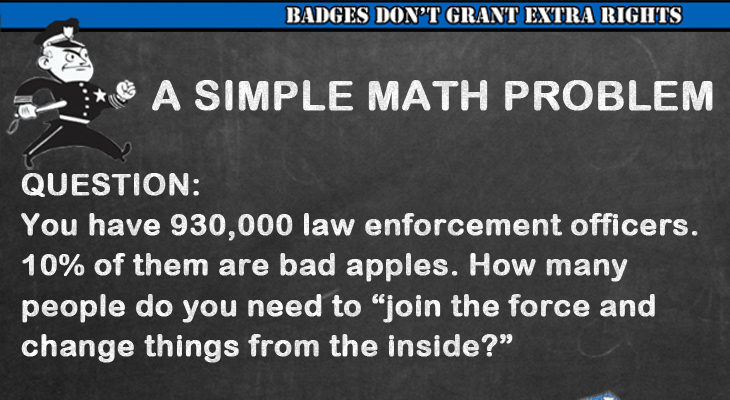 One of the perennial refrains of cops and CopSuckers is that law enforcement critics should “sign up for the academy and try to change things from the inside.” This is almost as common as “99% of all cops are good.”

Both statements are absolutely ridiculous, and completely detached from logic and reality. Rather than providing a valid critique of anti-police misconduct activism, these statements merely reflect two ugly truths about the police.

Do cop apologists even believe the shit that comes out of their mouths? It’s hard to believe that anyone really thinks that 99% of law enforcement officers are good. A more realistic explanation is that people who say this are A-OK with 99% of the horrible things that cops routinely do.  Even saying the majority of cops are good is a hopeful stretch with nothing but blinkered hero worship to back it up.

It is impossible to get an accurate estimate when corrupt unions, law enforcement agencies, prosecutors, judges, and politicians consistently and deliberately work to prevent the public from ever even learning about most misconduct cases, and allow bad cops to resign and slither off to other departments instead of facing criminal charges. In fact, law enforcement disciplinary records are available as public records in only 12 states. We don’t even have accurate statistics for how many people cops kill each year because law enofor cement agencies refuse to provide that information!

The National Police Misconduct Reporting Project found that 6,613 law enforcement officers were involved in misconduct cases during 2010. According to the Department of Justice, there were 705,009 full-time law enforcement officers in the United States that year. That equals .8% of cops in just one year based on published accounts of police misconduct, a huge undercount considering that most cases get buried and never make it into news reports. However, the DOJ’s 2008 Census of State and Local Law Enforcement Agencies listed a total of 929,000 full and part-time LEOs at the federal, state, and local levels, which yields a misconduct rate of .7%, based solely on news reports in 2010.

Score one for the cop apologists? Maybe if this weren’t more a reflection of how successful law enforcement is at suppressing information about misconduct than of how honorable the profession is.

However, we can use the views of cops themselves to give some idea of the extent of at least one type of misconduct. From The American Conservative:

A Department of Justice study revealed that a whopping 84 percent of police officers report that they’ve seen colleagues use excessive force on civilians, and 61 percent admit they don’t always report “even serious criminal violations that involve abuse of authority by fellow officers.

Police culture is, as Radley Balko describes it, “America’s Most Successful Stop Snitchin’ Campaign.” Of course how many cops fail to report criminal acts committed by other cops is only important if you think covering up for bad cops removes someone from the ranks of “good cops.”

2. Telling Critics to Join the Force is an Admission that Police Have No Interest in Fixing Their Profession Oh, it’s Internal Affairs and top brass at the agency who are responsible for getting rid of bad cops? It’s astonishing that people who say this to deflect criticism away from the rank and file cops think this puts law enforcement in a favorable light.  What they are really saying is that every law enforcement agency exclusively promotes bad cops who will protect other bad cops into the very positions that are supposed to investigate and remove bad cops.

Also, even when top brass does move to terminate officers they deem unfit for the job, they often find themselves cut off at the knees by unions:

“Binding arbitration allows cops to appeal any disciplinary action taken by their superiors to outside arbitrators such as retired judges. In theory, these folks are supposed to be neutral third parties. In reality, they are usually in the pockets of unions and dismiss or roll back a striking two-thirds of all actions, even against cops with a history of abuse and excessive violence. The upshot is that police chiefs are powerless to clean house, even as community complaints pile up.”

By the way, who pays for and supports these unions who secure contract provisions such as binding arbitration? Rank and file cops, that’s who. It’s absolutely ridiculous to pretend that aggressively providing cover for bad cops isn’t exactly what police union members expect and demand.

Law enforcement today is a “survival of the shittiest” enterprise where bad cops who commit abuses are allowed to thrive on the blue wall of silence and the in-force loyalty that LEOs prize above their own honor. This ensures that the profession will retain and promote known bad cops, will increasingly attract new bad cops who are drawn to an insular, corrupt culture that protects and rewards criminal behavior, and will continually diminish the numbers of good cops who will take action against misconduct.

This is why cops, their apologists, and order-givers/protectors furiously direct their efforts at making our access to footage and records of police misconduct vanish, rather than making police misconduct itself vanish.

1. A risk-free method of trying that out for yourself. Let us know how it works out for you.

2. An alternative approach from the history books.