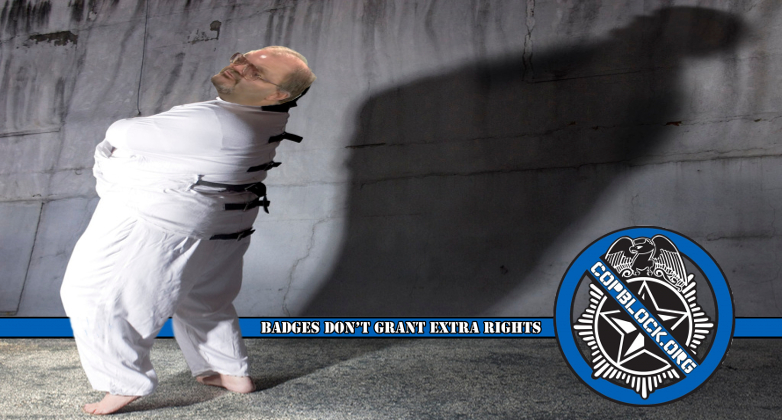 Previously, I’ve done a number of stories (see related posts section below) on the train-wreck that Judge Hafen, a soon to be former Las Vegas Justice of the Peace, has become over the past several months.

The downward spiral began (and has mostly revolved around) when he ordered Zohra Bakhtary, a deputy public defender, to be handcuffed in the courtroom while she was attempting to defend a client, which according to him was intended to “teach her a lesson.”

As a result, hundreds of public defenders across the country criticized Hafen and a local union that represents over 100 defense attorneys also filed a formal letter of complaint against the judge. Not long after the incident, local voters also displayed their displeasure with Judge Hafen when he lost in the primary elections overwhelmingly. In addition, earlier this month the contempt charges Hafen had filed against Bakhtary for the courtroom incident were thrown out by another judge.

Now, with this latest twist in the bizarre road he seems intent on driving down, soon to be Former Judge Hafen has apparently completely lost any sense of proper courtroom procedures and the “decorum” that he has insisted was behind his inappropriate treatment of Bakhtary. In fact, whether it’s bitterness over his electoral loss or just yet another extension of the bullying nature he displayed on the bench that became public during the fallout over the handcuffing incident, he seems like he has pretty much just completely lost it.

Las Vegas Justice of the Peace Conrad Hafen, who lost his bid for re-election in June after the newspaper reported a series of stories about his decision to handcuff a deputy public defender in his courtroom, also refused to give a Review-Journal photographer access to the courtroom, even though television news cameras were allowed in.

The judge’s marshal specifically instructed the newspaper’s reporter not to use a cellphone in the courtroom for any purpose, even audio recording, which is typically permitted throughout the Regional Justice Center. The marshal said the reporter would be handcuffed and taken into custody if he used the phone. Meanwhile, several others in the courtroom continued to operate cellphones.

“Courts are presumed to be open and obligated to be fair,” said Review-Journal Editor J. Keith Moyer. “The Review-Journal will aggressively contest any attempt to limit public access to our justice system.”

A lawyer for the Review-Journal, Maggie McLetchie, plans to file further court documents asking the judge for camera access at future hearings in the murder case.

Relatives of the two victims, 45-year-old Mario Jimenez and 27-year-old Angelica Jimenez, stood in the hallway outside the courtroom, unsure why they were prohibited from observing the arraignment.

The victims were left to die in a burning east valley home in November. They were zip-tied, duct-taped, stabbed repeatedly and doused in gasoline before being lit on fire, according to an arrest report.

On Tuesday, the judge did not give representatives of the Review-Journal a chance to be heard regarding the use of a camera or cellphone at the hearing.

“News reporters desiring permission to provide electronic coverage of a proceeding in the courtroom shall file a written request with the judge at least 24 hours before the proceeding commences, however, the judge may grant such a request on shorter notice or waive the requirement for a written request,” the rules state.

In addition, the rules state that “there is a presumption that all courtroom proceedings that are open to the public are subject to electronic coverage.”

In denying the newspaper’s request, Hafen wrote that the reporter failed to provide “good cause” for filing the request on short notice.

A Justice Court media request form suggests that the document be filed within 72 hours of a hearing.

The Supreme Court rules also carve out exceptions for the use of cellphones in court.

“It will be understood that these devices will be used only for accurate transcriptions of the court proceedings, and are not to be used for broadcast,” the rules state. “Use of an electronic device without permission, other than as described in this rule, may result in the confiscation of the device.”

Civil rights lawyer Allen Lichtenstein, who is not involved in the case, said Hafen was “wrong on several counts” and that public access to courtrooms helps guarantee fair hearings.

“Secret justice is no justice at all,” Lichtenstein said. “We’ve learned that through history. When the public has the opportunity to see how our system works, it operates as a check on abuse. … The default position is that in this country, our court system should be open for scrutiny.”

One of the things that I did when I designed the Cop Block Press Passes several years ago was research the rules and legalities of press passes and the granting of press access. As is stated in the LVRJ articled quoted above, when it comes to public officials there are clear legal precedents relating to reasons they can exclude people or media organizations from press access. (Press passes themselves are fairly irrelevant to this.)

They can legally set up certain criteria for who qualifies for press access, however that criteria has to be equally applied across the board. They can’t base whether you will be approved for formal press access solely on arbitrary things such as whether you are a blogger or internet based media representative instead of print or television media. Nor can they base their decision on editorial direction or you having written (or a media organization having published) something critical of them.

Video and photography can also be prohibited when they are deemed to represent some sort of threat to one of the participants in a court case. However, once again that must be applied universally and not just to specific individuals. Obviously, since their were other media representatives that had been approved and were allowed to film and audio record during the proceedings in question that was not the case and it would seem to be a clear case of bias against a reporter from the paper that has been reporting on Judge Hafen’s negative behavior.

So this latest tantrum by Judge Hafen was not just silly and vindictive, but pretty clearly badly at odds with the law and legal precedent. It’s not hard to figure out why he decided he didn’t approve the request for photography rights of a reporter from the Review Journal and then specifically told a court marshal to pace him in handcuffs if he used his cellphone in a manner that media regularly does. And the part where he (for some unexplained reason) barred the relatives of two people who were viciously murdered from observing the trial of the people accused of those murders is even worse and downright disrespectful to them.

(Full disclosure: Maggie McLetchie, who is identified as one of the paper’s  attorneys in the LVRJ article quoted above is a former partner in the law firm that represented me and several others when we were illegally arrested for writing on public sidewalks with sidewalk chalk.

She’s also a member of the law firm that is currently representing me and two other people in a lawsuit resulting from those illegal arrests. However, I have not spoken to her in regard to this or any other posts I have written about Judge Hafen’s recent behavior.)