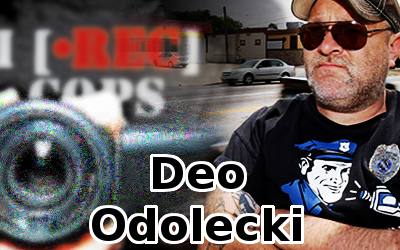 Doug “DEO” Odolecki served 90+ days in the Parma City Jail for ‘crimes’ he committed, and was later convicted of, that occurred on two separate occasions.

From the start of this ordeal the system has worked against Odolecki. Never once has it attempted to protected him, the community or the rights of individuals.

The first occurred in 2014 when Odolecki held a sign down the road from a police checkpoint that read, “TURN NOW.” For this ‘crime’ he was cited with ‘obstruction of justice’ and sentenced to 90 days in jail with a $200 fine.

For holding a sign while standing on a sidewalk. Seriously.

The second incident happened in 2015 when Odolecki came across several Parma [OHIO] Police officers on the corner of a busy intersection. It was later realized the police were dealing with a suicidal teenager and while sympathy for that fact played out in court – as you’ll see below – it was irrelevant.

Several Parma Police Officers have had it out for Odolecki since he started “Greater Cleveland CopBlock” and when they saw him recording them in July of 2015, they snapped into action. He was physically and verbally assaulted, then falsely arrested and charged with misconduct at an emergency (30 days), obstructing (90 days) and disorderly (30 days).

In total Odolecki was sentenced to the maximum for each charge, for a total of 240 days that were then ordered to be served consecutively. Something rarely done with misdemeanors.

The first interaction was initiated by Parma Police department employees because their checkpoint was generating less revenue than usual thanks to Odolecki’s sign. The Parma police employees, at the urging of the city’s legal team, decided to issue him a ticket – for obstruction of justice – but probably realized it was a mistake shortly thereafter.

At this time Odolecki had the advantage because he was nearly a lock to win that case and embarrass these city officials.

IMO, this is why the charge of obstruction, issued in June of 2014, didn’t go to trial until February of 2016. The City (employees) were stalling for time and probably waiting to catch Odolecki with another charge.

That chance came in July of 2015 when while walking home Odolecki stumbled upon half a dozen Parma Police. It didn’t take long for former Parma Police Sgt. Gillisie (who now works at the Parma Justice Center, further showing the close bond between these entities), to approach, threaten, assault and eventually arrest Odolecki.

While those of us who’ve monitored the police for sometime can clearly see the dog and pony show going on here, others cannot. What happened to Odolecki happens to thousands of people each year via the justice system. His accusers, prosecutor and judge are all public officials whom work together closely. There was no way he was ever going to win the trial and not a single public official stood up for the rights they swore in their oaths to uphold.

Again, the police highlighted this in the videos above and the prosecutor by  no dismissing the case (even more so at trial). The cherry on this ‘protect the city’s employees at all cost’ banana split is the statement made by O’Donnell before sentencing Odolecki to the max on all four of his charges (including the one where he was cited for holding a SIGN on the SIDEWALK).

Per the court’s OWN transcripts, that were only recently provided by the court (wonder why), O’Donnell highlighted her love for police, fear for their safety (even though 2015 was the safest year ever for police) and desire to lock Odolecki behind bars:

THE COURT: All right. Now, with that being said the Court is going to move directly to Sentencing. Mr. Spellacy, any objection?

MR. SPELLACY: No objection Your Honor.

MR. GOLD: No objection Your Honor.

I have to interject here because O’Donnell lives in a fantasy world. Probably because her life is constantly surrounded by ‘mother fucking pigs’ who exaggerate their side of the story and/or flat out lie but she’s unable to see any of that. Kind of like her statement about police officers being called names, spat on, harmed or shot at. Sure, of the 900,000 police in the US(S)A I’m sure one of those things happen but not in Parma, OH. Especially not to a police department that is known for jailing people for money (see here and here), charges people who make satirical Facebook pages mocking them with felonies and piles on charges to someone who regular films them!

Furthermore, ‘your honor’, the police don’t help – especially a CopBlocker (and that’s fine by me) – as I so clearly demonstrated at this year’s RNC (right near Parma) as over a dozen cops watched as a woman assault me and a man damage my property. So, no, they don’t always come. In fact, they rarely do or are always too late to help. That’s when they show up, to put up tape and do paperwork, after a crime has been committed most of the time. That’s the truth about police but back to O’Donnell’s fantasy land we go…..

THE COURT: On a personal note my child said to me one day, “mom, I want to be a police officer” and my first  response is, please don’t and I had to take a step back because it’s not that I don’t appreciate the profession, but I don’t want my child to be spit at and things thrown at and shot at and killed, I don’t want that for my child so I have to beg my son, don’t be a Police Officer. No matter what we do, no matter what we say to these men and women, when we call them, they come.

A judge telling her son not to become a cop, now that’s priceless. If her son became a cop he would have to worry more about killing (or harming) someone over a victimless crime he’s enforcing than anyone harming him; at this time anyways. Of course O’Donnell is over looking the more likely factor, that her son is more likely to be killed/harmed by police than assaulted as one, or to even become one.

Maybe that’s a talk she should have with her son before it’s too late and a police officer charges him with some victimless crimes.

Back to the transcript….

THE COURT: I have to say, I have to say this, you people [the police] are far better than I could ever be. When is it going to stop? You know when are we going to stop doing this? When are we going to  stop saying, we hate you, we hate you, we hate you but help us. When are we going to appreciate what these men and women do? They don’t make the law. If you don’t like the law , go to the people that make it. You don’t like the speeding rules, go to the people that make the rules. They’re just the bearer of bad news, they have to follow the rules and what’s so troubling about this case is as we sat and watched, they weren’t doing anything wrong. They were called to help. That’s all they were doing. It’s just so sad. When is this going to  stop.

I guess Judges can have Stockholm Syndrome too. O’Donnell asks, “when are we going to stop saying, we hate you, we hate you, we hate you but help us?” My answer is when I no longer am forced to pay for the police. Maybe people would have more appreciation for the police if they actually provided their service directly to the people instead of being slaves to the will of government leaders. You know, the ones you stated people should become to change things, instead of filming cops (or judges) who blindly support and back the people who make egregious rules (or laws)?

Furthermore, the only person who wasn’t doing anything wrong throughout this was Douglas Odolecki. He was merely exercising his rights and making sure HIS public officials were providing a service that benefitted the people of the community.  Yet, as was clearly shown in “O’Donnell’s” courtroom during the trial, that makes public officials unhappy. So unhappy and embarrassed that they had to use bogus charges, a play on words and a joke of a justice system to keep one man down from showing them up.

Even the appeals system will have a hard time keeping this conviction with the blatant bias that was exposed throughout this trial. Which is where Odolecki is at right now, awaiting a higher court to finally protect him, his rights and his community. Clearly none of those who purport to do so locally are up to the task.

Read Pre-Sentencing Comments from O’Donnell Below: