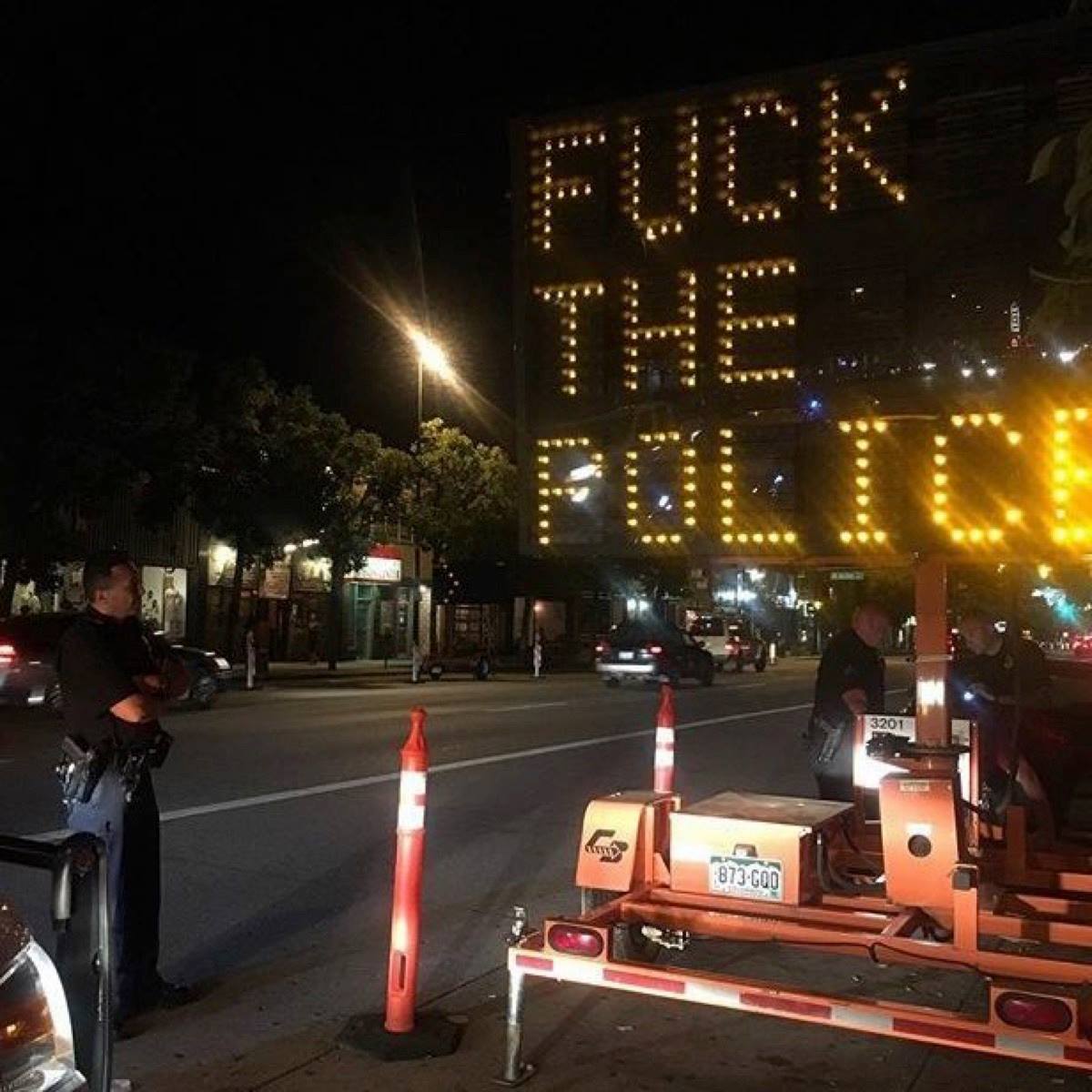 “Fuck the Police” and “No Tears for Dead Cops” were just two of the slogans input into construction road signs over the past two weeks by hacktivists.

The first hacktivist message was posted in Georiga where, according to HackRead.com:

Who needs to hack websites when you can hack electronic road signs? Lately, hacktivists have been acquiring new ways of delivering their messages to masses rather than choosing to deface a no good website. One of those new ways includes hacking traffic signs or defacing billboards to leave messages against politicians and government officials. But Cobb County residents witnessed something different when someone hacked into the electronic sign on Johnson Ferry Road near Sewell Mill Road and defaced it with anti-police message ”F**k the police and ”No tears for dead cops.”

The second sign hack was just yesterday in Denver, CO (where I live, but I did NOT hack this sign) and according to ItsGoingDown.org: A few days ago we gained access to an electronic road sign on Broadway and Ellsworth, a busy area of this city and one of the main roads going through Denver. In the evening we broke into the control box and changed the message on the sign to say “FUCK THE POLICE” so that everyone out that night and everyone driving down Broadway could see it.

While some might think these hacks of road construction signs are the works of anonymous type folks with uber computer skills, the truth is these hacks are basic. Usually easily done because the state agents who work on these signs use templated passwords or they easily succumb to brute force attempts. As stated in the post titled, “Hacking an Electric Sign is TOO EASY.”

Daktronics Vanguard says these passwords can and should be reset, so at least the signs aren’t stuck with their default passwords. So it’s on the signs’ operators, such as state Departments of Transportation, to change the password.

Prank hacks of these highway signs happen all the time. Last week, three different North Carolina highway signs were hacked and reprogrammed to display the message “Hack by Sun Hacker.”

On Twitter, a user who appears to be the same Sun Hacker described the method: “Change the lan of VPN to INTERNET protocol. Scan all the range of the IP on port 23. Bruteforce the password. Add your message.”

Basically, this amounts to switching the signs from a virtual private network (VPN), an ostensibly secure connection separate from the general Internet, to a more accessible Internet protocol, then locating the sign’s unique IP address. “Bruteforce” refers to a technique hackers use to crack passwords by writing a (fairly simple) program that automatically tries every single combination of letters and numbers, starting with the simplest and escalating in complexity. A password like “1234” can be cracked within seconds by a basic “bruteforce” attack.

In other words, what Sun Hacker and his or her ilk do is pretty basic. “Near as I can tell, Sun Hacker is an unremarkable script kiddie who enjoys defacing Web sites,” wrote independent security expert Brian Krebs on his blog.

As evidenced by Department of Homeland Security is getting involved (sic), it follows that more malicious hackers could do more damage than a harmless prank with this vulnerability as well.

And that’s the kicker there at the end, such actions could bring DHS to your door. Which is absurd to me because I find this activism to be exceptional. There’s no damage to property, it sends a message and causes no harm (of course you wouldn’t want to change a sign that could endanger motorists).  Yet, with the way government reacts to such activities I would be very careful before engaging in this activity.