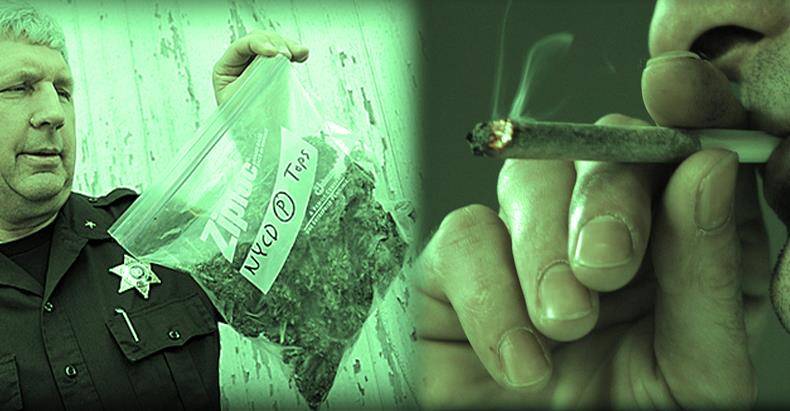 Recently Edmond Dantes (as he’s known here at CopBlock.org), a former blogger at this site, contacted me about a police interaction they had about a week ago. Below is his account of that interaction which goes on to highlight the absurdity of the “War on Drugs” and the fact that Marijuana is even involved in that senseless conversation to begin with. Here’s another story, of another victim who believes in self-ownership and that as human beings we should have the right to decide what we put in our bodies – not the government or its agents. Is that so crazy? Not as crazy as this…..

“Just Trying to Get HIGH” By Edmond Dantes

On August 14 I had just finished a night of dinner and fun with my friends when I headed home where I had a blunt that I had previously rolled earlier in the day.

Seconds later I saw officer Joel Allred of the Hartford City (Indiana) Police Department, badge number 509, stop and back up. He pulled up next to me and got out of his car, walked over to me and asked what I was doing. I told him I was just smoking. He said he smelled marijuana and I said ‘yep’ because that’s what I was smoking. He informed me that as he went through the intersection he smelled marijuana and saw me coughing.

At that time he had me set the blunt on the ground and place my hands on the hood of his car to search me even though my lighter was the only thing I had on me. After proving I had no weapons on me Officer Allred asked what I would do in his situation. I informed Allred that I had not harmed anyone therefore he should not arrest me. After a couple more questions, one or two from a second officer who showed up and unfortunately whose name I did not get, Allred asked me again what I would do in his situation.

I once again told him “Well I’m not hurting anyone so I would not arrest me.” Certain I was going to jail at the start of this Allred said that I would not be arrested and instead would be given a citation for possession of marijuana and he’d seized my blunt for evidence. He had me move over to his passenger window and began filling out paperwork while he was doing this he asked if I dealt, knowing my rights I told him I won’t incriminate myself (probably better if I said “Are you asking me to incriminate myself?”). After printing out my citation he informed me this will go to the prosecutor and it will be up to them whether or not to press charges and the court would contact me. But guessing by the cop car that drove past my building about 30 minutes later as I was taking out the trash I’m certain they are now watching me for suspected drug dealing.

First off, SHAME ON EDMOND DANTES FOR NOT FILMING THIS INTERACTION! You always film the police and never leave your home without a recording device! NEVER!

Second of all, Joel Allred, #FuckYourBadge. For the cops out there that have asked me why I have and wear a “F=ck The Police” shirt, this is why.

Who does Allred think he is to stop a man from enjoying a smoke as he walks down the street of his own neighborhood? Dantes wasn’t harming anyone (and for those morons out there who think marijuana harms people, then he was only harming himself) or creating a disturbance of any kind. In fact, Allred wasn’t even on a call that came in about anyone in the area, let alone Dantes. Yet, for whatever damn reason, after smelling marijuana he decided to double back to ‘protect’ Dantes from himself.

This is a perfect example of what I DO NOT WANT COPS TO DO AND WOULD NOT PAY THEM TO DO. Allred is doing nothing more than harassing a peaceful person and he should be ashamed of himself. He should be publicly shamed and ostracized from those in his community for his actions until he makes his victim whole.

Join me in calling the Hartford City, IN Police Department (765-348-4819) or leave a comment on their Facebook Page stating your displeasure of Allred’s actions toward a peaceful person.