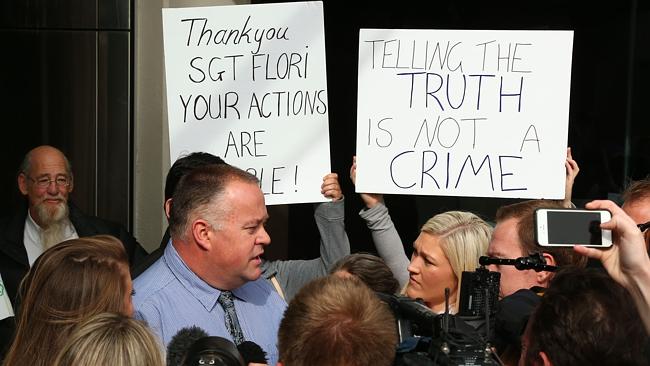 Police employees tend to put their loyalty to each other above their oath. But police are not a monolith. Individuals act, and sometimes individual police employees conclude that they can no longer place their loyalty with criminal actors. Case in point: Rick Flori, who, rather than remain silent about the beating of a man by his colleagues, chose to make public the video that captured the incident.

On January 29th, 2012 Noa Begic was confronted by some strangers wearing badges. Begic was (brace yourself) singing. He’d had a couple of drinks with friends and was walking on the sidewalk in Surfers Paradise — a town on Australia’s east coast just south of Brisbane — when he was accosted. Begic was brought by the badge-wearing strangers to the underground parking garage of their outfit. En route Begic says his kidnappers hit him multiple times in the head.

In the garage — as was captured on CCTV — Begic was assaulted further. Punched, kneed, and slammed onto the concrete. Check out the police employee calmly move the cone away from Begic. Real heroic. And rather than try to dissuade the assault or render aid to Begic, one of the badge-wearing men present — David Joachim — was apparently more concerned about Begic’s blood on the concrete floor, as he retrieved some water to try to wash it away.

In an attempt to control the narrative, Begic’s aggressors claimed that he was a “public nuisance” and demanded money. But that proved too much and was tossed. And eventually Begic was given money (not from the aggressors mind you, but from those they claim to serve). That seemed to be the end of it.

But for Rick Flori, who’d been employed with the Queensland Police Service for 25 years, the incident was not one he could be silent about. He decided to act. Flori acquired the CCTV footage of the incident and shared it with The Courier-Mail

Flori’s colleagues were outraged and rather than admit fault, were determined to learn who had made their misdeeds known. This caused the editors of The Courier-Mail to write in a piece entitled Police hunt for whistleblower a serious miscarriage of justice in which they concluded:

…the police service seems hellbent not on cleaning up any bad apples in its ranks, but rather seeking retribution against anyone who has the courage to speak up about conduct that is as unacceptable as it is unbecoming. That is not justice.

Before long it became known that Flori was the source of the leak. For his siding with justice instead of protecting the badge-wearing aggressors, Flori was “charged” with “misconduct in public office.” In late May, 2016 Flori was told that he would have to appear in district court for a jury trial. No date has been given yet. If that legaland escapade does happen, and if Flori is deemed “guilty,” he could be told that he’ll spend seven years in a cage.

Unsurprisingly, many in Flori’s community have publicly shown their support for him and have spoken out against the real criminals. On June 22, 2015 the Facebook page “Australia Supports Sgt Rick Flori” was created. And whenever Flori has been told to appear in legaland those who agree with his actions turn out as well.

Flori — who has incurred the wrath of his former colleagues — has remained undeterred, noting:

Their stubbornness to correct their behaviour after receiving healthy advise from me, indicates that more needs to be done. It is this very reason that I will not accept poor behaviour from any person no matter how important they think they are. To those good officers who have offered their support yet are too afraid to speak it out loud due to the fear impressed on your minds over many years, I offer you my support… Hold your head high and be proud to do the right thing. You will not only gain the respect of the public but you will feel good about yourself without guilt.

Certainly no one is perfect. We all make mistakes. But the idea is to learn from them and move on. Even better is to not make the mistake yourself, but to impart knowledge from the mistakes you see others make. In the context of this post, I’m addressing you: current police employee. You may have up until now chosen to place your external loyalty with your fellow police employees. Yet you may have internally questioned that loyalty. Learn from this incident, from how Flori conducted himself. Take pride in doing what’s right, not in what you can get away with.