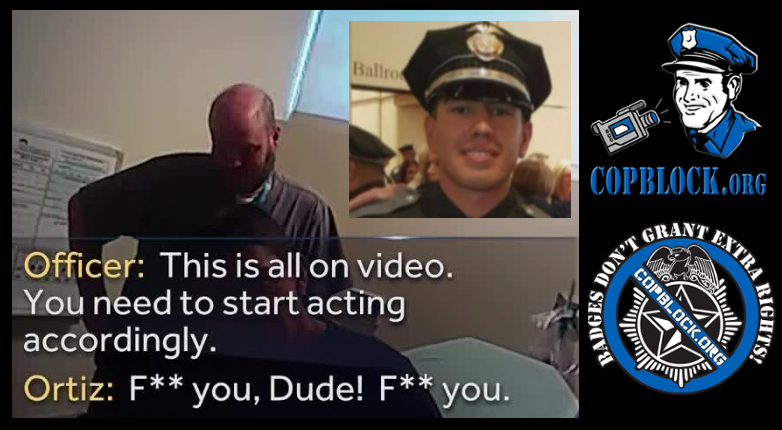 On Friday August 12th, the Albuquerque police received a call about a drunk driver at the MATS Detox Center who had run into a parked car and had then began acting aggressively toward the staff of that detox center. Upon arriving at the location, they soon discovered that the drunken, belligerent driver was New Mexico State Police Officer Morgan Ortiz, who was obviously drunk and not just a little, but to the point he could hardly even stand up.

When questioned he began repeating “11” to each question in a potential tribute to John Lennon and Yoko Ono, i.e. “how much have you had to drink?” – “11” – “where were you coming from?” – “11” – etc., etc. Believe it or not, things got even a little weirder after that, once it was determined that this wasn’t Ortiz’ first drunken rodeo.

The reports go on to state that Ortiz was too drunk to be arrested for aggravated DWI and reckless driving. Instead, he was taken to a hospital and will be summonsed for the charges.

In the lapel video, Ortiz is heard yelling, “I’m an officer of the law.” Ortiz was even heard cussing at officers.

This was his third DWI, according to criminal records. He was previously convicted of DWI back in 2003 and 2004, both before his 21st birthday.

As it turns out, Ortiz, 32, is a graduate of New Mexico State Police’s 89th academy in December 2015. He hadn’t even been patrolling the streets for a year.

“We put him through a battery of tests: psychological, medical tests that, unfortunately, after all the years of him being sober, something happened.” Chief Pete Kassetas said.

Kassetas said he was fully aware of Ortiz’s criminal record when he hired him, and took a chance on the young man.

Ortiz’s gun and badge have been taken from him and he’s been placed on paid administrative leave pending the outcome of both the criminal case and an internal affairs investigation. As embarrassed and unhappy as Chief Kassetas is by this whole unpredictable outcome, he still hasn’t figured out what will be done with Officer Ortiz once he comes off the paid vacation they sent him on while his friends “investigate” this “unfortunate” incident. Although he states that his job is “in jeopardy,” it could be several weeks before the chief decides how hard to slap his wrist.

And remember, if you want to avoid getting arrested, just get really incredibly drunk to the point that they have to take you to the hospital and they’ll just send you home from there. See how that works out for you if you don’t have one of those Magic Suits in your closet.