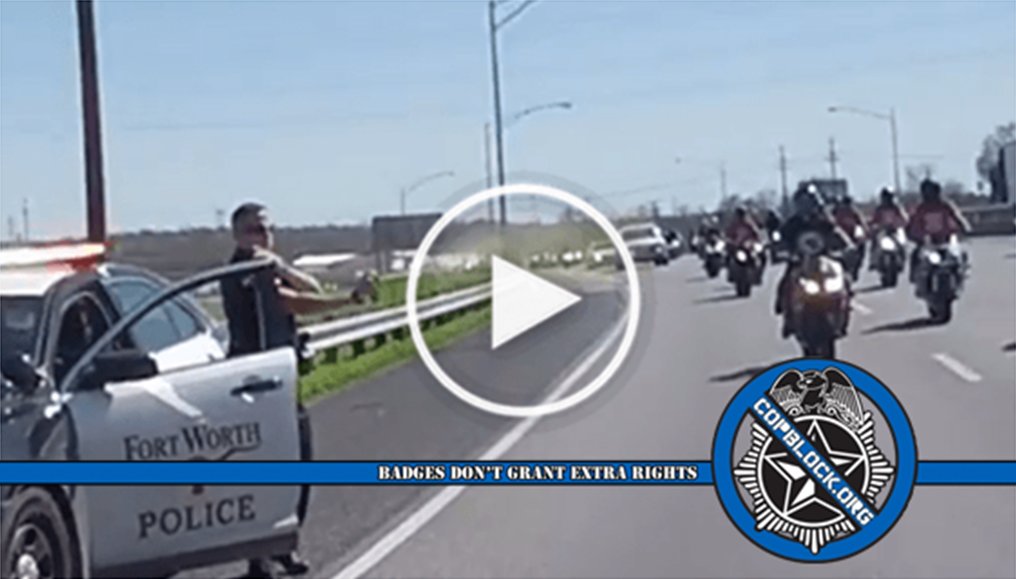 A Texas cop will receive almost no disciplinary action despite a damming video showing him pepper-spraying a group of bikers traveling past him on the highway.

Fort Worth police officials said on Friday that an internal affairs investigation into the incident has concluded and that officer W. Figueroa will not be suspended and only receive minimal “internal sanctions.”

Video uploaded to social media showed a group of about 20 bikers come upon the cop, who had a red pickup truck pulled over in the 1500 block of U.S. Highway 287, near East Maddox Avenue at around 3 p.m. on March 13.

Figueroa is seen in the footage, pepper-spray in hand, aiming the can in the direction of the bikers before discharging it into the wind. The video then shows the bikers veer to their left in attempt to avoid the mist.

“During the big ride today we had a law enforcement officer, that looked as if he was pulling over a truck,” the biker who originally uploaded the video to Facebook, Chase Stone said. “[He] stepped out of his vehicle with mace in hand and began spraying it towards the riders with intention of causing an accident!”

According to incident reports, Figueroa said that he had pulled over Brittany Botella, and her passengers, “after they were blocking traffic to [record] motorcycles driving recklessly.”

“This is a video EVERYONE NEEDS TO WATCH!” Stone said. “Law enforcement is here to protect and serve, not intentionally try to harm others… THIS WAS BEYOND DANGEROUS.”

Botella, the woman who was driving the red pickup truck, said her passengers were filming the bikers with their cellphones when she was pulled over. She recalled that Figueroa deployed the pepper-spray before he approached her vehicle.

“I thought it was sand up off the bikes that was making everyone choke and stuff,” Botella said. “But it ended up being the mace.”

Botello said that Figueroa then opened her passenger door and began confiscating cellphones as evidence of the motorcyclists’ reckless driving. She was ticketed for driving without a license but asserted that that the only real danger that day came from the actions of Figueroa and not the bikers.

Additionally, it was said that the pepper-spray blew toward the stopped pickup and hit a pregnant passenger and a little girl. The little girl reportedly required hospitalization.

Following the incident, Fort Worth police removed Figueroa from patrol duty and launched an investigation into what occurred. On Friday however, Forth Worth Sgt. Marcus Povero said that the probe had ended and that Figueroa will receive only minimal sanctions.

Citing that “nobody that witnessed or was involved in this situation ever filed a complaint” with the department, Povero said Figueroa will likely receive no other disciplinary action except for a commander’s admonishment or retraining.