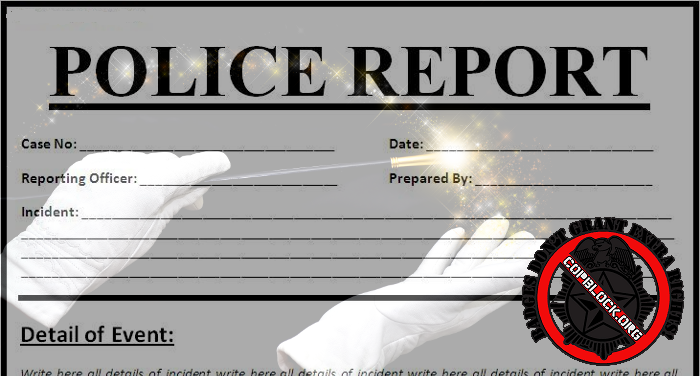 A police report is used in many daily interactions as a way of verifying information, even when the police have not verified anything in those reports – so what makes a police report the gold standard for truth?

This afternoon you returned home from work to find a window opened and a number of items missing. These sort of home robberies have plagued your neighborhood for months and the culprits have eluded police efforts to catch them. You realize that calling the police will only be a waste of time, and since you are illegally collecting rainwater in the backyard near the window the thieves crept in, you could actually end up with criminal charges for calling them.

So you skip all that nonsense and just call your insurance company to report the stolen items that are covered under your policy. However during your conversation with your agent, you are told that you must file a police report in order to make an insurance claim to replace your stolen items.

In other words, despite the fact that you can provide evidence that you purchased these items and that they were removed from your home without permission, nothing matters until a man in a magic costume puts your story on a magic piece of stationary with police insignia on it.

This is not an exaggeration, it happens all of the time. Many areas of day-to-day life require some sort of verification process, and police reports are often the gold standard of these.

Now lets say that you called the police after the robbery. They came to your house, asked you a bunch of questions and maybe dusted the windowsill for fingerprints. From this they make a report which basically just says everything you could have told your insurance agent yourself. The only difference is that the police report comes from the police, so even if the information is the same, it is now magically considered credible.

What was it about the police report that made your statements more credible? Did the officer interviewing you have telepathic powers that were able to discern you were not lying? Does police stationary turn any statements on it into facts through some magical transmogrification? Just how does the police report add any credibility, especially if the crime is unsolved?

The monopoly on truth held by police documents is another sign of the monopoly police hold on violence, justice and public services. All of these are created by magical thinking that a human being becomes something more than human when they put on a shiny badge. And at the center of this magic spell, this grand illusion, lies the fact that police force you to participate in their system just to live in the modern world.

That you have no choice to acquire truth or protection outside of police says all you need to know about that institution. Monopolies are tyranny and the police state is oppression.

Put THAT in your police reports.

BADGES OF AMERICAS FINEST: A PICTORIAL GUIDE TO THE BADGES By James C. Casey NEW