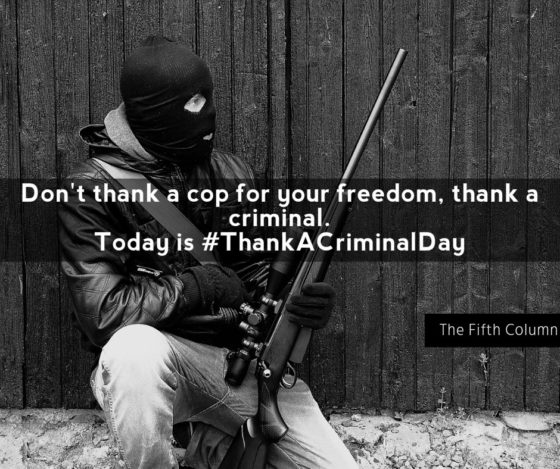 The article below was written by Justin King, editor of the website, the Fifth Column, and since I was the inspiration for said post, I thought I’d share it here as well.

King’s post explores the reason why it is the criminal – not the police – who are responsible for defending freedom even when their actions could result in extended periods of time behind bars. Whether you’re growing pot or brewing up some cold ones, the real people responsible for the freedoms you enjoy are not the usual suspects but are in fact lawbreakers and outlaws.

Originally Published at The Fifth Column by Justin King

What causes societal change? Crime. From acts of civil disobedience to organized criminal endeavors; it’s somebody willing to stand up and claim a dormant or unasserted right that forces government’s to change. Contrary to the founding documents of this country, rights are not “self-evident”. If they were, “we the people” would have meant more than “we the people who are white” when the words were first penned. Rights are claimed, asserted, and sometimes taken by force.

The “law and order” crowd is squirming at the concept. Luckily, the members of that crowd are typically ardent defenders of the Second Amendment. That right wasn’t always there. Reaching back through history, tyrants of all sorts disarmed their populations. That right was claimed through the blood of criminals. Of course, today we call them “patriots” but that was a different year. They were criminals and traitors, nothing more. They only became heroes once they succeeded in claiming their rights.

Even today, it is the criminal that defends the right to bear arms. It’s such a truism that even the mighty National Rifle Association pays homage to the last line of defense: the outlaw. The constant cry that gun bans do not work and the statement that “once guns are outlawed, only outlaws will have guns” is valid because of the lowly criminal. Without those who refuse to bend to the will of the state, the sacrosanct right to bear arms would have long ago been destroyed.

Americans practice the religion of their choosing because of the criminal. Americans all know the story of the founders’ flight to avoid religious persecution. They didn’t convert to their religion on the ship. They believed and worshiped as they chose prior to leaving. They were criminals. They were “treasonous.” Yes, Americans owe their right to worship as they choose to criminals.

The right to remain free from unreasonable search and seizure is constantly being eroded. Who stands in the way of it’s complete demise? The criminal. Case law is filled with the lowly criminal refusing to grant the government unrestricted power to harass, detain, and search the citizens of this country.

Who stood against slavery? Many will answer: The Union Army. Before them, it was the criminal. It was the network of thieves who stole the property of Southern plantation owners and brought them to freedom. It was those unwilling to stare blindly into the hideous blot of slavery and do nothing. Those slaves who were smuggled out of bondage brought their stories North and galvanized the abolitionist movement. The criminals of the underground railroad stood on the forefront of that fight.

Voting wasn’t always a right for everyone. Americans know of the campaigns of civil disobedience and riots that led to protecting the black right to vote. Women engaged in the same behavior. The British and American movements for women’s suffrage were sister movements. The British obtained the first victory in 1918 with the  Representation of the People Act 1918, their American sisters successfully claimed their right a year later. How were these victories achieved? By arson, smashing windows, and assaulting police officers. Yes, criminal activity won women the right to vote.

Americans can freely express their sexuality because of those who refused to bend to the laws regulating the activities of Americans in the privacy of their own homes. As recently as 2014, a dozen states still had laws barring homosexual behavior. The laws were all rendered void in 2003 when criminals named John Lawrence and Tyron Garner took their case to the Supreme Court. They claimed their rights, and they protected the rights of other Americans.

Having a cold beer is as American as apple pie, but only because gangs of thugs refused to allow the government to regulate the trade. If Americans crack open a beer on #ThankACriminalDay, they should certainly toast those who made it possible.

The list goes on and on. Gambling, abortion, freedom of speech, and so on are not gifts from the government. They were earned through the fights of countless criminals. Many might say that the above acts have nothing to do with the drug dealing thug down the road. Tell that to the veteran who came back from Iraq with PTSD and is currently using cannabis to relieve her pain, or the child whose seizures are being controlled with marijuana. Yes, today’s thug enabled those changes by refusing to bow before the altar of the state. Some crimes are just crimes, but if there is not an identifiable victim, it probably isn’t a crime. It’s a lost freedom.

Criminals and traitors are on the front line of every battle for American freedom. If that battle is lost, they are the last the line of resistance. Whistleblowers, leakers, and hackers have enabled Americans to see the tyranny that awaits them. They became criminals in the process of protecting American freedom. It is without a doubt that in today’s society a felon’s cap is noblest crown a free man can wear.

Author’s note: I’d like to thank Brian Sumner for providing the inspiration for this article.