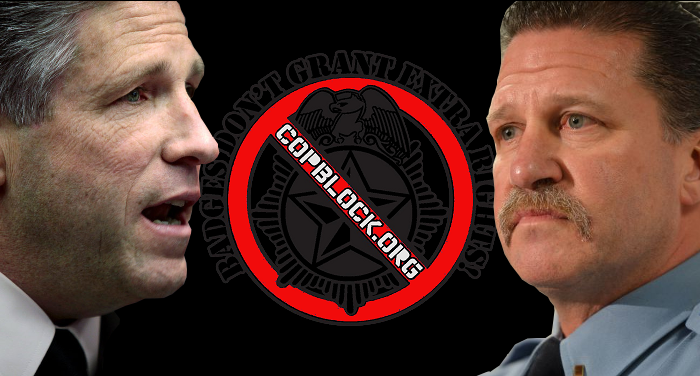 The most culpable parties of the excessive abuse and vanity of the modern police state are the leaders of police labor unions, and so activists should focus more of their attention on these megalomaniacs.

Policing has become its own culture, its own ideology and its own state.

As such it has leaders – individuals with centralized power whose vision and dictates shape the police state. And for the federated police state those leaders are the union leaders.

Is that because union leaders are vile lizard people sent from the Venusian Illuminati to destroy America and humanity? Probably not. More likely it is because they are just doing their jobs.

The job of a labor union is to protect its employees from their employer. In this case taxpaying citizens are the employers of police, and their unions job is to intervene whenever we attempt to dismantle the career of individual police or weaken the profession. Which means that when a cop kills an innocent civilian, it is the job of their union to try to sweep it under the rug. Otherwise nobody would bother paying union fees.

Now what kind of people do you think would be attracted to a career in an organization dedicated to protecting cops from the crimes they commit? How would doing that day in and day out affect your worldview, and ultimately, the parts of your humanity like compassion, empathy and a desire for truth?

If you are guessing that it would create a heartless psychopath with the style and soul of a mob boss, there are already some pretty good examples to evidence your claim.

Patrick Lynch (cover photo, on left) of the NYPD is the most powerful police union leader in the country. He is also one of the loudest purveyors of hyperbole and propaganda. When he is not busy claiming that police are above public judgement, or that every police abuse to ever occur by the NYPD was actually justified, he likes to incite the fear and anger that fuels the dangerous fire of bogus headline grabbers like the War on Cops.

Then you have Bob Kroll of Minneapolis, another outspoken egomaniac who likes to organize police protests which a send the message that blue lives matter more than any others. His tactics and ethics have been called into question by community members and leaders, but the mustachioed cowboy manchild sees himself in the same was as any other officer – above question. He has earned a (probably fair) reputation as a racist and even been asked by the police chief to resign.

In Cleveland Steve Loomis leads the local police union. His method of choice is to shift responsibility from the egregious offenses of his department and police nationwide by blaming the president. I am not going to claim that Obama has done much of anything to help the American people with their police problem, but he sure as hell is not responsible for the falling public opinion of police. The actions of police like those in Cleveland who killed Tamir Rice are what causes the public to get salty with the police state.

Dean Angelo is the head honcho of the Chicago police union, a department with a reputation and a body count that would boost any fantasy police league team – and even their very own Guantanamo. He is another fan of misdirection and lies whose statements would lead you to believe that no CPD officer has ever faltered from the law or committed wrongdoing.

All over the country (mostly) men like this are leading our police departments and shaping their culture and policies through denial, misdirection and lies. Which as I said before is only a matter of doing their jobs.

This is why more attention and public pressure needs to be exerted on police union leaders. They are at the very center of the entire discussion. They are the architects of the foundation upon which the police state has been built. Their power, influence and psychopathy make them the most potent targets for criticisms of policing.

If we can expose and disempower these nefarious individuals and the organizations they represent, we can strike a powerful blow against the police state. Police union leaders are the police states Achilles’s Heel.