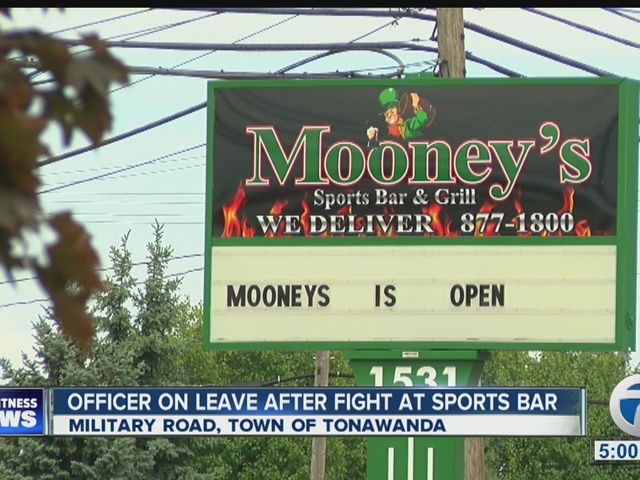 The story about a Tonawanda, NY police officer who was involved in a fist fight while in a local restaurant’s bathroom doesn’t seem anything out of the ordinary at first. Yet, if you look a little closer and use a little bit of logic there seems to be more to the story that meets the eye. Which then leads to a few more questions…. but before we go there here’s the story from WIVB:

Police in the Town of Tonawanda say they are looking into incident where an off-duty officer allegedly got into a scuffle with someone at Mooney’s on Military Rd.

During the alleged Saturday fight, police say a 50-year-old man suffered a deep cut and a sink was broken. At least two people witnessed the alleged fight, which occurred in the restaurant’s bathroom.

Chris McCann, the owner of Mooney’s, told News 4 that both men were regular customers, and that they never caused problems.

The officer was there for less than a minute and was not served at all when the alleged fight occurred, the owner said. The other man had one beer, and neither appeared drunk, according to the McCann.

Over six years’ time, the owner said only one or two fights have broken out at Mooney’s.

The officer involved is on paid administrative leave, pending the results of the investigation.

Neither man was arrested and no charges have been filed at this time.

McCann tells News 4 there was surveillance footage, but because there is not a camera in the bathroom, much of the incident was not captured.

First, let’s talk about the double standard for Mr. Off Duty. Do you think anyone besides a police officer would get to injure someone, damage property and NOT being taken to jail? Not only were they not arrested but they will not be charged either.

To be honest, I’m not advocating for them to be charged and punished by the state. I’m just pointing out that you and I wouldn’t get this treatment, not even close. You or I would have been taken to jail, taken in front of a judge, had a bond set (maybe) and then spent the next year of our life trying to beat the case.

And most of those cases are lost or the person is forced into a plea deal but not cops. They don’t face charges, they don’t go to jail for the night and they don’t have court dates.

Second, why are two grown men in the bathroom having a conversation? What are they talking about that could suddenly lead to a physical altercation?

The restaurant owner said both men were ‘regular customers’ and that they had never caused problems before. So the duo has met at this location before and regularly?

You know who does things like that? People who are involved in illegal activities, that’s who.

I’d be willing to bet that these men are involved with drugs in some form and had some sort of dispute. The police know this, or were lied too and bought said lie because cops believe cops, and simply covered it as a fight between an off duty cop and his buddy. The buddy didn’t want to press charges for being injured and the restaurant probably decided not to when restitution was promised.

This makes it somewhat easy to cover up. Yet, when you add in the comments about the duo meeting at the restaurant before, lack of cameras in the bathroom (and why they went in there to talk) and the fact that property was damaged causing personal injury. One can clearly see that something else was going on here.

Seriously, there is no way that this cop was involved in anything that’s ‘pretty cut and dry.’ What we have here is another case of cops getting special treatment while being hypocrites themselves. Not only the off duty pig who’s doing things he probably jails people for while in uniform but the colleagues who covered his actions, while taking those who don’t wear a uniform to a cage for doing the thing.

What do you think? Simple fight amongst buddies or a deal gone bad?