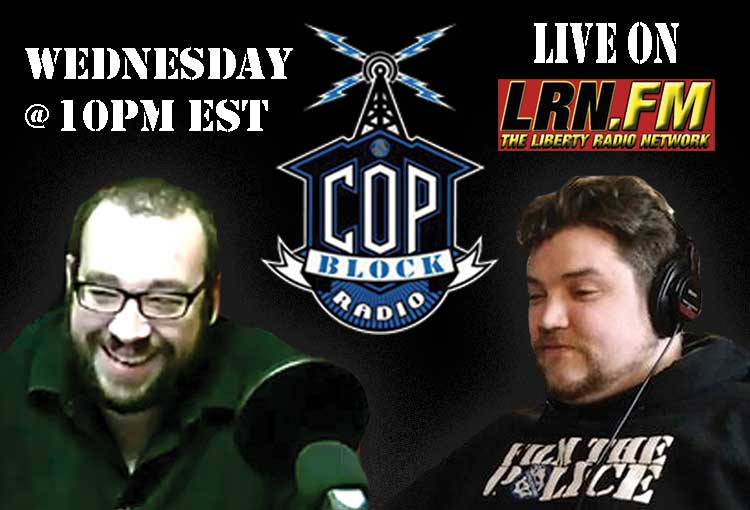 This past episode of Copblock Radio was hosted by Matt Taylor, Severin Freeman and Paul Gordon. Most of you know all about Severin and Matt so we wanted to take a moment to introduce some of the work that our friend Paul Gordon does.

Paul is a long time radio personality. His projects include Disassociation Nation. That show is described as a provocative, rapid fire current events talk show hosted by Jeff (Niz) Nyzio and Paul Gordon Collier that airs weekly on FPRN.

Paul also is the Co-host of a show called “State of wake”.  They are described as  “a subdivision of our parent company, Newswake Volunteer. We provide “edutainment” for the Liberty Community. We ask the question, What’s Your State of Wake? We provide content that features liberty in various formats, including podcasts, videos, memes and articles.
We hope to serve the Liberty community with entertaining, thoughtful content, as well as to reach out to those who might be “liberty curious.”

Finally Paul is half of the podcast “Full Auto” , a Libertarian, freedom orientated, gun rights podcast. Its described as “Highlighting the Opportunities and Threats to Individual Self-Defense. We are part of the News Shooting Self Defense Network”

You can check out all his projects in the links above. Paul is obviously more than qualified to speak about the police state and even provide his own insights on solutions from first hand experience. Armed with “Disorder” (the name of his very large gun) he is ready to defend himself and his views thoroughly. We are very excited to be adding him to the regular roster of guests and Co-hosts.

Our top story this week was the riots in Milwaukee. We spent most of the show digging deep into the topic. We started with a prerecorded interview with myself (Severin Freeman) and Allentown Copblock’s Rick Gonzalez. After watching YouTube live streams of actions on the ground, Rick and I decided we needed to speak out. You can find that whole interview HERE.

Next we hit on a popular story around the country. One of the stars of the Netflix Documentary “making a murderer” was released recently with charges dropped.  The story reads ” The conviction of a Wisconsin man who appeared in the documentary “Making a Murderer,” has been overturned by a federal judge. Brendan Dassey, who was convicted in the murder of Teresa Halbach in 2007, will be released from prison unless prosecutors bring him to trial again within 90 days.” FULL STORY HERE

Our final story was an interview of our friend Kristan Harris of the American Intelligence report . Kristan went in person to report from the ground in Milwaukee during the riots. He ran into a reporter from “Info wars” and was able to give a detailed account of things from his point of view. You can watch that whole interview HERE.

Tune in every Wednesday at 10pm EST. for our live show at copblock.org/show . Always remember to film the police!