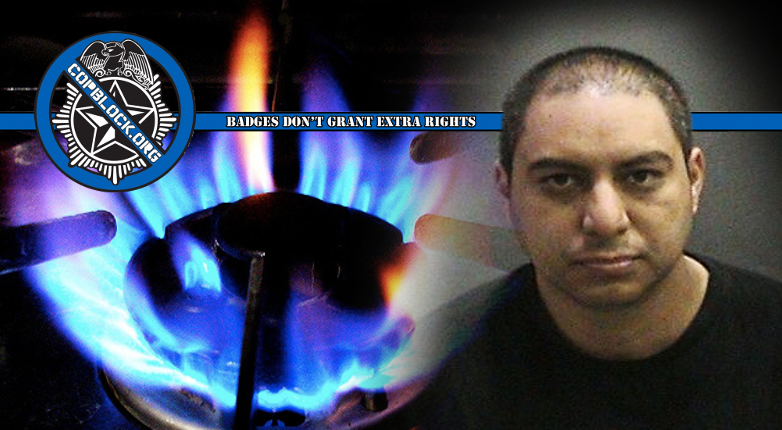 As CopBlock Network Contributor Asa J described in a post last year, Los Angeles Sheriff’s Deputy Alejandro Flores viciously attacked his now ex-girlfriend. In what has been characterized as the culmination of a pattern of abuse, Flores beat his girlfriend (who only wants to be identified as “Maria” due to fear of further attacks), used a gas stove to set her hair on fire, and then threatened her with his gun to force her to stay at the house after the assault.

All of that and numerous previous assaults took place in front of their two year old son. She was only able to escape by sneaking out of the house and confiding in relatives after he left to go Protect and Serve the County of Los Angeles as part of the LASD. The incredibly serious issue that precipitated Flores’ sadistic actions involved a dispute over a pacifier (presumably intended for the child, not Deputy Flores).

Flores was charged with nine felonies, including three felony counts of domestic battery with corporal injury, two felony counts of assault with a force likely to produce great bodily injury and a felony count each of aggravated assault, criminal threats, dissuading a witness, and false imprisonment. As a result, he faced a maximum of up to 14 years in prison. The prosecutor offered him a plea deal which would have required him to serve five years in prison.

However, the judge had a different idea of how deep a Policeman’s Discount Deputy Flores deserved. He not only gave out just a one year sentence for the savage, almost deadly beating(s) “Maria” had been subjected to in front of her child, he even went so far as to disregard the prosecutors requests to make Flores serve his time in a state prison, where he would be required to do the entire year. Instead, Judge Rodger Robbins sentenced him to county jail, where he’ll be released to look for another woman to abuse and possibly kill in just six months.

The victim in the case for obvious reasons not happy about the judges actions and rightfully states that he is getting off easy because he had one of those Magic Suits that renders people impervious to real consequences for their actions, no matter how illegal, immoral, or violent they might be, at the time of the attack.

The 34-year-old (Flores) stood emotionless as he listened to his son’s mother speak about the violence.

“He pushed me against the stove yelling, ‘Is this what you want?’ At that point, he turned on the gas burner, setting the my hair on fire,” said the victim, who did not want to be identified.

As she read her victim-impact statement, she urged the judge to issue a stiffer sentence.

“Alejandro chose a career in law enforcement to protect and serve. Apparently, that doesn’t cross to his personal life and the sentence confirms it,” she told the courtroom.

The victim said there had been violence before, all of which occurred in front of their young son…

In her victim impact statement, the victim also urged the judge to consider what message the sentence sends to other victims of domestic violence.

“Knowing what it finally took for me to finally stand up for myself and my son, with a one-year sentence it is almost like I’m being victimized again, now too by the system I trusted to protect me and my son,” she said.

Yet another Hero In Blue held to a higher standard. It’s almost as if Deputy Flores already knew the fix was in when he turned down that five year plea deal offered by the prosecutors.