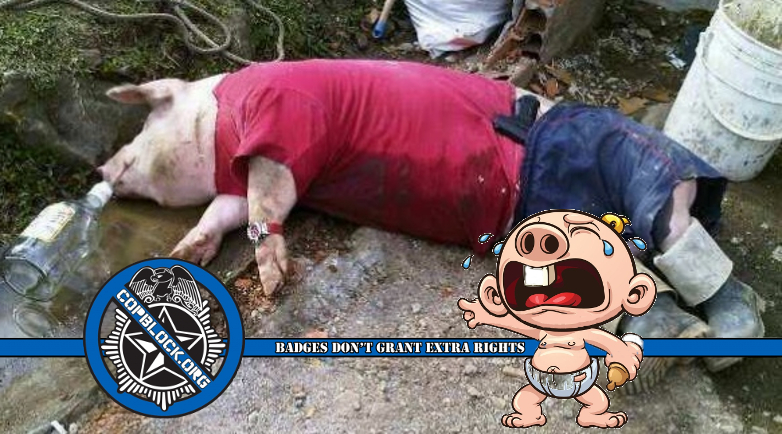 A cop from Fort Lauderdale, Florida “somehow” ended up in a drunken brawl with a security guard while holding a baby. In the process of hitting that security guard twice in the face during a drunken tirade and then getting slammed to the ground, Officer David Knapp also managed to have his gun fly out of its holster.

Knapp later testified he didn’t know how or even why he ended in a private parking area after making a trip to the bathroom. He did theorize that his temporary amnesia could have been because he was really tired, because of head injuries he suffered while getting his ass kicked by the security guard, or possibly even because of all that booze he drank beforehand.

Fortunately for Officer Knapp, prosecutors there in Fort Lauderdale have promised not to get to the bottom of it. Ironically enough, due to him having been really drunk his only “punishment” for drinking (a lot) while carrying a firearm, endangering his child, trespassing, and assaulting someone will be a twenty day suspension. (Try that without a Shiny Badge and see how it works out for you.)

According to an internal police investigation, Knapp was stumbling around the parking garage after a day at the beach with his wife and child. The couple shared a bottle of champagne at Coconuts Restaurant in the afternoon, shopped at Beach Place and then stopped off at the Ritz-Carlton bar, where Knapp had three Johnnie Walker Black Label drinks.

Knapp took his child with him to the bathroom and wound up in a restricted portion of the hotel’s parking garage. A valet spotted him about 9 p.m. and notified security.

Knapp refused to answer loss prevention officer Fernando Ramirez’s questions, flipped him the bird and then struck him twice in the face — all while holding his child — when Ramirez continued to request identification from Knapp, investigators said.

“During the physical altercation, Officer Knapp’s off-duty weapon flew out of his holster and landed on the ground,” Dietrich said.

It wasn’t until Knapp had been subdued and Ramirez checked for identification that he discovered Knapp was a police officer. While Ramirez held Knapp down, other hotel employees who arrived took care of the child, whose age and gender were not released.

Knapp’s wife was unaware of what had happened, unable to reach him by phone and wondering why he hadn’t returned from the bathroom when hotel personnel brought the child to her.

Knapp, who suffered head injuries during the altercation, told investigators he had no recollection of the incident. When asked why, Knapp said, “It could be anything from being tired to being, uh — having had alcohol to having unfortunate injuries due to the event.”

Ramirez declined to press battery charges against Knapp and prosecutors decided not to press the case because they said the evidence showed Knapp was too drunk for them to prove he intentionally struck Ramirez.

Knapp, a patrol officer, was hired in October 2007 and earns $81,474 annually. He told investigators he was embarrassed by the situation and “I’ve never been like that before.”

They did however make him pinky swear to at least put his baby down next time before he starts slapping innocent people reacting to his drunken behavior around.