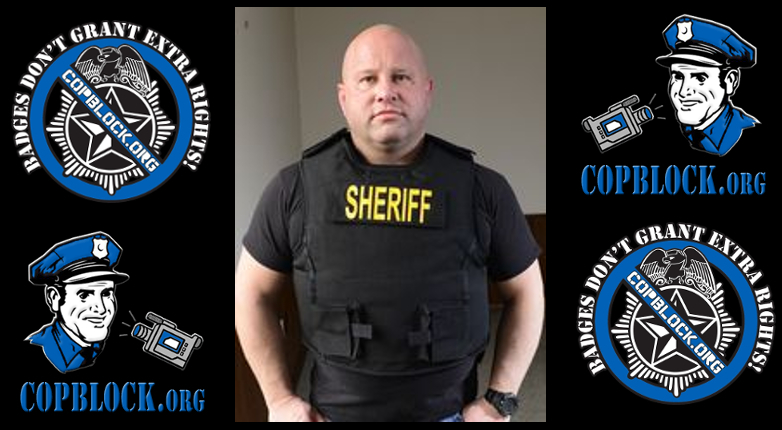 Sheriff Kyle Overmyer of Sandusky, Ohio was pretty much the shoe-in to win re-election  to the post he was originally appointed to after the previous sheriff died and a nice little raise that goes along with it in November. Although, the Republican Party hasn’t decided whether they should withdraw their support just yet, the fact that he was just indicted on 43 charges, 38 of which are felonies, related to drugs and theft of cash from his and surrounding jurisdictions might put a slight dent into his campaign.

Apparently, not only did he go doctor shopping to get multiple prescriptions of opiates filled, but he also drove all over the county collecting drugs people had left in various departments’ drug take-back boxes, which are intended to allow for the safe disposal of expired or no longer needed prescription drugs. According to the Good Sheriff, he was collecting all the drugs he could get his hands on in order to promote communication between the departments.

Then, just to round things off, he stole a bunch of money from the department over the course of two years by writing himself checks and tampered with official police records to cover up that theft.

The sheriff faces several felony counts of deceiving physicians and pharmacists to obtain prescription pain medication on various dates beginning April 2014 through January 2015, including nine separate cases of seeking Percocet, five instances in which he sought Hydrocodone pills and one case in which he sought Oxycodone.

“He was indicted on various counts of deception to obtain drugs, filing a false financial affidavit, tampering with records and theft of drugs,” Hamilton O’Brien said Tuesday night.

The indictment, which was released by the Ohio Attorney General’s Office Tuesday night, also alleges that Overmyer falsified financial statements between January 2009 and August 2016.

Last January, it was revealed the state was investigating Overmyer in connection with the collection of take-back prescription pill boxes from county police departments, also included among the 43 charges in the indictment.

During this  period, Overmyer is alleged to have improperly collected the boxes from April through August of 2015.

Also included in the indictment were allegations that Overmyer tampered with records between November 2013 and December 2015.

Overmyer is expected to appear in court Wednesday before visiting judge Patricia Cosgrove.

• Twelve counts of tampering with records, all third-degree felonies. Overmyer is alleged to have tampered with records concerning the departments Furtherance of Justice account.

• Twelve counts of deception to obtain a dangerous drug, all fourth-degree felonies. Overmyer is alleged to have deceived physicians and pharmacists in order to obtain prescription pain medication, according to DeWine’s release.

• Six counts of theft in office, all fourth-degree felonies. The sheriff is alleged to have improperly taken medication from prescription drug disposal drop boxes.

• One fifth-degree felony count of theft.

Hamilton O’Brien, the Delaware County prosecutor, said Overmyer is still the sheriff in Sandusky County, and said she is working with Overmyer’s legal counsel to have him turn himself in.

The investigation that resulted in the charges is actually the second investigation launched by the Ohio Bureau of Criminal Investigations. The original investigator, Special Agent Jeff Cook, had to be removed after he told police chiefs from the departments Sheriff Overmyer had been improperly collecting the drugs from that the investigation was “trivial and minor” without issuing any warrants or subpoenas  and without interviewing anybody from those departments in relation to the matter.

The dozens of subsequent charges emerged after two other agents were assigned to investigate. Meanwhile, Sandusky Sheriff’s Deputy Sean O’Connell is being investigated and could possibly face charges himself for acting as a whistle blower by leaking files containing the information that justified those charges to Carol Hamilton O’Brien, a special prosecutor assigned to the case.