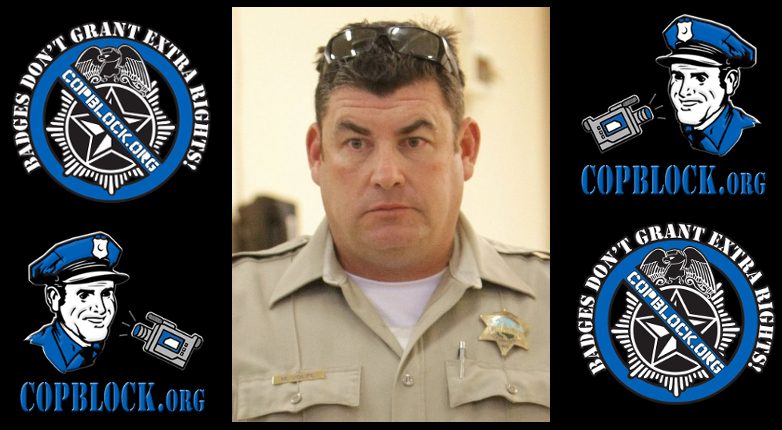 Senior Deputy Matthew Volpe of the Ventura County Sheriff’s Office is just the latest in a string of cops caught “sampling the goods” from a police department prescription drop box. The drop boxes are supposed to represent a way for citizens to turn over old or unneeded prescription drugs for proper disposal that eliminates contamination of water supplies or other environmental concerns. It also eliminates the threat of heavily armed, violent people catching them with them after the prescription has expired and assaulting and/or kidnapping them because they no longer have permission from the State to put that particular substance in their body.

Instead, in increasingly numerous instances they’ve become a sort of bargain bin for cops to augment their own supply of drugs to satisfy their habit in between arresting people for drug offenses and other victimless crimes or generating revenue. In fact, just yesterday I posted about the sheriff of Sandusky, Ohio having been indicted for cruising around illegally collecting the contents of drug drop boxes throughout several departments within Sandusky County. Sheriff Kyle Overmyer is now facing 43 charges, including 38 felonies, for his habit of “grazing” for free drugs and also for all the money he stole.

Deputy Volpe wasn’t quite as prolific as Sheriff Overmyer, but he had a good run and he would have gotten away without too, if not for a meddling employee (actually) in charge of emptying the drop box at the sheriff’s office.

Via the Ventura County Star:

Investigators were alerted in early May after a sheriff’s employee who regularly empties the disposal bin noticed a disparity in the amount of medication compared to a day earlier, the Ventura County Sheriff’s Office said.

The employee alerted investigators, who then looked at surveillance footage from the East Valley station’s lobby on Olsen Road, where the bin was located. Investigators said they saw someone wearing a sheriff’s office uniform use a key to unlock the bottom of the bin and remove items. They identified the person on camera as Volpe, who was assigned to the Thousand Oaks police motor unit, officials said.

Investigators turned over evidence to the District Attorney’s Office for review and consideration of filing criminal charges of embezzlement and possession of a controlled substance, officials said.

Volpe was placed on administrative leave in May.

Investigators said additional surveillance footage shows Volpe removed items from the bin five other times between April 12 and May 6.

Investigators said they searched Volpe’s home, his work locker and assigned sheriff’s motorcycle. They said they found prescription medication that was not prescribed to Volpe inside a compartment of the motorcycle.

Looks like the Good Cops at the VCSO have already started setting him up with the obligatory Policeman’s Discount, though. In spite of being caught on camera at least six times stealing from the drop box and being caught with the actual drugs on his motorcycle, he’s been charged with just two misdemeanor possession counts and another misdemeanor petty theft charge.

After the Ventura County District Attorney’s Office sets him up with a plea bargain, he’ll likely be facing a stiff fine and a couple days of suspension at the end of the paid vacation he’s currently on before he’s allowed to get back out there and arrest people for drug crimes again.