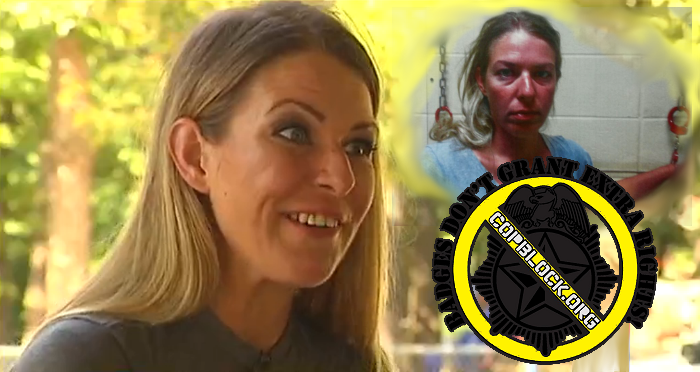 The following story was sent to us by an anonymous member of the Cop Block Network through the CopBlock.org Submissions Page, where people just like you can share your own stories of police state insanity.

April 27, 2014 Mayflower, Arkansas was hit by an EF-4 tornado. Melissa Brown decided to put the knowledge she gained from her degree in emergency management, along with her leadership skills from her combat experience in Iraq as a soldier, to volunteer to help. She delivered water and food to residents that were affected.

She had recently broken up with her boyfriend within days of arriving to Mayflower to render assistance.

On 16 May, 2014 one of the local residents that had lost their home to the tornado was driving Brown’s truck when it was pulled over and he was arrested on driving with a suspended license.

Brown contacted the Mayflower police on 17 May, 2014 inquiring how to get her truck out of impound and the police department had a hold on it and would not release it. She also volunteered to come to the department to clear everything up and was told the officer handling the case was not there.

Later that evening Brown was with her then 8 year old daughter, when she was surrounded by several police in patrol cars in a parking lot. When Officer Mark Winchester approached Brown, she asked him, “Are you Alans dad?”

Alan is the boyfriend she had recently broken up with, clearly presenting a conflict of interest in this interaction. She was detained in the back of a patrol car for hours in the parking lot, not read her rights, threatened by the cops that they would call DHS to take her child away, and taken to the Mayflower police department. Officer Winchester continued his humiliation of Brown by taking the attached photo of her chained to a wall and sent it directly to local news KATV, an ABC news affiliate in Little Rock, AR. He also gave a biased account with no other sources that she had been stealing relief supplies from Tornado victims, in spite of her evidence and credentials that proved she was authorized to be there and could account for all goods that were disseminated. No complaint had been previously reported, Winchester had manufactured the investigation and the sting to arrest Brown on his own.

Brown was then transferred to Faulkner county jail without charge. Officer Winchester lied, using a non-existent warrant from another jurisdiction. There was no legal cause to continue to hold Brown, so the investigation was then conducted on the grounds that it was necessitated by the Patriot Act, since this was a disaster zone.

During her 24 hours in Faulkner county jail she was denied access to medication for her blood pressure. She was not even given a blanket to stay warm while sleeping on a concrete bench in the cell.

Officer Winchester removed the license plate and claimed to have mailed it to the Department of Motor Vehicles. The police chief himself was confused by why this had been done.

After her release she was required to hire an attorney and the charge was dropped in June.

This is where the story takes a turn to widespread corruption.

Officer Winchester was on borrowed time before his termination 27 August 2014 for being ineffective. He wrote the FBI a letter to blow the whistle on fellow officers that were stealing city fuel, as well as reporting officers that were working for police pay on cleanup efforts while also clocked in with the department for Exxon. He also shared concerns about an officer involved DUI that may have been mishandled. The complaint was written anonymously, however when Winchester found out that he was being fired, he informed the department that he was the whistle blower that had notified the FBI of the corruption.

After his termination he filed a lawsuit for wrongful termination against the City of Mayflower and the Mayflower Police Department, claiming they had fired him for being a whistleblower.

During all of this Melissa Brown ended up homeless for a time and also without a vehicle. She received several death threats and had already convicted in the court of public opinion due to the story that was irresponsibly, and potentially even illegally, released by KATV;  which had included her home address and phone number. She was required for safety reasons to relocate out of state.

On the 17th of May, 2016 Brown filed a civil lawsuit on her own, because lawyers in the area were too afraid of the corruption and how it would then impact their lives long after any court case. She is a self-litigant and has contacted several lawyers and practices with no luck, including the ACLU.

The City of Mayflower cannot produce any records of the investigation that Winchester built on Brown. Chief Alcon has claimed that Winchester had stolen the files before or during his termination, and that he wanted to see him prosecuted for this crime. This has never happened.

The City of Mayflower was ordered by a Federal judge to serve these charges against the ousted officer, Winchester, whom is now a private investigator that was recently certified by the state of Arkansas. The city filed a statement with the court that they are unable to locate him. Public records show that he owns a residence and has lived in that residence for several years, dating before the incident, and while he was an employee for the Mayflower Police Department. They are stalling.

Could this be because they fear that if they serve Winchester with the lawsuit he will then expose further corruption in the Mayflower Police Department? Their incompetence, criminality and corruption have been reported in media for several years, long before Brown’s arrest.

The trial for Brown’s civil suit is scheduled for 17 September 2017. While she may win, it is unlikely justice will be done, and corrupt officials in power will still remain in the town of Mayflower.