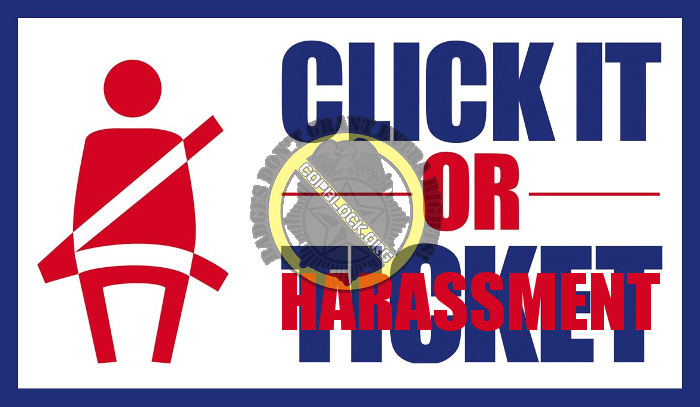 The following post was written by a CopBlock.org reader, who wishes to remain anonymous, via our Submissions Page.

On the evening of Friday August 26, 2016, my boyfriend, his old friend from school, and I were traveling from Kansas City to Middle Brook, Missouri for a camping trip at the Johnston Shut Ins Campground. We were running late after stopping for bathroom breaks, batteries, and an air pump for the inflatable mattress. Our course led us through Salem, MO. It was dark and we had on the bright headlights for most stretches of road without other drivers. Others were doing the same and when we would come across each other, both cars would respectfully turn off their brights.

We were about to head onto MO highway 72 when an oncoming car was being followed so closely by another car, that the car in back’s bright headlights were blinding us through the first car’s windshield. My boyfriend was driving my car so I could take a break from being behind the wheel. He flashed his brights at the driver, assuming the driver had forgotten to turn of their brights themselves. The car then slammed into a U-turn and we assumed the driver might be intoxicated. We were about to enter the highway when police lights came on behind us and my boyfriend pulled over the vehicle.

The officer, Tpr. Gregory R. Moravec of Dent County, badge #780, approached me on the passenger’s side of the car and I handed him my boyfriend’s driver’s license and the car’s insurance. He said he had pulled us over for speeding, which he would have had to have clocked us while coming from the opposite direction. The officer asked us where we were going and what we were doing. I explained that we were late getting to our campsite at the Johnston Shut Ins. He then asked for ID from both our friend in the backseat and me. For about 10 minutes we waited and he again approached the car and said that I had an unpaid seatbelt ticket that resulted in an active warrant. I was surprised and asked what that would entail. He said it was just going to take a few minutes to go down the road to the station and I could pay the $10 for the warrant. He then went back to his car again. After more waiting, he came back to the car and asked my boyfriend if he was “on paper”. He told the officer that yes, he is on probation for two months. Mr. Moravec said that he was going to have to put me in handcuffs. He had me stand behind my car and place my hands behind my back. I was handcuffed and he asked me if I had any weapons or drugs in my pockets. I told him no and he said he needed to check my pockets and proceeded to put his hands into my pockets, feel down my thighs and legs and then pulled up my pant legs to check my shoes. I was wearing overalls and he also checked the chest pockets. He did not offer to have a female officer present for this search. He did not ask me if I consented to have him search me. I was placed in the front seat of his vehicle and the door was closed.

I then watched as another two cars of officers approached the scene. Four cops now present, they advanced to my vehicle again, speaking to both my boyfriend and our friend, hands on their weapons, aggressively postured. This is now three cars, four officers, and hands on guns over a ten-dollar ticket and speeding. They had my boyfriend exit the car and asked to search him, which he consented to. They held him on the side of the road and then had our friend exit the vehicle, agree to a search, and held him in front of my car.

At this time, the officers took turns asking the three of us separately and repeatedly how well we knew each other, what kind of drugs were in the car, were there syringes in the car and where were they located. We continued to explain that my boyfriend and I have known each other for six years and have been living together for three years, that his friend had been a close friend since middle school and that I am a long time elementary school teacher. Mr. Moravec asked me again and then stated that since I said there were not drugs or illegal items in the car, then I would surely consent to a search of my car. I said that we were already late to set up camp and I would prefer to just get to the station to pay the $10. Visibly agitated, he stated that he was going to call the drug dog. He said that we would have to wait for the dog and then “after we waited to see what the dog found” we could proceed from there.

We waited for about thirty minutes for the dog to arrive. Mr. Moravec kept asking me if I could see where he was coming from. I wasn’t going to disagree with him, given the circumstances and my desire to be allowed to leave. He continued to say, “You can see why this seems suspicious, right? It seemed like you might be running away. And your boyfriend has a record. And you have a warrant. I mean, you can see where I am coming from, right?” He repeatedly needed to be assured that his suspicion was warranted. The dog walked around my vehicle and the fifth officer, who possessed the dog, told me that the dog alerted him that there were drugs in my vehicle which gave him a warrant to search it. I watched the officers dig through all of our camping gear, flashlights, coolers, clothing, and sniff our water bottles. The officer with the dog came up and started asking me again what he would find in my car. I still explained that there was nothing illegal in my car, I am an elementary school teacher, and we were going camping. He asked me where we were camping, where the campsite would be, and how many nights we had paid for. I answered all of his questions at which point he told me his wife is a teacher and he knew that when the drugs were found in my car, I would be immediately placed on administrative leave. He asked me how well I knew my boyfriend and our friend. The officers continued to ask my boyfriend and our friend how well they knew me and they scoffed when they said I was a teacher and said, “well, you never know.” They asked my boyfriend why he was on probation and he explained the circumstances from when he was 17 years old. The officer with the dog then came back to tell me that he was “blown away” that my boyfriend had been charged and that he just didn’t believe the story. I told him there was no reason to lie and that he was telling the truth.

We were pulled over at 10:00pm and had now been held, me in handcuffs the whole time, for over two hours. They didn’t find anything illegal in my vehicle. Mr. Moravec, who has been given awards for “looking beyond the initial traffic stop to make an arrest” in the 2013-2014 year, then told me that while they did not find anything illegal in my vehicle, the officer with the dog told him that the alert meant that at one time, there had been illegal substances in my car. I told him that was highly unlikely, considering I had purchased the vehicle from an 89 year old woman in May. He told me that “you never know”

At the station, I was walked past a drunk, shirtless man writhing around on the floor being handcuffed to a wall by a mat on the floor, instructed by officers to “go to sleep.” I was told it would be about ten or fifteen minutes to fill out the paper work. The handcuffs were removed but I was placed in shackles and left in an interrogation room for about thirty minutes. A different officer then brought me a paper to sign and allowed me to leave.

At no point was sound judgment exercised by these officers. We were cooperative, respectful, and very obviously campers driving to our campsite. We were harassed because of my boyfriend’s prior and unrelated conviction from a decade ago. We were profiled and treated as guilty until reluctantly proven innocent. None of us were intoxicated and there was no reason to assume we had illegal drugs. While I was detained for the warrant, my boyfriend and his friend were detained beyond the traffic stop, without reasonable suspicion, to wait for the drug dog that we did not consent to sniff the car, then a search we did not consent to. The use of this dog seems constitutionally suspect, since its use was unreasonable without evidence of a crime other than speeding. Plus the fact that drug dogs have been studied and found to frequently return false positives and be instructed to falsely alert on suspected vehicles.

The claim that the officer clocked us for speeding while tailing another car from the opposite direction does not seem feasible. Radar beams, like flashlight beams, spread the farther the beam travels. The spread-out beam would have been hitting the car in front of the officer and our car across two lanes. Most radar units have beam angle, or spread, of 12 to 16 degrees, or about one-twenty-fifth of a full circle. This means the beam would have a width of one foot for every four feet of distance from the radar antenna. The beam width, being two lanes wide, (about 40 feet), would be only 160 feet distant from the radar gun. If the vehicle in front of the officer was speeding faster than us, the other vehicle produced a higher reading on the officer’s radar unit, which the officer most likely mistakenly attributed to us. The inability of the equipment to distinguish between the two separate cars is lack of “resolution” and didn’t give the officer reason to flip around and follow us.

These cops were typical hillbilly, poorly trained, ignorant bullies with guns. I really thought they were going to shoot my boyfriend and his friend while I sat in the cop car. They are aggressive and foaming at the mouth for a catch. Ridiculous.