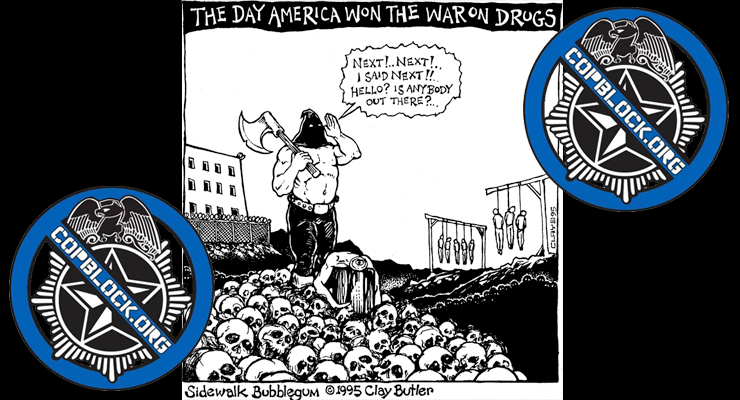 This headline is not hyperbole. When the Drug Enforcement Administration outlaws kratom by making it a Schedule I substance on September 30, it will be setting off waves of overdoses and suicides that will claim thousands of lives. And they are fully aware of what they are doing.

We are on the precipice of yet another new era of prohibition, but we are armed with the hard-won knowledge from decades of the failed drug war to inform our actions. Kratom users and advocates for self-ownership must act quickly and decisively to stop the U.S government from killing people for their own protection. Help organize and actually show up for rallies (there’s one in DC on 9/13/16). Submit public comments against its scheduling. Testify at hearings about the harmful impact this move will have. Sign the White House Petition, if you are so inclined.

Whatever you do, don’t stand idly by as lives hang in the balance.

I’ve written previously about kratom (Mitragyna speciosa), a plant in the same family as the coffee plant, which has long been used in Southeast Asia as an herbal medicine for hundreds of years. It has become increasingly popular in the United States over the past several years due to its ability to both treat chronic pain and help people addicted to heroin and prescription painkiller addicts get and stay clean.

First-hand accounts of people whose lives were turned around by kratom abound, including the story of Susan Ash, who suffered for years with undiagnosed Lyme Disease:

“I was on morphine, and because of the morphine, it was making me so fatigued that I wasn’t able to keep my job at the time, and so they put me on Adderall so that I could perform my work. With the Adderall, my previous struggles with depression and anxiety got worse. They added on the Xanax. At one point I was on all three — the benzodiazepines, the narcotics and the stimulants — in addition to Seroquel [an antidepressant sometimes used for sleep], Lyrica [a pain medication used to treat fibromyalgia], Flexeril, a muscle relaxant.”

After discovering kratom, Ash was able to quit her dangerous cocktail of addictive prescriptions and managed to stay clean.

“In a matter of two weeks, I had the energy, I had the pain relief and I had the depression and anxiety relief I needed to become a productive member of society again. It was such a stark difference and such an immediate change in my life.”

Three years later Ash formed the American Kratom Association, a non-profit that advocates for “the right of all Americans to use the natural botanical Kratom for improved health and well-being.”

This is in stark contrast to the DEA’s notice announcing their intent to place the herb on Schedule 1 as “an imminent hazard to public safety.” The notice continues: “Kratom has also been used to self-treat chronic pain and withdrawal symptoms from opioid use. Especially concerning, reports note users have turned to kratom as a replacement for other opioids, such as heroin.”

Instead of supporting and encouraging medical research into kratom as a promising means for combating the opioid overdose crisis, the DEA is using these stories as justification for banning it. The DEA also cites insufficient research to establish medical use for kratom. Of course, lack of research is not a market barrier for any of the thousands, perhaps millions of similarly non-FDA-approved supplements sold at pharmacies and GNCs. And once kratom is scheduled, researchers will have to get permission from the DEA to conduct studies with it.

The Centers for Disease Control and Prevention revealed itself as a willing confederate when it  issued a report last month labeling kratom as “an emerging public health threat.” The dubious basis for this claim? Between 2010 and 2015, calls to poison control centers increased from 26 calls to 263. Hardly an epidemic, especially considering that the few kratom-related deaths reported in the media have actually been due to users taking it in combination with harder drugs that have more serious side effects than kratom.

Walter C. Prozialeck, a professor of pharmacology at Midwestern University who wrote a comprehensive literature review on kratom for the Journal of the American Osteopathic Association, said he disagrees with the DEA’s characterization.

“Even though the ‘mytragines’ may have some affinity for opioid receptors, their actions are quite different from those of classic opioids, like morphine, hydrocodone, oxycodone, heroin, etc.,” Prozialeck wrote in an email to HuffPost. “After looking at the literature, I would certainly not classify them as classic ‘opioids.’”

Prozialeck described kratom as largely benign in an earlier interview with HuffPost, and said it doesn’t produce much in the way of psychoactive high in low to moderate doses. He called for additional research and cautioned against mixing the drug with other substances ― a concern the DEA notice also raised. But he said kratom doesn’t have a particularly high potential for recreational abuse and agreed with advocates who say the positive effects appear to outweigh the negatives. Why would the DEA close the door on something that provides legitimate pain relief and prevents overdoses—a substance whose  most serious side effects are “stomach upset and vomiting?”

Because they are fighting for their very existence.

When nearly 50% of all drug arrests are for marijuana and more states are jumping off the pot prohibition bandwagon each year, the DEA needs to quickly find more boogeymen to justify its $2 billion budget. Turning kratom into the new heroin provides even more bang for their stolen buck since it will send recovering addicts and chronic pain sufferers right back into the arms of actual heroin and prescription painkillers, in turn driving up both drug arrest and overdose rates.

This is how the DEA causes the very problems it claims to fight, and then uses that as grounds for more funding, more agents, and more authority.

Attend the Save Kratom March in Washington, DC on Tuesday, September 13!