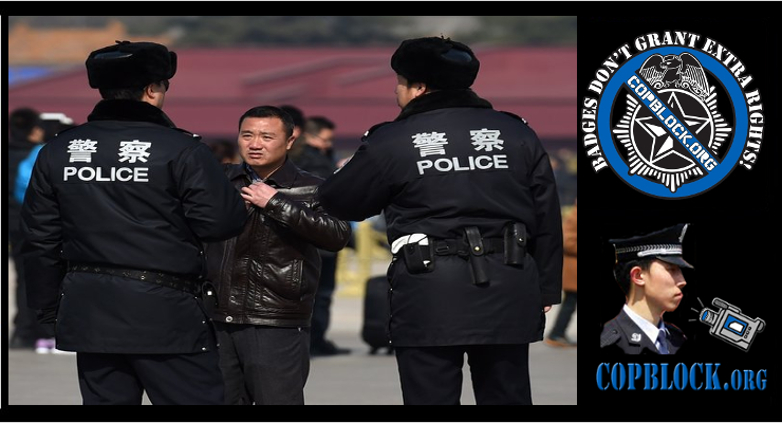 Over the years, the government of China has received much criticism for its treatment of citizens and rightfully so. Although, their prisons aren’t quite filled to the level of the United States’ prison industry (or even the state of Louisana for that matter), China’s own prisoner and human rights abuses are pretty well documented since the establishment of state communism within the country shortly after the Second World War.

However, China is apparently getting ready to overtake the United States in yet another measure of freedom for its citizens. Following a well publicized and extremely controversial fatal case of police brutality within their own country last year, the Chinese federal government has announced new reforms that center around encouragement for citizens to film the police in order to deter them from committing abuses.

Via teleSURtv.net (based in Latin America):

In a surreal twist in efforts by U.S. law enforcement to evade filming, high-ranking Chinese government officials rolled out new protocols Monday not only confirming citizens right to videotape police making arrests, but encouraging it as a safeguard against police abuse.

According to the state broadcaster, CCTV, the Ministry of Public Security states: “Police should accept public monitoring and get used to implementing the law in front of cameras if members of the public record the actions without hindering law enforcement.”

The decision delivers on promises made by Chinese President Xi Jinping to address the excessive use of force by police. Many in China were outraged by the killing last year of Lei Yang by police back in May. Yang suffered fatal injuries by plainclothes officers for allegedly soliciting sex workers in the district of Changping.

“Reforming the way the police operate forces the traditional system to improve,” said Zhang Chao, an associate professor at the Henan Police Academy.

Under the new protocols, police must carry ID on them at all times, while plainclothes officers have to present their identification when approaching civilians.

While there is no law in China explicitly forbidding citizens from filming law enforcement, individual police officers have in the past prevented people from doing so.

It may not be long before that “at least we’re better than China’s abusive police state” refrain from police apologists no longer applies.