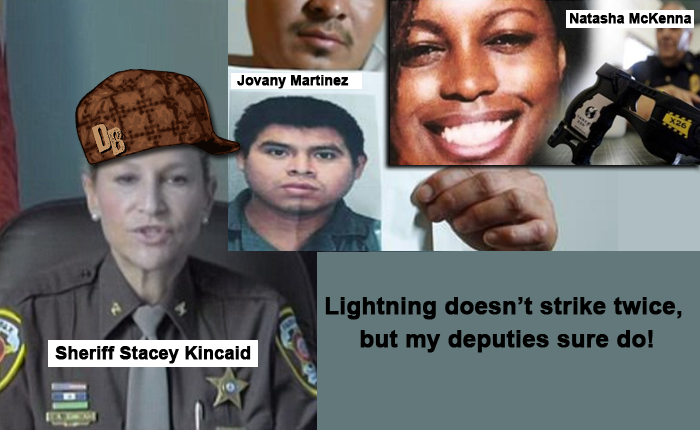 Fairfax County has taken its status as a sanctuary county for killer cops to the next level. One of the six sheriff’s deputies cleared in the brutal tasing death of Natasha McKenna has killed a second person with mental illness.

Deputy Patrick McPartlin has killed someone the last two years in a row.

On August 15, Jovany Martinez (listed as Giovanny Martinez in some reports) “had been walking along Little River Turnpike and, feeling desperate, approached a [Fairfax County Police Department] squad car and rapped on the window. Martinez told the officer that he wanted to take pills and die.”

The Washington Post article relates the sequence of events between Martinez’s first exchange with the FCPD officer and his death:

“The officer called first responders, who evaluated Martinez and decided he needed to be taken to the hospital.

Police said the officer also went to the hospital to ensure that Inova could do a mental evaluation of Martinez, in case he needed to be taken to a local crisis center…

…Martinez was discharged later that night for reasons the hospital has not disclosed, and hospital security escorted him to a bus stop on the Inova campus in Falls Church.

A short time later, police said, hospital guards responded to calls about a suspicious man at the bus stop. Police said Martinez hit one of the security guards with a metal sign post.

Just before 10 p.m., hospital security called the county’s 911 line to report a person at the bus stop with a bladed weapon. A Fairfax County sheriff’s deputy, who was at the hospital guarding a patient from the jail, heard the 911 radio traffic and went to the stop before Fairfax police officers arrived… …Martinez charged the deputy, whose name has not been released, and swung the sign post at him, police said. The deputy retreated and ordered Martinez to drop it, police said. When Martinez continued to approach, the deputy opened fire several times, striking Martinez. Martinez later died of his injuries.”

For 19 months, Fairfax Sheriff Stacey Kincaid has resisted calls to terminate Deputy Patrick McPartlin and the other deputies who participated in McKenna’s fatal cell extraction on February 3, 2015, which was captured in a video so horrific that it has been referred to as a “snuff film:”

While McPartlin has been allowed to continue collecting his nearly $90,000 annual salary, the final tally for what the first death he caused will cost taxpayers has not yet been settled. A $15.3 million lawsuit was filed against Kincaid and her deputies back in June.  Chances are good the settlement will break the Virginia record set by the $2.95 million one Fairfax County paid in the John Geer case.

What we do know is that Deputy McPartlin has the highest cost of any law enforcement officer in the county, both in terms of potential settlements and lives lost.

We also know it’s not uncommon for law enforcement officers to be involved in multiple deaths of citizens. According to a Washington Post report, 55 officers who killed people during 2015 had previously shot and killed people. “For a handful of officers, it was their third fatal shooting. For one officer, it was his fourth.”

Will lightning strike a third time with Deputy McPartlin in 2017, or will the county finally decide it’s best to part company with this double liability?

For now, the deputy remains on paid administrative leave once again.