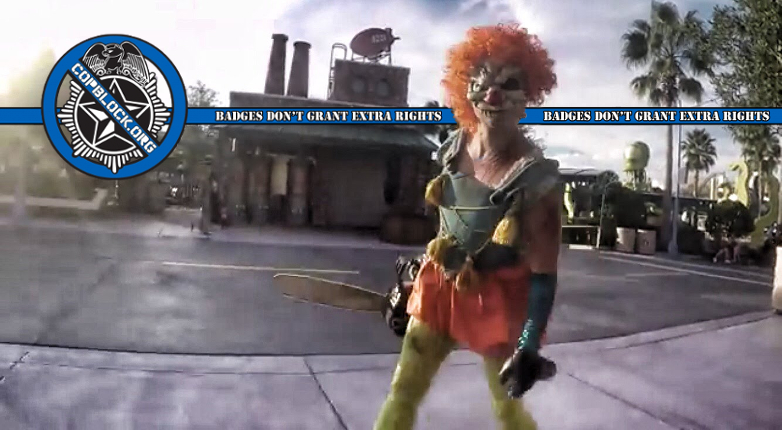 Police in Greenville, South Carolina are cautioning residents to be on the alert after multiple sightings of clowns described as “mysterious” and “scary.” In addition, unconfirmed reports have claimed these clowns have been known to carry lazers and large amounts of cash, prompting police to speculate that they may be trying to lure children into the woods for some unknown ritual.

The suspects have been described as having luminous noses and overly large shoes, which may or may not contain equally oversized feet. They have displayed a propensity to make strange noises (often very quietly) and seem to congregate near street lights. Reports have also indicated that they have an affinity for gathering near basketball courts, although no confirmed sightings have pointed toward any desire on their part to actually play sports.

So far, at least one potential hideout has been uncovered, although it was not occupied by clowns when police conducted a search of the location. Their exact agenda and motivation is currently unknown, but police are not taking this potential threat lightly.

Ryan Flood, a master deputy with the Greenville County sheriff’s office told the Telegraph that they were taking the reports very seriously.

“These kids have notified their parents they saw these clowns near the woods. The clowns had lasers and a lot of cash,” he said. “Our view is to take it seriously in case there is someone dressed as a clown trying to lure them away.”

Mr Flood said that their investigations and patrols had found no evidence to support the claims yet: “We haven’t found any clown costume stuff or irregular footprints or other indicators,” he said.

But police have begun daily patrols near Fleetwood Manor Apartments, where a number of parents said their children had come home with stories of speaking to clowns.

There have been “a lot of complaints to the office regarding a clown or a person dressed in clown clothing taking children or trying to lure children in the woods,” the administrators of  Fleetwood Manor Apartments wrote to residents in a note slipped under their doors.

Donna Arnold, one of the residents, said she called the Greenville County Sheriff’s Office because her son told her he had seen a clown behind the basketball court.

“I thought my child was seeing things,” Mrs Arnold told a local news channel. “And then the next day I had about 30 kids come up to me and say, ‘Did you see the clown in the woods?”

The sightings began earlier this month when a resident, who is not named, told the police that her son had seen clowns  “whispering and making strange noises” in the nearby woods, according to an incident report.

The resident said she later saw “several clowns in the woods flashing green laser lights.” The figures then ran away into the woods. And then, the following night, at about 10.30pm the woman said that her elder son heard “chains and banging” at their front door.

A day later, on 20 August, at around 2.30am another resident said she came across a “a large-figured clown with a blinking nose”, standing under a post light near the garbage dumpster area.” She said the clown waved at her so she waved back and kept walking.

Police however also interviewed children who told them clowns tried “to persuade them into the woods further by displaying large amounts of money.”

The children said they believed that the clowns lived in a house near a pond at the end of a trail in the woods.

The responding Greenville Sheriff’s deputy reported that upon investigating they found the house, but no clowns or any signs of suspicious activity.

Mr Flood said the last clown citing was as recent as Monday night. “We got a call from a juvenile and they stated a subject not dressed in a clown costume was seen taking photographs of children. And then shortly after a subject, who may have been the same person, came out of the woods in a clown costume and went to the same spot,” he said.

Greenville police have introduced a “see clowns, say something” campaign in hopes of getting to the bottom of this potential threat. However, they have expressed concern that the publicity generated by media coverage of the Clownspiracy, as it has been dubbed (by me), may interfere with their investigation by prompting copy cat incidents by unemployed clowns and other bored people within the area.

One example of such an instance is the video of clowns caught on neighborhood surveillance cameras below, which caused a minor scare in Florida back in 2014. However, it was eventually exposed as a publicity stunt to promote a traveling carnival that was scheduled to visit the area.

On the other hand, this is also reminiscent of the threat from Anarchists to scare innocent children during Halloween of 2015. That was, in fact, confirmed to have happened in numerous cities not just in the United States, but throughout the world. In addition, others such as serial killer John Wayne Gacy and the Insane Clown Posse have dressed as clowns in order to lure children away for nefarious reasons. It would be unwise to overlook such a warning again. As they say, better safe than sorry.

If you do spot a suspicious clown, especially if they are armed with laser beams and/or are carrying large amounts of cash, contact the Greenville County Sheriff’s Office at 1-864-467-5300 immediately, if not sooner.