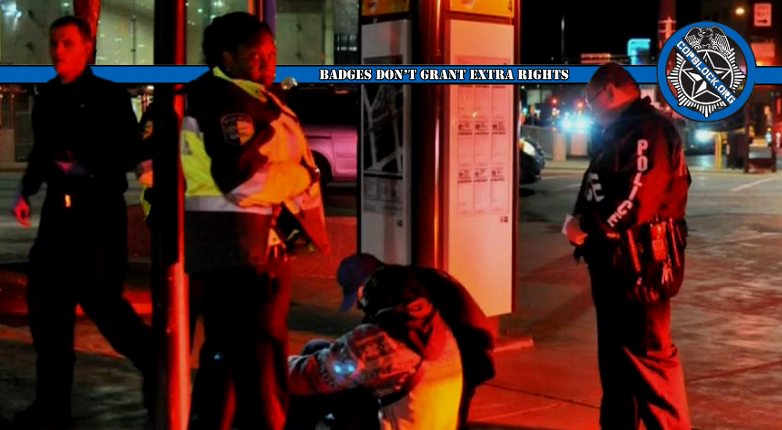 What was his diabolical crime you ask? Standing quietly and legally filming the police during a medical call, something that he does on a regular basis. (The excuse used to justify that illegal arrest was a trespassing charge.)

Of course, since that’s not actually a crime, the charges were soon dropped, although it still cost him 20 hours in jail. However, that’s where the trouble began for Officer Branch. Not only did Adelman notice on the police report that Branch had completely fabricated statements on her police report (otherwise known as perjury, which is a crime) to make it appear she had cause to arrest him, but a microphone she was wearing confirmed she was a liar.

Via WFAA8, the local ABC affiliate:

…when DART officer Stephane Branch gave her account of what happened in the report, she included supposed verbatim quotes between herself and Adelman, starting with “Sir, please stay back so the firefighters can help this man.”

“That sent up a lot of red flags because I looked at that and said, ‘This isn’t what happened,’” Adelman said.

A microphone Officer Branch was wearing captured what actually happened.

“Sir, leave – you’ve got to leave,” she could be heard saying on the recording. “I’m talking to my supervisor.”

The officer’s report also included quotes from Dallas Fire-Rescue personnel and a DART passenger, but the internal affairs investigation found those quotes were entirely made up.

Branch “engaged in conduct that was illegal or could reflect poorly on DART if brought to the attention of the public,” investigators said.

“A sworn law enforcement officer lied – thought she could get away with it – stood by her lies – and then they busted her,” Adelman said.

Of course, the amount of potential trouble she might get into is up in the air, since she has one of those Magic Suits in her closet that renders its wearer impervious to meaningful consequences for their actions, no matter how illegal, immoral, or even violent they might be.

Morgan Lyons, a DART spokesperson, has stated that the investigation has been completed. However, Internal Affairs has not yet decided just how hard they will be slapping her wrist yet. In the meantime, Officer Branch is still out there protecting and serving the shit out of people in Dallas.

For his part, Adelman is hoping she will be fired for her clearly illegal acts. However, I wouldn’t advise him to hold his breath on that. Stranger things have happened, but the fact that criminal charges for her illegal arrest and blatant perjurious actions in the process of that is a pretty good indicator that they are preparing a nice Policeman’s Discount for her and any “punishment” she receives will likely be for show and not anything of substance.