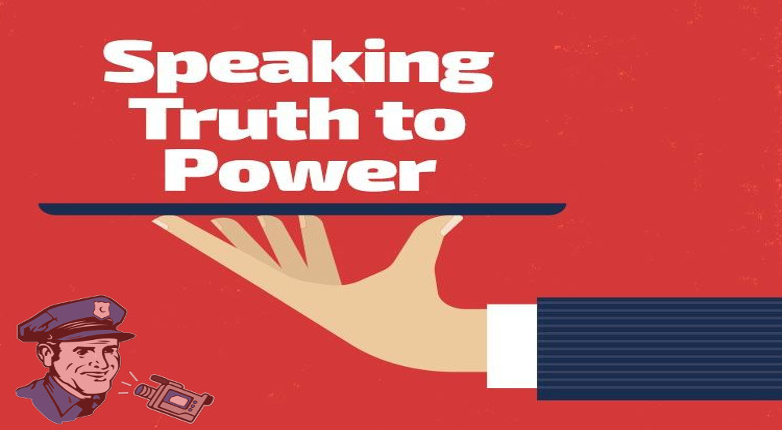 When you hear the phrase “speak truth to power” at rallies or in music or in conversation, who is the “power”? Many people might reply that it’s “the government” or “the corporations” or “the banksters” and that by speaking truth, those folks may alter their actions, become less tyrannical, and stop oppressing people in some way.

But Ben Stone, author of Sedition Subversion and Sabotage Field Manual No. 1 has a different explanation. He writes,

The phrase “Speak truth to power” is an old Quaker phrase that has been co-opted by several groups for different purposes. Although it didn’t make it into print until the twentieth century, its origin is commonly believed to be a nineteenth century description of an event in 1655 when Quaker activist George Fox was captured and brought before Oliver Cromwell. Facing the threat of death by flames or worse, Fox proclaimed without fear or respect of person, the truth as he knew it to be. Cromwell, a Puritan and a sworn enemy of the Quakers, was so impressed by this man of faith that he let Fox go free. Twice. Subsequently the story has become perverted to purvey the idea that Fox spoke “truth to power” to influence government to do his bidding. Balderdash! Fox had exactly ZERO influence on the Cromwell government.

George Fox almost certainly believed himself to be a dead-man-talking as he rebuked, condemned, and reviled the murderer, Cromwell. The fact that Cromwell’s conscience struck him and caused him to act in mercy towards Fox speaks to Cromwell’s Christian upbringing and parentage and not to the absurd idea that facing death, Fox tried to use the government that he so reviled. The witness of George Fox’s life proclaims that any words he spoke to Cromwell were spoken with a full knowledge that he was speaking to the ages, not to some usurper on a man-made throne of blood and gore! Thus we have the key. We must boldly speak truth in the face of power. Not to influence power, but to state truth for posterity’s sake.

In addition to speaking truth to power for posterity’s sake, I would add that such tact is suggested because the speaker is being true to themselves. They are acting deliberately and choosing to communicate what they know as just, rather than be swayed by implied threats. That can bring an enormous amount of mental well-being.

Filming the police falls under this category of speaking truth, if done properly. If you, as an activist, are filming police so that police will be more accountable, or so agencies will hold police more accountable, you are not a friend of freedom. You are a statist. Stop reading this book, go lick the boot of your master, and leave the activism to those of us who know who our enemy is. If, on the other hand, you understand that police are nothing but violent enforcers for their State masters, and their only real job is to kill, maim, cage, and destroy for the purpose of intimidating the general public, then we are on common ground. Eventually governments on all levels will outlaw the filming of police, again; more on this later. But before that time comes, documenting the activities of police is a critical aspect of speaking truth for posterity. The only way we can justify the irregular warfare that is about to erupt is if we have thoroughly documented the brutality of police.

The only way the rest of the world can know the oppression you face in your neighborhood, and in your town, is if we film, not only police, but every oppressive action of the State everywhere it happens. Filming, recording, exposing, and documenting everything we can document is an act of speaking truth for posterity. This is true in the Americas, in Europe, in Asia, and everywhere governments use their enforcement boot to choke humanity, but it is also true in the neighborhoods and villages of Pakistan, Yemen, and other places where governments rain death upon the innocent for the shear purpose of causing terror and hate, while filthy politicians in the West strut around claiming they are bombing for peace. In the future our generation will be judged based on how we as individuals respond to the vile actions of governments around the around the world as they murder and maim the innocent in the name of peace.

I strongly agree with Ben on the futility of filming the police with the goal of making their outfits more accountable. That is an impossible. People who claim the legal right to steal from us can never protect us. Indeed, they are incentivized to become more tyrannical. And they will continue on that trajectory until you and I each withdraw our funding, consent, and ultimately, hold them individually accountable for their actions just like we would any other street criminal. [As Ben goes into later in his book, the idea of state justice (what we may rightly call the “injustice system”) differs substantially from vigilante, or true justice.]

But I disagree with Ben in the carte blanche labeling of police as our “enemy.” Some police employees may have been motivated by good intentions. They may have pursued a career in policing without thinking deeply about the double standards upon which their institution is based. If treated as enemies, such individuals will be less likely to admit to themselves what they know (that the policing model is fundamentally flawed) and instead, dig in their heels and immerse themselves in the culture of the Thin Blue Line. However, if police employees are viewed not as a monolith, but as individuals, who can each use reason to make their own decisions, they may ask questions, speak out, and extricate themselves from their chosen path as did Sergio Virgillo and Raeford Davis. Indeed, the page CopBlock.org/WelcomeLEOs was created to help make the latter more likely. Sedition Subversion and Sabotage Field Manual No. 1. is a 165-page book authored by Ben Stone (aka Bad Quaker). It can be bought for $10 via Paypal, a debit/credit card, or with Bitcoin or other cryptocurrency. Or, you can download a .pdf, .mob, or .epub for free.