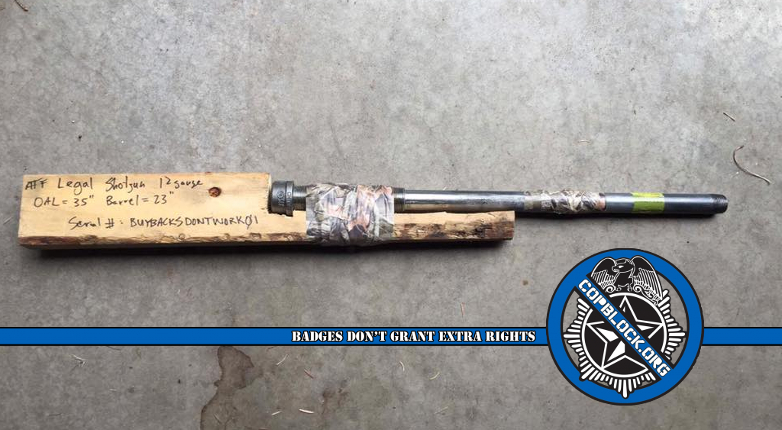 Although largely ineffective and mostly just for show, gun “buyback” programs are pretty common nationwide. They allow local governments and police departments to put out PR stories saying that they have removed “X” amount of guns from potentially falling into the hands of criminals.

In reality, the low amounts paid for guns turned in at these type of dog and pony shows pretty much guarantee that the vast majority of those participating will only be giving up unwanted and often poorly maintained guns that barely fit the requirement that they be in working order, if at all.

Earlier this week, during a buyback program held by the Minneapolis Police Department someone took that to the next level and turned in a block of wood with a pipe duct taped to it in exchange for a $100 dollar gift card.

Via the Washington Free Beacon:

Minneapolis police purchased a homemade shotgun consisting of a piece of wood and lead pipe during a gun buyback program on Saturday.

The Minnesota Gun Owners Caucus, a state-based gun rights groups, announced on its Facebook page that a man had been paid $100 in gift certificates for a makeshift shotgun at the event. A picture of the shotgun posted on the group’s page illustrates the primitive nature of the firearm. The serial number, written in marker on the piece of wood, reads “BuyBacksDontWork01” and demonstrates the gun was created as a statement against such programs.

Some people have expressed doubt about whether the story was real based on the idea that the gun was “obviously” not a functional weapon and wouldn’t be accepted. However, Minneapolis police spokeswoman Catherine Micheal confirmed that it was accepted during the buyback event, stating that it had been inspected and found to be operable in spite of it’s crude construction. And in all likelihood it is very much the case that this chunk of wood and pipe is a legitimate shotgun.

While the construction is incredibly crude in this instance, this type of shotgun is in fact a real and very functional firearm. Known as “slam fire shotguns,” homemade, manually fired shotguns are a real thing. Essentially, they consist of two pieces of pipe, a firing pin, and an improvised handle. The firing pin is installed within one of the pipes which is slightly larger in diameter than the pipe that holds the shotgun shell, which is placed within the larger pipe. In order to fire the gun, the inner pipe is manually pulled back against the firing pin.

The design of these improvised weapons can be extremely rudimentary as in this case, however just by putting a little more work into it and upgrading the materials used slam fire shotguns can be turned into very effective, but cheap weapons. If you watch the video embedded below, you’ll see an example of just how much potential one of these could have in the hands of a knowledgeable and skilled gun enthusiast.

Much of the reaction to this story has been to mock the effectiveness of gun buyback programs. There’s plenty of good reason for that. Now that this has gained a bit of attention people opposed to gun restrictions could set out to thwart buybacks by spending a few dollars (or less) on building slam fire shotguns simply to turn them in at one of the buybacks. In fact, someone has reportedly already (this time unsuccessfully) attempted to try that approach by showing up at one such event with a “duffel bag full” of them. Of course, it likely wouldn’t be long before the police responded by not accepting them or making the exchange value low enough that it wouldn’t be worth the trouble.

There is a larger point that this highlights about gun bans, though. It’s simply impossible to legislate gun possession out of existence. One of the biggest flaws in the idea of gun bans is that, unless Superman comes along and uses his super speed to round up every gun in the world, then squeezes them into a giant ball and throws them out into space, guns will still exist and criminals will still acquire guns. In fact, the reality shown by this is that, even if he did do that and then every gun factory on the planet was bulldozed over, people would still have the ability to fairly easily manufacture a firearm that they could then throw at Superman after he deflects all their bullets. (I’m purposely leaving out the fact that gun bans never actually apply to all weapons just for the sake of argument.)

Zip guns, which slam-fire shotguns are a subset of, are nothing new. They were widely used by resistance forces in occupied areas during the Second World War. They were simply and cheaply made and can be accomplished as a “DIY” project. The United States Army even had a mass produced version of a zip gun made with the intention of airdropping them en masse into the Nazi occupied territories of Europe. While they were not particularly accurate, long lasting, or effective when compared to military issue weapons, you potentially only had to use them once against an occupying soldier in order to acquire a better firearm.

Slam fire shotguns are legal in almost all states within the United States, but are mostly owned by collectors or people who just appreciate the novelty of them here. That’s because of the availability of professionally constructed guns within the country. However, not surprisingly, zip guns are quite popular in places with restrictive or outright prohibitions on guns.

Improvised firearms are most commonly encountered in regions with restrictive gun control laws. While popular in the United States in the 1950s, the “zip gun” has become less common because of the greater ease of obtaining firearms. In India, use of improvised country-made pistols is widespread, especially in the regions of Bihar and Purvanchal. The manufacture of these weapons has become a cottage industry, and the components are often manufactured from scrap material, such as gun barrels fashioned from trucksteering wheels.[3] In areas like South Africa, improvised firearms are more common. In a study of Zululand District Municipality, South Africa, it was found that most improvised firearms were crude, 12-gauge shotguns, with a simple pull and release firing mechanism; like the .22 rimfire cartridges; shotgun shells also operate at low pressures, making them more suited for use in weak, improvised barrels.[8] Even in the absence of ammunition, homemade powder can be used; such firearms were the subject of a crackdown in the People’s Republic of China in 2008.[6]

People will find a way.