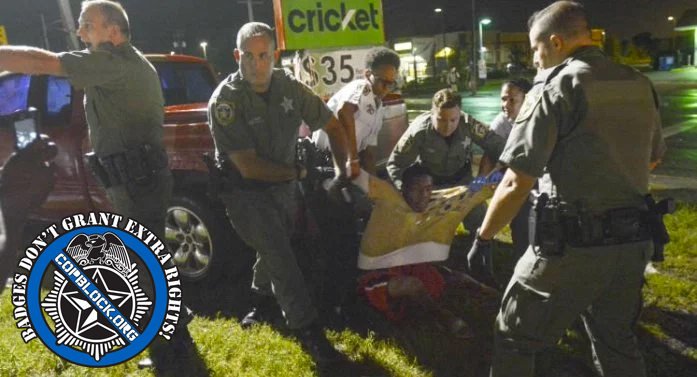 The following editorial was submitted by Mack Sullivan. If you have a story of police misconduct or abuse, please feel free to share it with us using the submission tab. Also you may chime in on law enforcement culture or render an opinion an a certain police incident. For those of you interested in becoming more active in spreading the message that “Badges Don’t Grant Extra Rights”, check out the CopBlock Network to get involved with like minded individuals passionate about standing up to the police state.

Levonia Riggins is America’s latest victim of the war on the drugs, the 22 year old was killed after a 30 day investigation into illegal narcotics culminated with a SWAT raid on his residence. During the raid the police found two grams of cannabis and murdered Levonia Riggins. These military style raids conducted by police SWAT teams often have sloppy  results similar to these every day.

Amid a nearing daily phenomenon of systematic tragedy, it is easy, given the consistency, for one detached to confuse current events with the eyes reserved for television shows, movies, twitter, as they are often viewed on the same screen. However, when the same tragedy decides to film an episode in one’s backyard, there is separate stream of attention yielded to cope with the reality, especially when this episode follows a very familiar script. Levonia Riggins, 22, was shot and killed by a Hillsborough County SWAT team during a raid of his home, justified by a narcotics warrant. Police found 2 grams of marijuana during the raid. Undercover officials had purchased marijuana from Riggins and therefore felt fit to raid his Palm River home on August 30th. At face value, the killing of Levonia Riggins is an unjustifiable murder of a young black man by law enforcement due to the invalid motive of raid, and the nature of which the police act was conducted.

Allow reasoning to begin by noting that officials held a narcotics warrant when their probable cause, marijuana, is not listed as a narcotic by the Federal Controlled Substances Act. This factor qualifies Riggins not only for compensatory damages (of property, like the window broken through in his bedroom where he was shot), but also punitive damages, for why and how the raid was conducted.

Deputy Caleb Johnson, 32, has served 7 years with the police force and 3 years with the SWAT team, a cumulative 10 year term on law enforcement. This term rules out any arguments that Johnson lacked necessary training or experience to asses the situation. Unfortunately, we usually are left with only the officer’s account of such tragedy, oftentimes biased. However, our current situation leaves a both sizable and sizable gap in the modern police system that we can fill with ideological critique. An officer of 10 years still did not use any sedation or control techniques on their subject. Johnson acted as any civilian would in his situation. This displays a common paradox we see many times in these tragedy which states that; if you act as a civilian in an intense situation, you immediately discredit your training to protect civilians in tense situations.

All in all, the death of Levonia Riggins, though displaying many traits of modern police injustices, can not be reduced to a statistic. Witnessing injustice in one’s backyard renders a much more personal, and inherently real, disgust. From a revolutionary perspective, this what we have been waiting for. This is the time to take action. All boundaries are now broken between an individual and their cause. this is an injustice, in our community and in our time. Most are displaying signs of shell shock, reasonable, however, in order to make worth of a life lost years early, justice must be made in the of Levonia Riggins.

If you feel that the actions of Caleb Johnson are not becoming of an officer and that police should stop conducting raids on behalf of the war on drugs, Please call the Hillsborough County Sheriffs and voice your disappointment with their judgment, tweet at them, or leave a comment on their Facebook page.