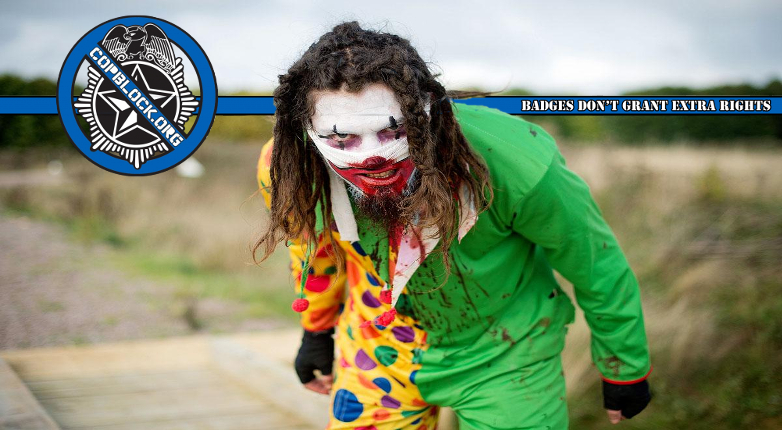 Last week, I reported on the dangerous, laser wielding clowns that have pretty much done nothing but (reportedly) stand around wooded areas flashing wads of cash in South Carolina. Since then, there have been several developments and the clowns seem to be both multiplying in number and spreading to other areas. Among those developments are one in which a clown may have actually threatened a child and one in which a (possibly innocent) clown was threatened with a machete.

In South Carolina, Greenville Police Chief Ken Miller held a press conference declaring that they are taking this “very seriously” and that anyone spotted dressed as a clown would be arrested based on a law which makes it illegal to wear masks. This clown prohibition was justified by additional recent scary clown sightings that have occurred since the original reports. Since such mask bans are rarely enforced, Chief Miller’s clown ban does bring up some legal questions of selective enforcement and profiling by law enforcement.

Police have responded to four clown-related calls since Monday, two of which occurred at Shemwood Crossing Apartments. Another was reported on Deoyley Avenue in the Pleasant Valley community Tuesday afternoon.

In the most recent sighting Wednesday night, officers responded to Park Haywood Apartments on Congaree Road after a woman reported seeing a middle-aged white man in clown-like facial makeup and red hair standing outside the laundromat. The woman told police the clown stared at her as she walked out but didn’t speak to or follow her.

In addition, Police Chief Lance Crowe of the Travelers Rest Police Department reported that they had two more reported clown sightings at an apartment complex. One sighting was claimed to have happened at a building number which turned out to not actually exist once officers investigated. The other creepy clown was supposedly seen in an area outside the same apartment complex. However, when officers responded several people standing outside at that location claimed to not have seen any clowns that day.

It’s unclear at this point if police suspect the clowns of having some sort of magical powers that would enable them to make entire buildings disappear, render themselves temporarily invisible, or wipe out the memories of witnesses through some sort of hypnosis. I also haven’t been able to get local police to comment on whether they suspect some of the people they encountered standing outside may in reality be clowns disguising themselves as regular people in order to throw them off. At this point, it’s unclear if Chief Crowe will be instituting his own clown ban as a result of these sightings.

Chief Miller is not at this time sure if this is a case of the same clowns being sighted multiple times or if they have worked out some sort of schedule in which different clowns rotate in and out. Also according to Miller, the one thing that all of the clown sightings have shared is that none of the clowns have made any attempt to communicate with anyone, outside of some potential signals with their lasers. Instead, they just stand in an area where they can be seen from a distance and “watch the reaction of individuals.”

However, a reported clown sighting in Ohio last week is the first known sighting involving some sort of documented claim of a physical attack by the clowns. A kid on his way to school was allegedly chased by a knife wielding clown and only escaped after throwing a rock at his masked assailant. Although, there’s an obvious connection in timing to the South Carolina incidents, there has also been some speculation that this may be a rogue clown, who plays by his own rules.

Either a creepy clown has broken from the pack — or there’s a brand new one.

A 14-year-old Columbus, Ohio boy on his way to school Tuesday morning was chased by a black-clad man wielding a knife and wearing a clown mask, NBC News reported.

The petrified boy was able to get away from the freak by hurling a rock at him and running to a bus stop, police said, noting that officers were canvassing the area Thursday afternoon.

The boy got to school and immediately reported the incident to his teachers but no arrests had been made as of Friday morning.

Denise Alex-Bouzounis, a spokeswoman for the Columbus Police Department stated that they are too are taking this clown menace very seriously. (Once again, there was no immediate announcement of a clown ban similar to Greenville’s, however.)

Meanwhile, in North Carolina a man reportedly turned the tables on the clowns, chasing one back into the woods with a machete after yet another sighting near an apartment complex in Greensboro.

Another witness chased down the clown with a machete, but was unable to catch up to it before it disappeared into the woods.

Officers searched the area but couldn’t find anyone matching the clown’s description, Greensboro Police told the Daily News, and suspect this might be a copycat effort after similar reports over the past week.

A clown was seen in Winston-Salem, North Carolina, on Monday trying to lure children into the forest with treats.

Most of the clowns seem to follow a somewhat familiar pattern of living in the woods and appearing in or around apartment complexes. The woods would seemingly be a logical place for them to hide out and the apartment complexes offer access to lots of people. In addition, these clowns do seem to be rather more agile than typical clowns since several reports have included descriptions of them outrunning witnesses that have attempted to pursue them, which is difficult to do in oversized, floppy shoes.