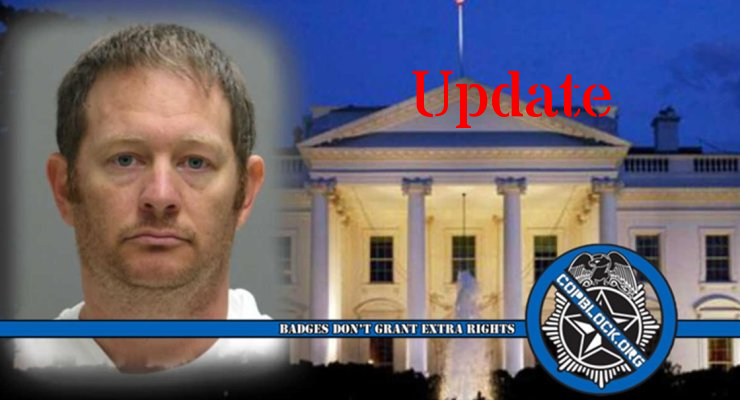 Last year, CopBlock Network contributor Asa J posted about the arrest of Lee Robert Moore, a Secret Service agent assigned to the White House. Agent Moore was busted as part of an online sexual predator sting after talking dirty and sending sexually explicit photos to someone he thought was a 14 year old girl. He also tried to set a meeting to have sex with the “teenage girl” near Dover Air Force Base.

Unfortunately for Moore, the 14 year old girl he was talking to on the internets was actually an undercover agent with the Delaware Child Predator Task Force. Instead of meeting with a young teen girl he ended having to have a meeting with members of the Maryland State Police. According to Asa’s previous post, during that meeting he admitted to officers to wanting to have sex with minors, court documents say. He also confirmed that he has used online dating apps to talk dirty with underage girls before.

Now he’s been moved to Florida to face the first in a series of trials in a related, but separate case. Although details are being kept “on the downlow,” he is accused of trying to lure an underage girl in West Palm Beach into having sex with him.

Moore, who worked as a uniformed Secret Service officer based at the White House, has been locked up since he was arrested in November on a related federal charge in Delaware.

Moore “sought to use mobile technology to sexually exploit multiple minor, teenage girls from one of the most secure places on the planet. He did so while in the presence of other highly trained law enforcement officers and just yards from the President of the United States, his family, and senior administration officials he was then protecting. … The brazen and self-absorbed nature of his conduct is simply breathtaking,” federal prosecutors wrote.

Moore was recently moved to the Palm Beach County Jail after the Federal Public Defender’s Office, which represents him, announced that he wanted to face the most serious allegations against him first in Florida.

Moore, who now has a beard, was dressed in dark blue jail scrubs and was handcuffed and shackled during his brief court appearance Tuesday. He spoke only briefly with U.S. Magistrate Judge Dave Brannon and is expected to remain locked up while both federal cases are pending. No trial dates have been scheduled yet.

Federal prosecutors in Delaware said Moore, whose duties included guarding the White House, frequently engaged in online sex chats while he was supposed to be working.

Investigators said that, in one chat, Moore asked an undercover officer he thought was a 14-year-old girl to send him something “exciting” because “work sucks today.” He was checking IDs for people entering the White House complex that day, according to court records.

In another online conversation, he sent a photograph of his penis to one of the undercover officers who was posing as a teenage girl, according to court records. In another, he sent a non-explicit video of himself in uniform from the White House, authorities said.

Moore also destroyed digital evidence of his misconduct after he found out he was under investigation and was about to be arrested, according to federal prosecutors and agents from Homeland Security Investigations.

Those last two paragraphs are rather interesting. Instead of doing what the prosecutors asked them to, the Good Agents at the Secret Service went to Moore’s house and effectively tipped him off that he was being investigated and would be arrested soon. Moore made good use of that information by attempting to destroy the evidence of his creepy behavior.