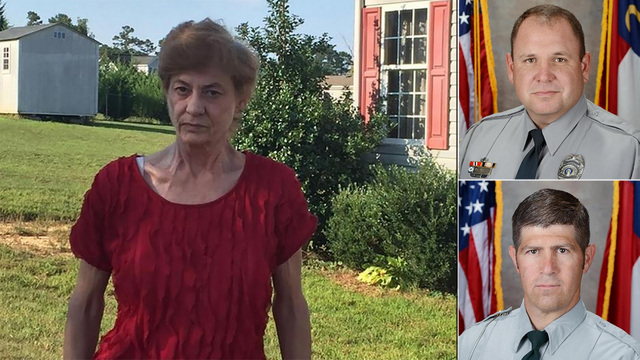 Choosing to disregard the law, two Gaston County Police officers ignored the fact that a woman was in violation of the city ordinance dictating that front lawns are maintained and kept in an orderly fashion. After multiple complaints from neighbors, Kevin Murphy and Sgt. Bob Battle were dispatched to Sonya Champion’s residence. Champion, a 55 year old cancer patient, was expecting a fine when the officers showed up to her house. But instead of attempting to gain her consent in the city’s extortion racket, the officers cut the lawn for her.

Her son had been picking up extra shifts to help with the financial load, since she was unable to work. Plus their mower was broken and she was incapable of keeping up with the yard, which had grown up to as high as three feet in some places. It’s not clear how long it took for the cops to finish the yard work, but even if took all day this is still better time spent than participating in the state’s revenue generation racket, harassing people over plants, and not finding murderers and rapists.

I would imagine her neighbors felt like total assholes after they realized the lawn was untended due to Sonya’s serious health problems and her children’s dedication to support their mother. The fact that none of them took the time to offer to help, alludes to the fact that they might not have been the best neighbors in the first place. A better option than snitching on your neighbors for not mowing their lawn, would’ve been to investigate if there was a reason for the disarray and see if it is something you can help with. After all if you’re not willing to go over there yourself, why would you call a man with a gun to handle a simple problem?

In fact, people have spent time in jail due to neglecting their lawns and I think we can all agree that when the state goes to those extremes, the crime is the punishment.

While Bob and Kevin are probably really great guys would they have placed their professional obligations aside had Mrs. Champion not been ill? After all they are police officers not a gardening crew and the idea that they go around cutting everyone’s overgrown lawn in order to avoid forcing them to give money to the city through code enforcement violations is ridiculous. It’s even possible if not plausible that the department set it up as a publicity stunt. However, there is no evidence to that, but the police have been caught in similar stunts while trying to get people to “support blue”.

In fact the only reason this story made headlines is in attempt to humanize the individuals behind the badge. With an average of three people killed by police every day in the US, one can see why the cops are seen as nothing more than drones mindlessly and violently enforcing laws regardless of their conscience. The fact that the cops are human and capable of emotion is indisputable and that is where the problem itself lies. The members of the ‘Thin Blue Line Gang” are willing to put aside their own ethics and morals in order to protect murderers, thieves, pimps and rapists within their ranks; often with impunity or a lesser punishment due to their position of trust.

There is only one profession that has to pull publicity stunts and run PR campaigns to humanize itself to the population – the police – Why is that? Because unless you live in the middle east the only people you have to worry about bursting through your door and into your living room with automatic weapons and the intent to do harm is the police and gang members, but its getting harder to tell the difference now-a-days. After all, the greatest criminals in history were only able to maintain their dominance with the support of the people.