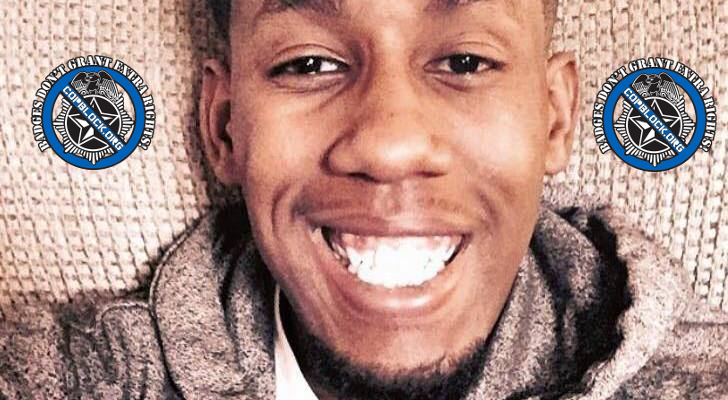 In 2016’s February, 23 year old Christopher Davis was killed by police in Muskego Wisconsin. Following an investigation that took months to disclose, his killers were cleared of wrongdoing. Department Of Justice (DOJ) documents revealed numerous details, including the cop who planned the reckless sting that killed Davis. That officer, it turns out, also works with the Walworth County Drug Unit, and isn’t a stranger to sacrificing futures.

The bullet that killed Chris Davis, DOJ’s reports show, came from Walworth County Deputy Juan Ortiz’s glock. Initial reports only indicated Davis was in a car with a driver who refused Ortiz’s orders. Although little else was reported, DOJ  revealed the irresponsibly planned sting which killed an innocent person. Ortiz, however, hadn’t been the organizer.

Other involved officers told investigators that Ortiz was to be the backup for a plan created and pushed forward by Village Of East Troy officer Jeff Price. Reports show Price used a man who’d been arrested during a domestic incident as an informant to attract random, suspected dealers from Milwaukee. “Random” because the informant described to investigators how Price urged him to call number after number. Some weren’t available, others could get there but needed time more time than Price would allow.

Davis himself and friend Jose Lara–according to Lara’s statement and Davis’ cousin, a US Army soldier–were going to inspect a car. They’d wanted to buy it, though a trip on the freeway made Davis uncomfortable. Lara told investigators that’s why Davis allowed Lara to drive him and another individual–Roberto Nieves. Nieves’ name was redacted from reports though disclosed in articles written on the incident.

Lara say’s while driving to look at the car, Nieves’ asked they take him to meet someone who owed him money. Lara initially protested, stating it would take them far out of their way. He eventually agreed while under the impression it would be quick. Lara insisted that he and especially Davis knew nothing of the drugs Price’s sting aimed for.

He’d also said Nieves was on probation, known to lie, and that he was worried what Nieves was saying. After arriving at the restaurant officers sprang their trap, and Nieves begged Lara to go. Shots were fired and Davis killed as Lara realized the mess Nieves had gotten them into, according to his DOJ interview. Officers say Lara drove into them, though this wasn’t confirmed and no police were injured.

With Davis’ head wound bleeding all over, Lara went into autopilot and sped towards Milwaukee. He’d hoped to find familiar ground, and locate a hospital. Police were able to crash and flip Davis’ car, and capture Lara instantly. Nieves ran and hid in the forest for some time, and was later apprehended. East Troy Village officer Jeff Price was interviewed by investigators, as well as those who helped in the sting.

Price told investigators he’d been informed of a man who’d been picked up on domestic charges. According to the DOJ report, police who’d arrested the man showed Price 14 grams of cannabis they’d also recoverd. The man then allegedly admitted to being a dealer, and officers used a scale recovered from a search as evidence.

Price then stated “there was nothing he could do regarding his domestic violence charges”, reads the report, “but could cooperate with officers” to reduce his drug charges (pg. 134). He was then questioned on what drugs he could obtain, Price wanting “the dealers to travel to the East Troy area to meet.” At this point, Price admits to investigators he’d worked part time with the Walworth County Drug Unit since 2011.

Price’s first attempts to recruit officers for the plot failed, page 134 reads, as those officers were tied up with other assignments. Price was persistent however and, after the informant contacted a cocaine dealer who was dry, asked instead he bring marijuana to cut on time. Price told the informant they’d “stop him [the dealer] on a traffic violation”. Exactly how Price could guarantee a traffic violation would occur to allow for a lawful stop is unknown, and up to your interpretation.

Price then tells investigators Deputy Ortiz, East Troy Village Officer Aaron Hackett, and Walworth County Deputy Chief Jeremy Swendrowski became available to help, but didn’t explain how. Hackett, during his interview, explained how Price talked him into helping create a plan which a couple participants later felt wouldn’t work. At one point, Hackett asked if he could go home, as he was off duty. Price implored him to stay, stating he need Hackett.

Price’s informant attracted at least two dealers to a gas station and burger king to be captured. Price states he conducted a stop of one vehicle then searched it after claiming he smelled cannabis. He called in Ortiz to finish so he could stop a second vehicle before Lara, Nieves, and Davis ever came into the picture. During this second stop, Davis’ car arrived and the incident ensured which killed him.

As it turns out, the Walworth County Drug Unit (WCDU) is quite fond of bribing informants with promises of reduced drug charges. In 2014, Wisconsin Watch published a damning article detailing that drug unit’s exploitation of questionable college kids.

In 2011, then-UW-Whitewater student Javonni Butler was arrested after he sold cannabis to an informant wearing a recording device. Moments after his arrest, Wisconsin Watch reports, officers said that if he bought drugs, and convicted others, they’d “sweep this under the rug.” If not, then they’d happily leave him to face years in prison, a $10,000 fine, and misdemeanor charges. Butler refused to fall in line and, after pleading guilty, spent 45 days in jail and was removed from his city council seat. He’d also been suspended from the UW college system, and lost all eligibility for financial aid.

Butler described WCDU’s practices as “pitiful” and “disgusting”. “They pretty much put kids in a spot until they have no choice but to snitch”, he explained to Wisconsin Watch. Although the unit refused to comment on whether it still used student informants, UW-Whitewater Police Chief Matt Kiederlen says his department has used at least 20 within the last two years.

According to a Rehabs.com study, Whitewater ranks #11 in America for on-campus drug arrests. UW-Milwaukee PD refused to comment as well despite their policy showing they harvest juveniles, felons on probation, and the drug dependent for informant roles. According to Wisconsin Watch, UW-Whitewater’s informant program and, subsequently, campus drug arrests shot off the graph around 2011.

Although it’s unknown if Jeff Price participated in this, he did work with the unit during the same period. Given that fact, it’s not surprising his plan’s general framework is identical to what occurred with Javonni Butler and many others at Whitewater. Such operations are widely criticized for exploiting vulnerable people, and then placing them into dangerous situations.

One of the dealers Price’s informant contacted threatened him if set up, (Pg. 136). The informant was shaken, and Price asked if he wanted to continue striving to get his charges reduced. He decided to try again. Informant operations are volatile, even when the plan is sound. Price’s wasn’t, and this fact is scarcely debatable.’

Town of East Troy PD Sgt. Paul Schmidt, who was unexpectedly drafted into the Davis plan, wanted nothing to do with it. He and another officer, Craig Knox, were finishing up a training class when Price radioed Knox. Neither were in uniform, and Schmidt didn’t even have a gun. They also lacked tactical vests, and Knox carried a personally owned gun. Hackett similarly was off-duty when approached by Price, and drove a personal car.

“It was not a good plan”, says Schmidt, stating he and Knox “should not have taken part in the potential arrest” (Pg. 31). Price’s plan also relied on baiting any random dealer using the informants car, assuming they’d know what it looked like. Schmidt and Knox were so poorly “briefed” that they thought this was the target vehicle. “Schmidt felt they didn’t have enough information or manpower to attempt an arrest”, page 32 of the investigative report reads. Hackett recalled that Price himself and the Deputy Chief discussed scrapping the trap for the exact same reasons, but Price insisted.

All and all, Christopher Davis died as the result of a randomized fishing expedition that even other cops found irresponsible, and faulty. When news broke that Deputy Juan Ortiz wouldn’t be charged, outlets including the Milwaukee Journal Sentinel printed Price and Knox’s names, but left out all context and didn’t mention the others.

All anyone needed to do was read the DOJ report to clear Chris Davis post-mortem, and discover the plan that killed him. Instead, these outlets painted Davis as a drug dealer when both Nieves and Lara said he was entirely innocent. One must ask: Was Chris the first killed by the Walworth County Drug unit’s long trek of quiet sacrifices? Or are there others stuffed under the same rug that Price told informants their pot charges would go? Chris Davis left behind a fiancé, family, and was mourned by dozens of high school friends. Ortiz became the fall guy and walked, along with those even more responsible than he.